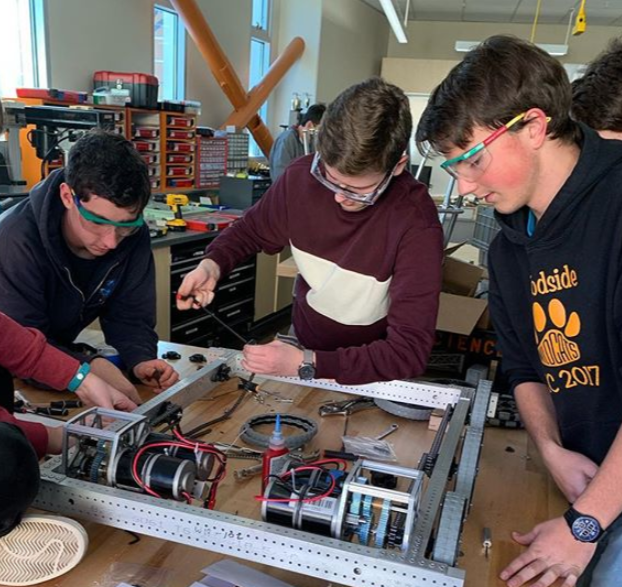 After nine full weeks of building their robot, Woodside’s robotics team—Team 100—will not be able to compete in regional and national championships due to the coronavirus.

Scoring in the competitions is based on how well robots are able to accomplish specific objectives; this year, teams had to design their robots to throw balls into a goal and hang from a bar.

“From the first Saturday in January until mid-February, you have a six-week build period, and then after that, you’d have to put your robot in a bag, and you couldn’t touch it anymore,” said team captain Peter Klopp. “This year, they removed that rule.”

Due to the change, building this year’s robot was a far greater time commitment that extended into March.

“The no bag rule had allowed us to be a lot more ambitious with the robot at the expense of basically endless build season, where we worked seven days a week,” said Klopp. “We’ve been here every day since January… It’s a 40-hour work week, basically.”

Parent volunteer Jay Verkler was impressed by the team’s efforts.

Now, with both the San Francisco and Houston competitions canceled and Lancaster outside of the district-outlined travel boundaries, the robot will not have the opportunity to compete at a national level.

“We have a robot 99 percent physically done and 70 percent programmed, and we aren’t going to be able to take it to a competition,” lamented parent volunteer and assistant coach David Beaver.

Given all the hours they put into their robot, the team plans to finish it regardless of the lack of competitions to take it to.

“One of the exceptions in the official district policy is small groups after school,” explained Beaver. “Under the policy, we can keep working, as long as we meet in small groups.”

The transition to online school will complicate the process, especially as the team is unsure if they will have access to Woodside’s campus.

“We have packed essentials that we can take off campus,” Klopp said. “But, working using school resources, even if it’s done independently, is uncertain.”

After completing their robot, Team 100 plans to enter it in smaller, more recreational competitions such as the local Cal Games.

“Every year, we usually go to one or two off-season events, which are basically put on by the schools,” said Klopp. “They don’t qualify for any other events; they’re usually just for fun or for bragging rights.”

Verkler hopes that FIRST will plan future competitions with the same objectives so that Team 100 will have the opportunity to use their robot on a larger scale.

“There’s a lot of finished robots out there that want to compete, so I have to believe that there’s a market demand,” said Verkler.