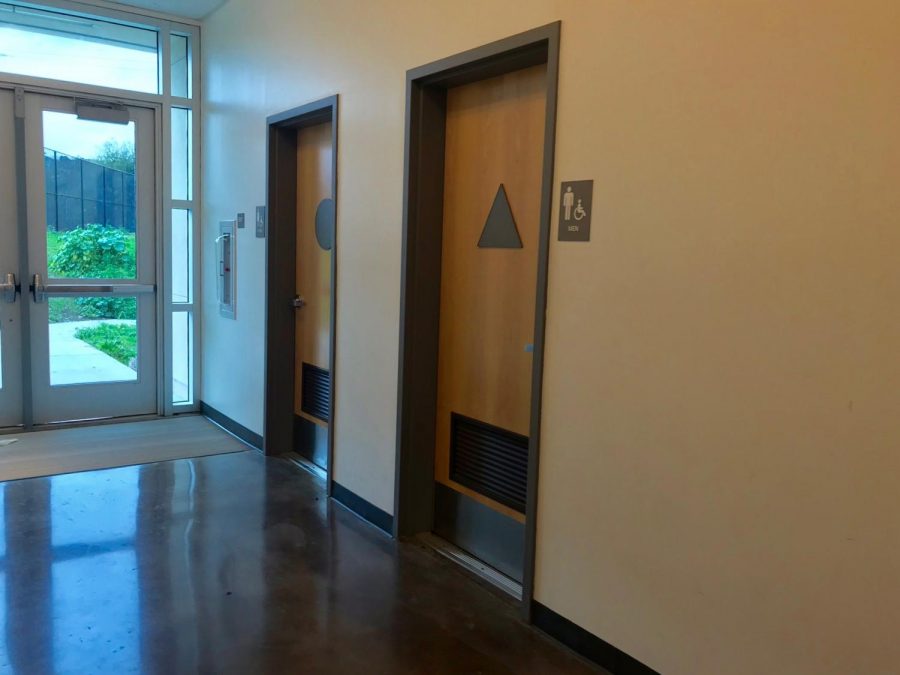 I-wing bathrooms have been reported closed over five times.

Students and staff reflect on effects of closing the I-wing bathrooms due to student behavior.

Imagine you’re in audio class working on music and making some beats when you realize you have to go to the bathroom. So, you raise your hand, get called on, get up, and go. It’s a nice short walk to the bathrooms in the beautiful new Digital Arts building, so you waste little time and approach the doors. You reach for the handle and pull, but it’s locked. You try one more time to be sure and ‘yep, it’s locked.’ So, you think for a second and wonder why they’re locked. You have a guess. Then you decide to walk to the second-closest bathrooms in the F-wing.

In numerous cases throughout the school year, the I-wing bathrooms have been locked, prohibiting Digital Arts students from using a nearby restroom.

“We lock bathrooms when we are concerned about behavior taking place in there,” Administrative Vice Principal, Charles Velschow, said.

When the I-wing bathrooms are locked, students have to walk to other bathrooms on campus. Cailin Wright, a junior and Audio student, has experienced the effects of these bathrooms being locked.

“It’s inconvenient, but it’s not a huge deal,” Wright explained. “Once, the girls’ bathroom was locked but the guys’ wasn’t, and that sucked, but other than that one time it’s really not a huge deal, just kind of annoying.”

Administration are aware of possible problems with the longer walk to the bathroom.

“I don’t blame students,” Velschow stated. “It’s a huge inconvenience for them, I mean, it’s a beautiful building over there. It would be great if we could say we’re going to have all the bathrooms open all the time.”

Other instances of students’ behavior in the campus bathrooms, though, have had much larger effects than a longer walk. According to Velschow, there have been three false fire alarms this year, two of which were set off by smoke detectors in or near the I-wing bathrooms and one of which was a school-wide drill.

“It’s a huge distraction when the whole school has to evacuate especially in the middle of a class out to the football field,” Velschow said. “I mean you’re now impacting academic learning time so the trade off is ‘okay, [now] you’ve got to walk an extra five minutes to go to the bathroom.’”

Some students from the Digital Arts building know the possibility of illegal substances being used in the vicinity. One student can even recount multiple events that lead directly to vaping, causing a fire alarm to go off.

A group of six or seven guys just walked out, and the whole hallway just started to cloud up, and we went to open the [outside] doors, and the fire alarm went off from the one [smoke detector] in the hallway.”

“We watched a big group of freshman and sophomores walk into the bathroom,” an anonymous student witness said. “We’re just sitting there like ‘oh my god.’ We were about to place money on who thinks they’re going to set off the fire alarm.”

The student witness confirms that the events they allege took place on the day the school experienced a fire alarm and had to evacuate to Bradley Field.

“A group of six or seven guys just walked out, and the whole hallway just started to cloud up, and we went to open the [outside] doors, and the fire alarm went off from the one [smoke detector] in the hallway,” the student recalled.

Some students have also reported fans being placed at the doors of both I-wing bathrooms. Velschow explains the necessity for this action.

“Once you have any smoke or anything like that in any room, the fire alarms are now so sensitive that it if you don’t clear out the smoke it could be set off again,” Velschow described.

Both administration and the vast majority of students are aware of the issue of vaping and other illegal drugs at Woodside, but this situation has existed for countless years.

Velschow explained how his high school had a smoking area called the “pit,” where students and teachers were free to take smoke breaks, which at the time involved cigarettes.

Teenage use of cigarettes is decreasing, though. This is supported by Centers for Disease Control and Prevention (CDC), which states that “Nearly eight of every 100 high school students (7.6%) reported in 2017 that they smoked cigarettes in the past 30 days—a decrease from 15.8% in 2011.”

Teens have been exposed to new substances since the rise of nicotine products such as JUUL and Suorin.

“It happens at every high school, in fact, not only in high schools but in any place now, you know there’s a lot of restrictions about smoking,” Velschow said. “These are now Tobacco-free Campuses, [because] the research behind second hand smoke and how that impacts people is pretty clear.”

Though there is a clear decrease in teenage use of cigarettes, CDC affirms that “Nearly 21 of every 100 high school students (20.8%) reported in 2018 that they used electronic cigarettes in the past 30 days—an increase from 1.5% in 2011.”

An anonymous student expands on how teens in schools increase access to devices and defy rules.

“It doesn’t matter what school you’re at; there is always going to be a group of kids who find a way to get stuff into that school,” the student said. “It’s all determination… the fact that they make a rule about it? Kids just get curious.”

Admin will continue to try to control what the federal officials are calling an “epidemic of youth use.”

“We always try to supervise bathrooms going in and out and checking them, but if you have a series of incidents that are inappropriate, we are going to close bathrooms until we feel like we can trust students and feel like they are going to behave themselves,” Velschow stated.