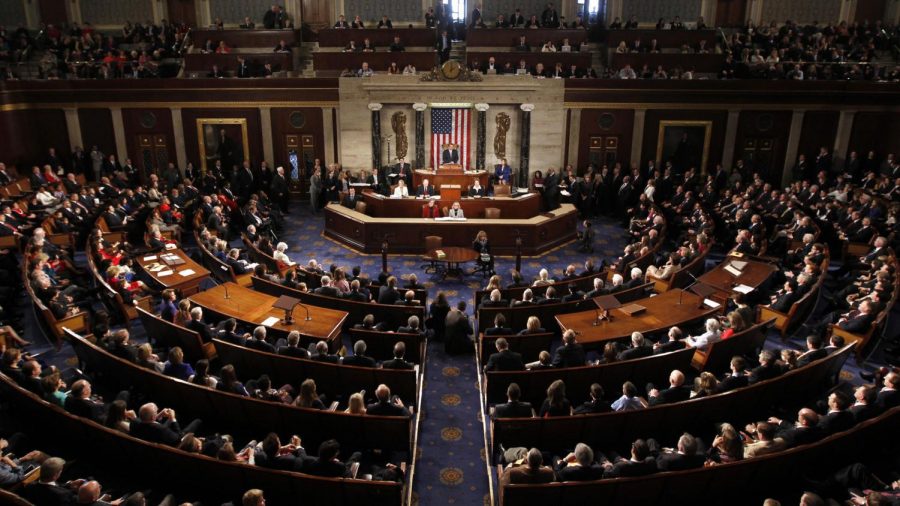 The United States House of Representatives

Democrats Hope to Pass New Policies After the Midterms

The Woodside Community and Rep. Anna Eshoo Have Policy Goals for the Next Legislative Session

According to many pollsters and election prediction databases, Democrats are likely to win control of the House of Representatives in November; hopes of taking the Senate are far more unlikely. Following two years of total Republican control of Congress, Congressional Democrats have many policy priorities they intend to focus on should they retake the House. Representative Anna Eshoo of Palo Alto told the Paw Print her top priorities for the next legislative session.

When asked about her top priorities for the next legislative session, she pointed out several areas of reform and action Congress could take. In 2013, the Supreme Court invalidated portions of the Voting Rights Act (VRA), creating loopholes that states could use to manipulate votes.

“The Voting Rights Act is one of the most important pieces of legislation that the Congress passed many years ago, and the Republicans have allowed the VRA to not be brought up to date,” she added. “Close that loophole. That will strengthen what i think has a sanctity to it, and that is voting rights of every individual.”

The last two particulars Rep. Eshoo brought up were gun violence and the family separation crisis at the border.

“The violence that’s taking place in our country because of the plethora of weapons used in war,” she began. “We don’t need that in civil society. We can address this; we do have bipartisan legislation, but the Speaker would never allow it to come to the floor for a vote… I really do think that the students from the high school in Florida have worked to take our country to a higher level of morality. Why? Because the adults have failed them.”

Rep. Eshoo emphasized the fact that several bipartisan bills in the House of Representatives that could potentially pass in a full floor vote have been blocked by the Speaker, Rep. Paul Ryan.

“Congress must reform our immigration system,” Rep. Eshoo said. “It was not that many years ago when the Senate voted on a bipartisan basis, and Senator McCain was in on it, they passed bipartisan immigration reform, but the Speaker of the House didn’t allow it in the house.”

She then went on to speak about the family separation crisis.

“We need to stop this policy of zero tolerance, which has really brought shame to the United States of America,” she detailed. “When you take children away from their parents, the administration is doing it in our name, your name, my name. I traveled to the border, to Texas, both to Mccallen and Port Isabel [child detention facilities], and I saw it myself, and it was chilling, heartbreaking, and immoral. It’s not the best of America at all. It’s shameful.”

The issues of gun violence and family separation resonated with several Woodside students and staff.

“There’s a lot of appalling things happening in America right now,” Lisa Prodromo, a Woodside English teacher, commented. “We cannot take children away from their parents. What kind of country are we that were going to do that?”

At Woodside, a reassuring theme among students and staff alike was a hope that the midterms will bring positive change for issues that continue to plague the country.

Sophomore Stephanie Alfadel added, “I believe gun violence is a huge problem in the United States. Congress needs to recognize the degree in which guns are used in violence, and take action based on that by creating gun control for which guns can be used and who can use them, and having background checks.”

Rep. Eshoo, a staunch opposer of many of President Trump’s policies -including on gun violence- said that impeaching the President was “not off the table,” but that Congress must look into Special Counsel Robert Mueller’s report to determine if impeachment is appropriate. She emphasized the importance of flipping Congress in November, citing the Republicans’ vapid oversight of the Trump presidency.

If the House and Senate remain in the present majority, then nothing will happen.”

“If the House and Senate remain in the present majority, then nothing will happen,” Eshoo said in a comment about her Republican Congressional peers. “And, no member of Congress works for the President regardless if they’re the same party, different party; in my view it’s a very sad thing because they’re not standing up and doing the work that needs to be done.”

Most stridently, Rep. Eshoo stressed the fact that these policy goals can only be achieved if people, and young people in particular, vote.

“Young people need to hold elected officials accountable for what they’ve done, what they haven’t done,” Eshoo insisted. “I believe that the midterm elections this year 2018 will be the most consequential elections in the history of our country. We have an opportunity to change the course of our country this November. Everyone needs to go out and vote.”