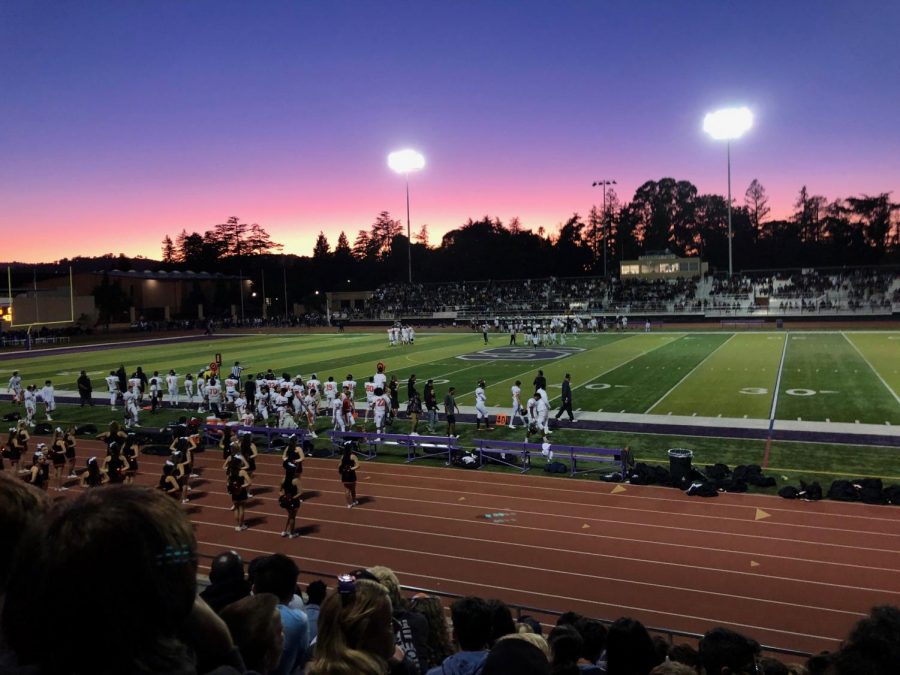 People in the crowd watched the sunset as the teams huddled to plan their next moves.

Woodside and Sequoia High School started off their 2019 football seasons with the most exhilarating game of the year. The two rival schools compete annually for “The Log,” a trophy the winning school gets to keep until the rematch. This year Sequoia won the game 40 to 20, winning the log, but Woodside students were still proud of their team.

“Everyone seemed pretty happy even though we weren’t doing well,” Dahlia Crane, a sophomore on dance team, explained.

Those who came out to cheer for the Wildcats remained supportive of their team even as they faced defeat.

“They did the best they could,” Caroline Taylor, a Woodside High School senior, said. “The only thing I think they could have improved on was their defense, but we did lose a lot of star players last year, so that could have played a role as well.”

“The game didn’t go as we hoped,” Mooney admitted. “We’re still adjusting to our new offense and our defense definitely needs some work, in particular the run defense.”

The results of the game also seemed to affect the demeanor of the crowd.

“I noticed the Woodside side was a lot quieter than last year,” Mooney stated. “I think it was because [the scores] weren’t as close, but it definitely was a lot less encouraging.”

The more subdued attitude could have been because Woodside students sat on the Sequoia side.

“I had friends sitting on the Sequoia side,” Taylor said. “So my Woodside friends and I sat with them for half the game. It was a lot more comfortable, because [Sequoia’s guest bleachers] are pretty run down and kind of small.”

Lisbeth Bryant, a Woodside High School senior, had a similar experience to Taylor.

“I stayed on the Sequoia side the whole game, and it was pretty great,” Bryant commented. “Everyone was yelling and having a lot of fun.”

Students are hopeful that future games will yield more enthusiasm and excitement.

“Maybe everyone was less enthusiastic because it was an away game,” Crane reasoned. “Hopefully the home games this season will be more exciting.”