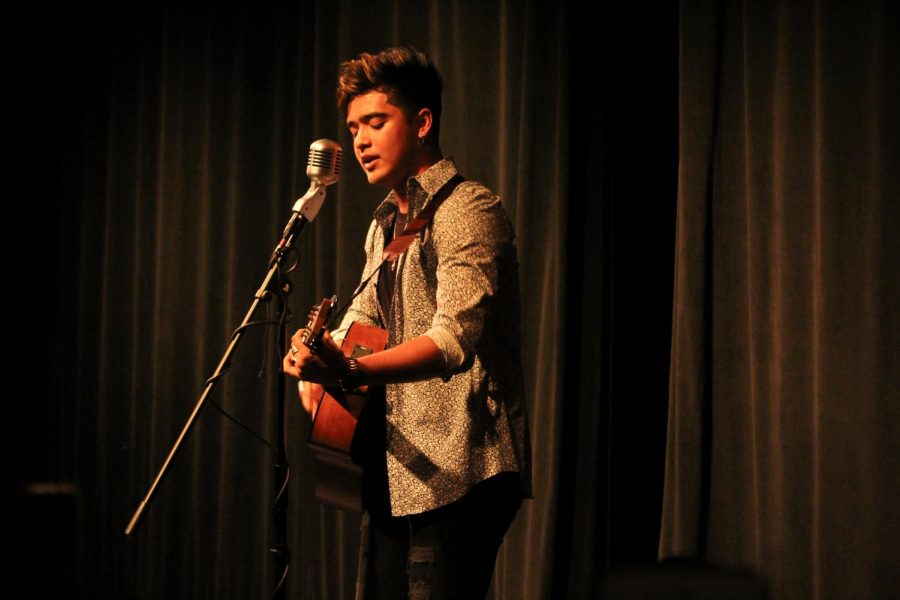 Although the Dragon Theatre only seats 65 people, about 80 fans came to his free performance, lining up as early as 5:30 p.m. with his set beginning at 7 p.m.  As fans filed into the theatre, Calderon’s family members thanked fans and accepted toys, which would later be donated to Saint Anthony’s church in Menlo Park.

“This is the church where [Sergio] first fell in love with music by playing different instruments and then singing in the choir with our uncle,” Yeni Jimenez, Calderon’s older sister, described.

Jaclyn Ramos became a fan of Calderon after he won Boy Band, the 2017 ABC show where five winners formed the band In Real Life and received a recording contract with Hollywood Records.

“[In Real Life] just make[s] us feel loved,” Ramos explained to the Paw Print before the show.  “My uncle knows Sergio personally, so when [Sergio] found out that [my friends and I] didn’t have VIP [to their concert], he came early in the morning just to meet us.  He gave me this hoodie and signed it for me… and he makes us feel like he really cares about us.”

During the show, Calderon sang six songs, along with a brief duet with his twin brother, Joseph “Joe” Calderon, by fan request.  He played both covers of popular songs as well as original songs by In Real Life.

Rather than following the format of a more formal performance, Calderon held conversations with members of the audience, joked with fans, and even held a short question and answer session.

“The band didn’t come to the Bay Area and do a headline show, so I wanted to come and do something special for our Bay Area fans,” Calderon elaborated in an exclusive interview with the Paw Print.

Ivan Reyes, who has known Calderon since elementary school, arranged the performance and introduced Calderon before he hit the stage.

“He just wanted to do something for his fans and the community,” Reyes said, “and I knew the Dragon Theatre was the perfect opportunity, since we want to show an array of talent here downtown.”

Despite pursuing soccer at Woodside Priory School, Calderon found his passion with music and eventually auditioned for Boy Band.  He commented on how his musical career has evolved in past years.

“It’s cool to see [the] growth.  I used to sing over there,” Calderon said, gesturing at the Century Redwood City Downtown movie theater, “and maybe two people would come by and stay for a minute, then leave, then two more people would come by.  Now, for me to just say, ‘hey, I’m performing downtown,’ and to have this many people to show up, it’s so sick. [I was] born and raised here, so it’s like everything is coming full circle.”

With 2019 approaching quickly, Calderon described what he’s looking forward to next year.

“After we won the show, we had the first couple months planned out,” Calderon said.  “But now, since we’ve been a band [for a while now], I think we can be ourselves more and be more involved in our new music, [especially] through social media and in interviews.”

Recalling his band’s performance at Woodside High School in March earlier this year, Calderon offered some advice for Woodside students.

“I know Woodside has a [lot of] activities, like studio, band, [and] clubs,” Calderon noted, “and people shouldn’t be afraid to try new things.  I would tell [students] to try all the activities, because you can’t really do the anywhere else. I’m only just getting to them now, and I’m like, ‘Dang, I wish I had done that in high school.’ So, try everything!”

After his show ended a little after 8 p.m., Calderon personally took time to take photos, sign posters, and talk with his fans.  Carina Villalobos, a Las Vegas resident, travelled a total of nine hours to see Calderon perform.

“He’s amazing,” Villalobos said after the show, waiting in line to meet Calderon with friends.  “I’ve been supporting him since Boy Band, and I can’t wait to see what else is in store for them.”