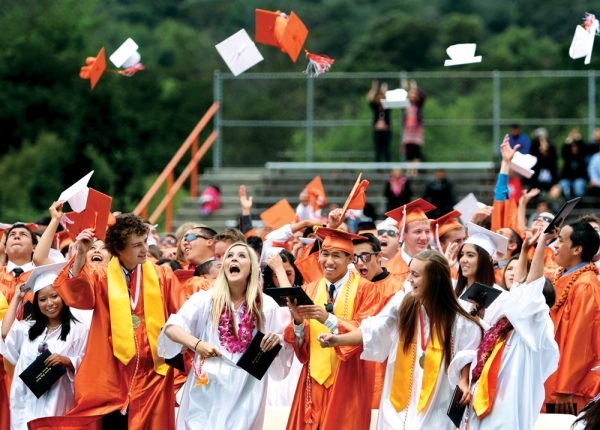 Just before Woodside’s Gender and Sexuality Alliance (GSA) meeting, Woodside senior Zeejai Leonard borrows a bathroom key from English teacher Tony Mueller. Students who want to use a gender-neutral bathroom have to get a key to unlock it from a teacher and walk to one of the few staff bathrooms available for students of all gender identities to use. Going out of the way to find a gender-neutral bathroom is an experience that many of the members of the GSA are familiar with, and gender politics and issues of identity can be tough to navigate at Woodside.

Like bathrooms at Woodside, graduation robes present tough situations for gender-queer students. Every year, girls in white robes and boys in orange ones walk up to the stage on Bradley Field to receive their diploma. However, separating gender by white and orange causes unintended results for genderqueer students. As Woodside seniors continue ordering their graduation robes, students in the GSA are currently lobbying for a end to gendered colors.

Leonard, who is president of the GSA, is spearheading the effort to discontinue such traditions.

“Our current issue is while we still technically have the choice, and anyone can choose orange or white… it still sets up those expectations and stereotypes,” Leonard explained.

For many students at Woodside who may be gender-neutral, gender-nonconforming, or transgender, whether out of the closet or not, this can be an upsetting, uncomfortable experience.

“A lot of the genderqueer community has a lot of issues with that,” Leonard continued. “There are trans and genderfluid people, and nonbinary or gender-nonconforming people that have to make that decision whether to wear orange or white…  It creates a lot of stress and anxiety for these people, which I think is unfair and unnecessary.”

Safety and privacy are also issues that need to be considered.

“It can be a risk of safety because students might not be out to their families, especially their extended families,” Leonard stated. “All of these people have expectations and could form unsafe environments at home.”

Others at the GSA meeting voiced their concerns as well. Many didn’t want to have to commit to either orange or white, knowing their choice would make people see them as a girl or boy, or open them up to harassment based on the gender “traditionally” assigned to each color.

Students have the option to choose which color they want, but the choice still doesn’t work for some.

As Leonard put it, “it’s not much of a choice.” Ultimately, many didn’t want to be seen as wearing “boy robes” or “girl robes.”

Jet Thipphawong, a junior at Woodside, explained a situation from last year’s graduation where the robes caused conflict. A student was forced to wear white in order to avoid outting themself as nonbinary, causing them to be misgendered. For some students, expressing the gender they identify with at school could endanger them or introduce them to harassment or verbal abuse from transphobic or homophobic parents. Leonard has an agenda for shifting away from gender-based robes.

“There’s three things we’re trying to go for: the first part that we’re trying to go for at the very least is getting rid of the part that says what tradition dictates,” Leonard explained. “Our second, and I think a little more ideal, proposal would be to assign each person [a color] by alphabetical order or last name… so you still have an even amount of white and orange. This way, it’s not gender-based. We’re hoping to schedule a meeting… with Ms. With.”

Leonard met with Ms. With on Monday, December 3rd.

Danny Whiting, a senior at Woodside, also disagrees with the practice.

“While the fact that Woodside [students have] the option to choose whichever colors for graduation gowns is wonderful, it still doesn’t solve the whole problem,” Whiting said. “The fact that there is a segregation of males and females by color is the main problem. It makes it hard for those who are insecure, questioning, or neither a girl or boy to choose a color for their gown. They are forced to choose a color that categorizes them as one gender or the other.”

Safety was an issue for Whiting as well.

“Also, there are closeted trans students who might not be able to come out to their family for their safety, who then have to wear a color that doesn’t match their gender,” Whiting noted. “Overall, making students wear gendered gowns can cause gender dysphoria in students that don’t adhere to cisgender or heterosexual gender standards.”

The issue of gender identity is tricky, and many are unsure exactly how they identify, but know they aren’t straight or cisgender (identifying with their birth gender).

“I’ve struggled a lot, and I’ve just settled on gender-nonconforming, so choosing white or orange portrays me as something that I’m not,” Leonard added. “It doesn’t particularly bother me anymore as much as it used to, but it’s still uncomfortable to be misgendered.”

“Right now, I’ve chosen orange just because that just looks better on me than white, but I know most people are not going to see my decision as that,” Leonard continued. “It makes me anxious. I actually didn’t know that the robes were gendered when I was a freshman, or I guess I never really thought about it when I was a freshman. When I found out, it stressed me out a lot, because I knew people would have all these expectations, and there was a lot of inconsistency of who I was out to and who I wasn’t out to. That’s still the case, but it doesn’t bother me as much now.”

This is a problem that not many cisgender students and teachers are aware of.

“It’s not something I’ve given much thought to,” Lisa Prodromo, an English teacher at Woodside, commented. “That’s just another example of how some of us are unaware of our privilege. I wouldn’t have considered that.”

“I’d usually just be like, I’m glad I’m a girl because those orange robes are really ugly,” Prodromo continued. “However, the bottom line is that for some students, if you identify as gender neutral, what are they going to do? Have a light orange robe for you? No, you have to make that call that you have to identify as one gender or the other. And that’s not fair. We’re not always aware of the privilege we have.”

Leonard is hopeful for graduations in years ahead.

“I think the administration will be receptive to our ideas,” Leonard stated. “Woodside has strived to present itself as a progressive and inclusive community.”