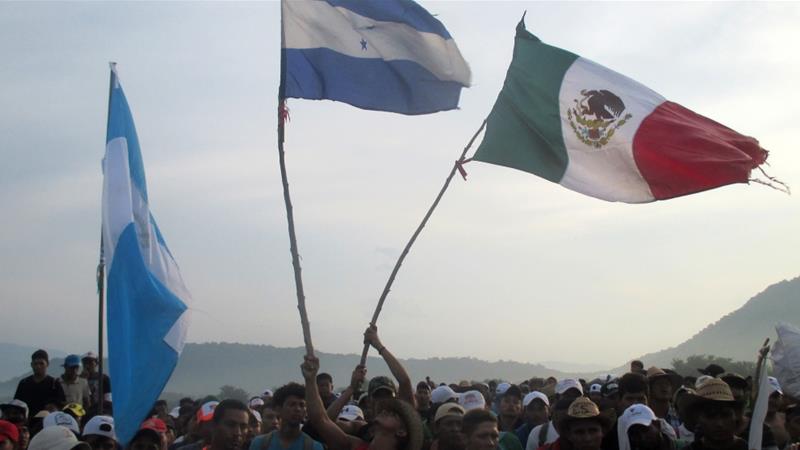 Thousands of South American immigrants are making their way to the southern border of the United States in three massive caravans, leaving Woodside students to consider the greater significance of the event.

The first of the three caravans set out on October 12, 2018 from San Pedro Sula, Honduras, which has been dubbed the ‘murder capital’ of the world. The caravan was initially 160 strong, but as the days went on, it grew to amass an estimated 1600 refugees escaping the tyranny of their home countries. The second caravan left from El Salvador and currently remains in its formative stages. The third, which also comes from Honduras, has grown to 2,000 people and is expected to reach Guatemala City by October 31.

These groups have received much criticism from U.S. Republicans, who claim that the caravan is in cahoots with the Democratic Party (which denied these claims).  Some who live in the United States and are currently awaiting citizenship empathize with the migrants.

One of these people, who wished to remain anonymous, reported on the experience. “It is like a harsh punishment, to feel your illegal presence in the country,” the anonymous source explained. “When looking for work, [there’s] the fear of being caught driving without a license. [It’s] a constant mental wasting [from] anti-immigrant groups and emotional wear thinking of facing the law sometimes.”

The anonymous source, a mother, has a family that has lived in the United States for many years now. She knows firsthand the pain and danger of coming to the United States illegally, and she says no one would attempt the journey if they didn’t face far greater danger in their homeland.

The migrants are facing staunch aggression from many powerful political leaders, including President Trump, who stated in an October 25 tweet, “To those in the Caravan, turnaround, we are not letting people into the United States illegally. Go back to your Country and if you want, apply for citizenship like millions of others are doing!”

Rather than apply for citizenship, those in the caravan plan to apply for asylum. According to legal processes, the migrants will wait up to 45 days in the United States to get an asylum trial and then 180 more to hear the verdict.

“We are known as the land of opportunity, and things that we have and certain rights that we experience are denied to thousands around the entire world,” Callie Shypertt, a history teacher at Woodside High School, reported to the Paw Print. “We have access to education that is publicly funded K through 12. We have access to not only health care to get a higher standard of life but a better quality of life.”

According to state department data gathered by the website Global Citizen, there has been a 65.8 percent drop in refugees in 2018 from the first three months of 2016. The United States are on track to welcome the lowest number of immigrants on reord, a troubling statistic to many.

The caravan, which is set to arrive in the United States this December, continues. Woodside staff are not the only ones to worry for the future of the immigrants.

“I feel like immigration isn’t the problem, but the way we treat them,” added Lauren Hodgson, a junior at Woodside. “They are not bad people; they are just moving from one country to the next. I feel like we should treat them kinder; they are still human beings, they are still people. And, I don’t think that sending armed forces to keep people out is an appropriate way to do that.”