The Unpopularity of the Gap Year 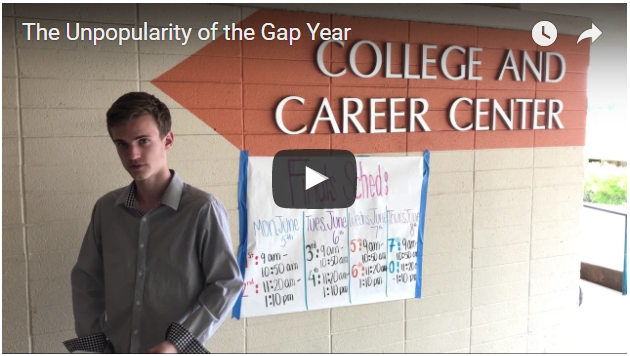 It might be nice for some to have a year off after an eventful and somewhat tiresome four years of what would potentially be a very large step in life. However, for others, the idea of such a break could be a burden as some might see it as a waste of time and would prefer to jump on the college train as soon as possible.

Of the several students surveyed, not one chose to take a year off before college.

“One of them is going to live in France for a year and the other is going to use the year to prepare for the military, but I don’t know anyone that personally goes here that is choosing to do a gap year.” – said Frank Steglinski a senior that plans on attending Foothill and transferring to a 4-year college afterwards.

According to AmericanGapYear.org, the amount of students choosing a gap year has risen 294 percent since 2010. However this doesn’t seem to apply to the Woodside community or the Bay Area as so few students seem to be indecisive about their college choice or their career after high school.

“I know one person and she isn’t here right now.” said senior, Caroline Laubshire who plans on attending UC San Diego to pursue a career within theatre.

Students always know that one person choosing to make the decision, and appears to be a very relaxing time for some people but a very boring time for others.

“I took a gap year last year, it was nice but I forgot a lot of what I learned in high school” said Mitchell Martin, who graduated Woodside in the class of 2015.

The year off is an unpopular choice for most as it could potentially make them forget what they had learned in high school but it is a very relaxing choice for those that want to take vacations and travel or focus on their jobs.