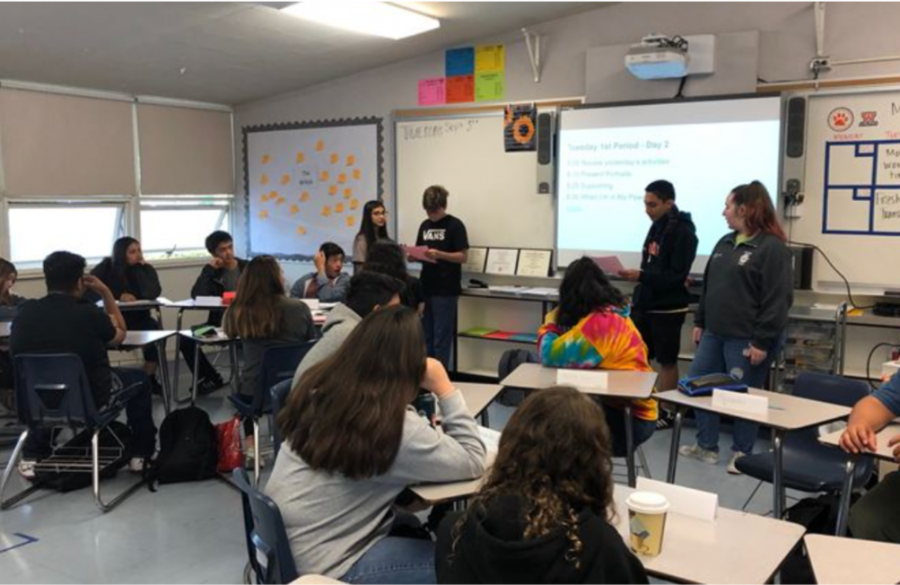 Freshman Transition, in which upper classmen present to WHS freshmen, made several changes to suit the challenges of 2020.

Freshman Transition, the program created to introduce freshmen to the Woodside community and its social-emotional health resources, ended this year’s lessons on February 2.

A branch of Woodside’s Students Offering Support (SOS) group, Freshman Transition is a program that “focuses on building a welcoming, safe and caring community by teaming each 9th grader with an upper-class Peer Leader.” However, with this year’s shift to a digital format, building a sense of community was more difficult for those involved in the teaching process.

“It’s hard to engage students who might not have their cameras on or are constantly on mute and not responding,” explained Elaine Dessus, Woodside’s Mental Health Support Specialist and SOS Coordinator. “I think the benefit of Freshmen Transition is hearing what other people have to say… But if not everybody is participating, then we miss those opportunities to hear another opinion or to hear some of the experiences that we all bring to the table.”

For Peer Leaders, the participation of students is a main factor in how well lessons go.

“I had a great time,” said senior and three-time Peer Leader Gabby Melamed. “I know it’s sometimes hard for people to talk over Zoom, but I feel like our group was great, and whenever I asked something, people answered me and spoke, and people tried to show their faces as best as possible if they were able to.”

“We did include some videos that were related to the topics,” Dessus said. “We had breakout rooms that offer that more intimate setting to replicate the smaller groups that we had in person. In addition to that, I encouraged the peer leaders to always kind of start off with an icebreaker so that it wasn’t just jumping into a serious topic or a serious conversation; it was [about] really trying to get to know the group.”

Senior Ethan Lau, this year’s Board of Student Affairs President, is one of the Chief Leaders of Freshman Transition, responsible for coaching Peer Leaders and designing curriculum. After the resurgence of Black Lives Matter protests in 2020, Chief Leaders chose to include a new lesson on implicit bias and racism.

“It was mostly designed by the Black Student Union, which is a club here at Woodside,” Lau said, discussing the new lesson. “They did a very good job, and we didn’t have much to change.”

Freshman Transition curriculum also changes based on feedback from freshmen at the end of the course. This year, over 300 responses came in over the Google Form used for comments.

“The feedback was really overwhelmingly positive,” Dessus shared. “But there were some things that were brought to our attention. Like some of the topics were uncomfortable… but, you know, I don’t want to shy away from having such important conversations because these are life skills that we want students to have.”

The program covers many topics that deal with heavier subjects, such as the impacts of stereotypes, toxic versus healthy relationships, and identities. The curriculum aims to allow freshmen to make decisions and treat each other with the respect and insight that the Woodside community hopes to build.

“We’re the only school that has Freshman Transition in the entire district,” Lau stated. “It’s something that’s unique, and I hope that we keep carrying on… our responsibility to welcome new students to our larger, extended family that’s Woodside Wildcats.”

While Peer Leaders teach freshmen the course’s curriculum, they’re also encouraged to build a connection with their students.

“I think that’s probably one of the biggest reasons I did it, just for the freshmen to know that they have support and people they can talk to about high school,” Melamed said.

“I would love people to join, even though I won’t be there next year, but it’s a really amazing program to be a part of,” Melamed said.