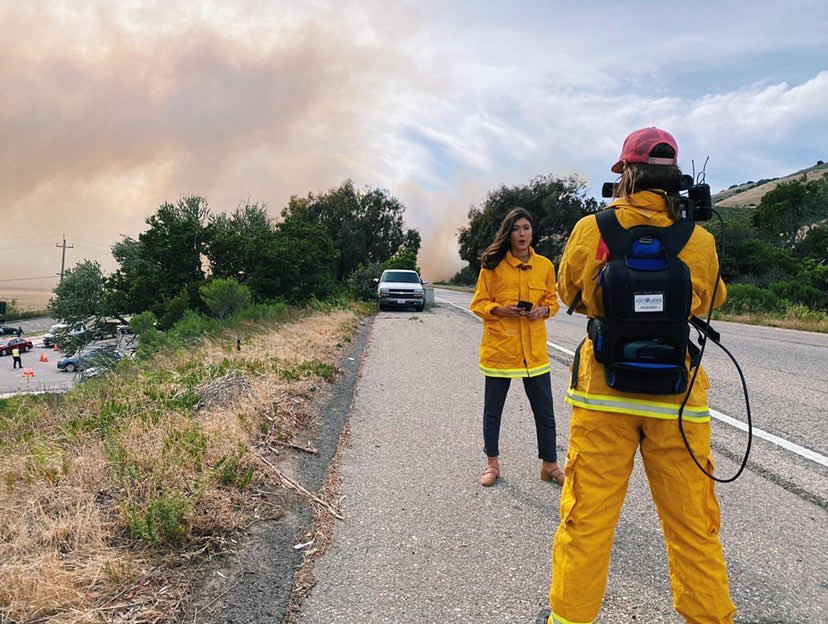 Woodside High School alumna Megan Healy brings her passion for relaying the news to life as a weekend anchor and Multimedia Journalist (MMJ) at KSBY News.

Megan graduated from Woodside High School in 2014 and then attended Cal Poly in San Luis Obispo, where she worked towards a bachelors degree in journalism and a minor in Spanish. While at Cal Poly, Megan pursued several internships that related to broadcast journalism, and she worked for Cal Poly’s Mustang News and Mustang Gameday. While Megan’s hard work and determination are the ultimate reasons for her success, her time at Woodside High School arguably played a significant role in getting her where she is today.

“When I had graduated from Woodside, there were a lot of different things that interested me,” Healy expressed. “I was very involved in leadership and public speaking. I was also super involved in drama and doing the musicals; so I loved both aspects of [public speaking and acting] and wanted to combine them somehow.”

With combining her two passions of public speaking and acting in mind, Healy searched for a career path that would bring both her passions together.

“Journalism came to me senior year when I was looking at a lot of the [college] programs,” Healy revealed. “It interested me because I like telling people stories, and I like being creative and challenged in those types of ways.”

During her time at Woodside, Healy was an active participant in leadership classes, musicals, and plays. These interests helped her become exceptional in public speaking, and she gained many other necessary skills for excelling in the broadcast journalism industry.

“In leadership, we did a lot of public speaking and a lot of organizational time management skills,” Healy explained. “You really need to have good time management [for] working on a deadline every day, so leadership really helped me with that. I did drama as an extracurricular, and Mr. Woodruff [emphasized] public speaking and being able to perform in front of crowds. I know that I don’t do that on a stage every day, but I do have a platform, which is one and the same.”

Mr. Woodruff, the drama teacher at Woodside, was thrilled to hear about Megan’s success and said that “Megan was a real bright spot in our theatre program; [she was] the kind of student you never forget.”

In addition to these electives, Megan also felt as though being proficient in English was a very important trait to have when following her career path.

“Being able to excel in […] AP English and mastering the language is something that really helped me improve my writing,” Healy disclosed.
After high school, Healy went off to attend college at Cal Poly, San Luis Obispo. During her time at Cal Poly, she was involved in their sports, and she participated in Mustang Gameday, which helped prepare her for her current role as a reporter.

“We set up a live hour broadcast before football, baseball, and basketball games,” Healy explained. “We would interview coaches, we would do player specials, and we would talk about the previous games and their standings. This definitely helped me build my on-camera presence and also helped me figure out how to write material and gather news and stories.”

As with most jobs, Healy soon discovered that the broadcast journalism industry was not at all as she expected, in fact, it turned out to be quite the opposite.

“I thought it was going to be glamorous, and let me tell you, it is not glamorous,” Healy revealed. “It is a lot of hard work, [and it is] so stressful. It’s challenging because no matter what you do, someone somewhere will not be impressed, and they will not be satisfied with the work that you do. You are constantly working on a deadline, and you have to make that happen. I thought it was going to be so easy; I’ll just go out, I’ll do my makeup, I’ll look good, and then I’ll go on air, and it is absolutely not that. Maybe ten percent of what I do is on air, the [other] 90 percent of it is finding story ideas, pitching them, setting up the interviews, shooting interviews, and getting footage.”

Unlike most jobs, however, Healy’s job gives her the opportunity to have an extensive platform. With that comes great responsibility and pressure to provide people with accurate and timely news. Also, having a platform allows her to share other peoples’ stories with a greater audience.

“I love that I get to be the voice for people!” Healy exclaimed. “I feel like it is very important in my role, especially now, to be extremely fair and unbiased. Going the extra length to talk to both sides and to present things in a fair and accurate manner [is something] I really strive to do. I feel really honored that people will talk to me and share some of their experiences that ultimately impact other people.”

If anyone is interested in pursuing a career in Broadcast Journalism, Megan Healy would love to answer any questions and can be contacted through direct messages on Instagram and Twitter.