How Women Still Matter in This Race 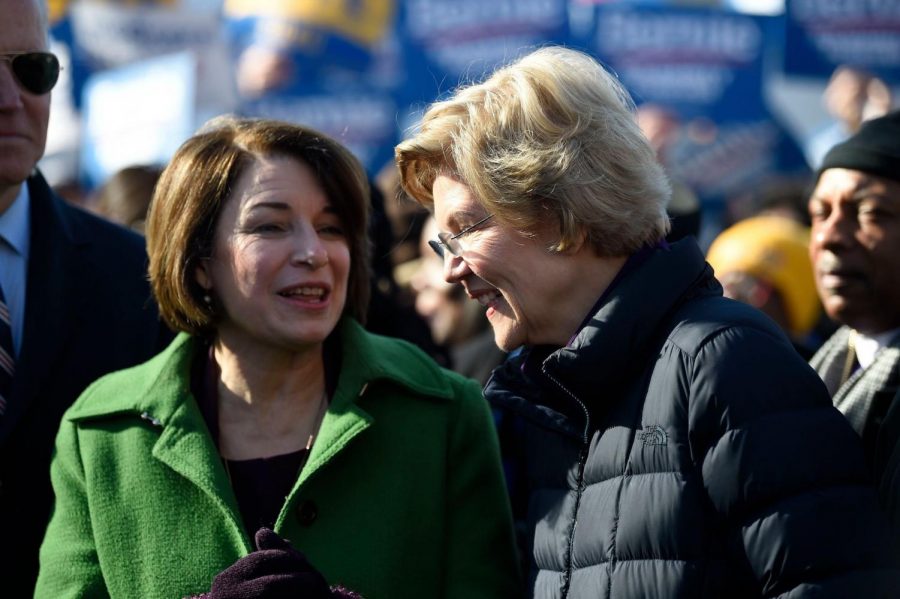 As the Democratic race narrows down to two competitors (former vice president Joe Biden and senator Bernie Sanders), many have begun to make predictions about who they will choose as their running mates. Many also predict that America’s next Democratic vice presidential candidate will be a woman, leading us to ask, “What role will women continue to play in this race?” In honor of Women’s History Month, the Paw Print asked female voters at Woodside about their predictions for vice president and their feelings about the current role of women in this race.

Woodside senior Stephanie Gerson predicted that Biden, who promised to pick a female running mate during a debate on CNN, would choose someone like senator Amy Klobuchar, a Democrat who recently dropped out of the race and endorsed him.

Gerson expects that if Sanders were to win the nomination, he would pick someone with more progressive views, like former presidential candidate Elizabeth Warren.

“Personally, I really liked Elizabeth Warren, and I feel like her values align more with Bernie Sanders because they’re both pretty liberal,” said Gerson. “I wouldn’t say that Warren is socialist, but she does share some of the same goals as Bernie.”

Caroline Daniher, also a Woodside senior, wasn’t sure if Bernie was able to stay ahead of Warren because of gender or because of the appeals of their respective policies.

“I think that [Warren] just didn’t appeal to enough people in the Democratic population, primarily because she has very far-left policies,” said Daniher. “For some reason, she and Bernie Sanders have similar viewpoints, but people just hung by Bernie Sanders.”

Daniher felt it was upsetting that there are no female candidates left in the race.

“I think it’s disappointing because I believe there needs to be more [female] representation in the Oval Office and the executive branch in general,” said Daniher. “I hope in the future that more women will be encouraged to run.”

Gerson was also disappointed that it is still so difficult for women to win the nomination and the presidency, and she thinks that some of the hesitations from voters in this election cycle stem from concerns over the 2016 presidential election.

“I think people are afraid that there will be the same outcome that happened in the 2016 election, where Hillary [Clinton] lost to [Donald] Trump… They don’t want that to happen again because people don’t want Trump for another four years,” said Gerson. “They’re saying that they’re not ready for a female president, but how can we be ready for a female president if we don’t give them a try?”

Shortly after dropping out following an unfortunate performance on Super Tuesday, Warren spoke about the struggles of running in our nation’s biggest race as a woman.

“One of the hardest parts of this is all those pinky promises, and all those little girls who are going to have to wait four more years,” said Warren. “That’s going to be hard.”

Warren used to share “pinky promises” with young girls on the campaign trail, explaining to them that she was running for president “because that’s what girls do.”

Many women, even those who did not consider themselves to be Warren supporters, felt unhappy after there were no female candidates left in the race. Though it will not be the same as a female presidency, many female voters are still excited about the strong possibility of a female vice president.

Woodside senior Samantha Iliana is one of them.

“I would be happy [to have a female vice president] because I think it would be good to show that we’re able to trust a female who has power and give a woman more power,” said Iliana. “I feel like that’s something we’ve been working for but haven’t quite gotten to.”

Gerson also supports the idea of a female nominee.

“I do think it would be refreshing to have a female vice president, but I was really hoping for Warren or Klobuchar to win the race, so I’m pretty disappointed by that.” said Gerson. “I guess we’ll just have to hope that we’ll have a female democratic candidate in the next election.”