Biden gains traction in the March 10 and March 17 state primaries. 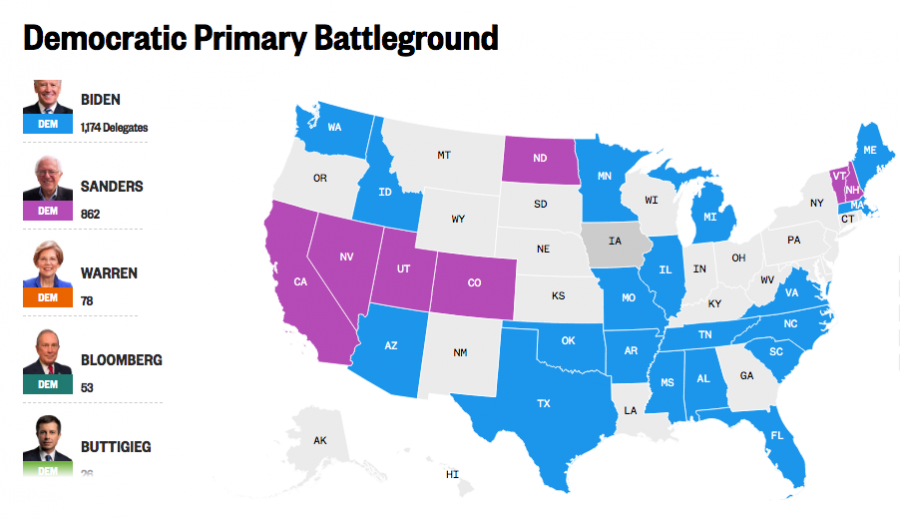 Joe Biden and Bernie Sanders continue the delegate race with 1,991 delegates needed to win the nomination.

With the presidential race down to just two candidates, Joe Biden has taken an overwhelming lead with 1,180 delegates while Bernie Sanders trails with 885. In the March 10 primaries, Biden swept, winning five of the six states. On Tuesday, March 17, Biden had another successful night of wins in Arizona, Florida, and Illinois.

Many Woodside students who will be eligible to vote for the presidential election this fall are staying up to date on the primaries and upcoming nomination.

“I predict Joe Biden to come close to running the table in the primaries going forward,” senior Gavin Carlson said. “Obviously he won’t win every state due to the large base Bernie Sanders created for the past several months, but it’s starting to become a one-man race, and it’s clear Democrats are beginning to understand Biden is the most inclusive Democratic candidate.”

Part of Biden’s campaign aims to gain the support of minorities and middle-class families. One of his campaign quotes reads: “To all those who have been knocked down, counted out, left behind—this is your campaign.”

Members of the Sanders campaign were hopeful going into the March 10 primaries, but without the caucus system in place in Washington and Idaho, his chances were not as high. According to New York Times reporter Nate Cohn, caucus format “tends to favor [Sanders].”

After the outcomes of the March 10 and March 17 primaries, it is apparent Biden has a strong lead; he only needs 811 delegates to win the nomination.

“Given the current trend as of now, I believe Joe Biden will most likely win,” said senior Caroline Daniher. “He has more delegates and seems to be taking the lead.”

Several states have rescheduled their primaries or caucuses due to the growing spread of COVID-19. So far, Connecticut, Delaware, Georgia, Indiana, Kentucky, Louisiana, Maryland, Ohio, Puerto Rico, and Rhode Island have all postponed their primaries.

After many candidates dropped out of the election just before or after Super Tuesday, many voters made last-minute decisions or cast their ballots for candidates who later dropped.

“I decided about two days before the California primary to vote for Biden because I felt he was the best candidate to run against Donald Trump,” Carlson said. “While I certainly spent basically all of February switching between candidates, it eventually became clear it was a two-man race with Joe and Bernie, and I personally aligned better with Biden’s policies on foreign policy, gun control, and his stance on beating Trump.”

With the changing circumstances for primary elections given many quarantines and social distancing orders, and with several regions of the United States in a declared “State of Emergency,” the future and rescheduling of the Democratic primaries have yet to be determined.