Woodside Students Give Their Options on the Presidential Candidates

An anonymous poll of 119 Woodside students reveals the varying political views and candidate support of the student body. 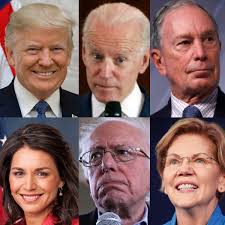 With American primary elections underway, Woodside High School students voiced their opinions about the candidates they support in an online survey conducted the week of February 24.

So far, four states (Iowa, New Hampshire, Nevada, and South Carolina) have voted in the American primary elections. The Super Tuesday primaries (occurring on March 3) will reveal the nominee choices for the delegates from 14 of the remaining 46 states. With two primaries and two caucuses already completed, the candidates with delegates in order from highest to lowest delegate count are as follows: Bernie Sanders (60), Joe Biden (54), Pete Buttigieg (26), Elizabeth Warren (8), and Amy Klobuchar (7).

In an anonymous poll of 119 Woodside High School students, 22.7% of students said that they would (or will) vote for the current front runner of the democratic party, Bernie Sanders.

“I think [Sanders] has great policies,” said an anonymous student from the Woodside poll. “His medicare for all plan covers the most people and goes into effect the quickest, he has promised to pass the Green New Deal, and his focus on helping the working class by taking on the 1% is pretty inspiring.”

Other popular topics that came up in students’ responses were climate change, women’s rights, the economy, and representation.

“[Sanders] is a champion of equal rights and equal opportunity, and his stance on these issues has remained strong and consistent for the last five decades,” said a student who supported Sanders in the poll. “I strongly support his agenda items of ‘Medicare for all,’ a $15 minimum wage, and tuition-free public college.”

“Pete Buttigieg has good policies about gun control, like expanding background checks,” said an anonymous student. “And he wants to work for more equal rights opportunities and tackling climate change.”

“My mom really likes him and I tend to agree with my mom a lot,” wrote one anonymous student. “Also he’s gay which is like YYYYYYYAAAAAASSSS QWEEEENNN.”

Third in the poll with 12.6% of the votes was Elizabeth Warren. Several students mentioned their wishes for a female president and aligning views on human rights.

“She has verbally committed to allocating around 600 million dollars to fund public education in America,” said a supporter of Warren. “She would also be the first woman ever elected.”

“Joe Biden is the candidate with the most experience and gravitas to beat Donald Trump,” said a Biden supporter. “He has shown time and time again that his leadership skills are far greater than that of Trump, both during his time in the Senate and as Vice President.”

Donald Trump had the support of 10.1% of the students who took the poll. Students mentioned the stock market and positive economy as reasons for supporting Trump, as well as his pro-life views.

“Donald Trump is reducing the size of government, cutting taxes, and reducing regulations. He has created the best economy we have seen in decades with free-market policies,” said one student. “He is also by far the toughest and best candidate in the race on illegal immigration.”

62.2% of those polled said they were Democrats, 17.5% said they had no party affiliation, and 9.2% said they were Republican. The remaining 11.1% of responses included answers such as Green Party, Libertarian, centrist, and “not sure.”

When centrist and moderate students discussed their opinions on the primary election, many mentioned both Buttigieg and Biden as potentially unifying candidates.

“[Biden] represents the moderate/centrist wing of the Democratic Party which is crucial to helping fix the issue of lack of unity in our country,” wrote one anonymous moderate student.

Many students expressed their emotional reactions to the state of the American political scene.

“I am frustrated that both parties have been on an aggressive move towards extremes, which makes people, who like me don’t believe in the party system employed by our government, feel isolated from American politics, and encourages mindless following rather than encouraging, rational debate.”

Just a few days before Super Tuesday, Buttigieg and Klobuchar dropped out of the presidential race. Both candidates then endorsed Joe Biden at a rally on March 2.

“We launched our campaign because Americans are hungry for a new kind of politics that brings us together,” Buttigieg wrote in his caption for an instagram post commenting on the end of his campaign. ” And together we’ll beat this president and build the era that must come next.”

Results for the eastern Super Tuesday states will begin release at about 4:15 Pacific Time. To pre-register or register to vote, go to https://registertovote.ca.gov/.