The Senate acquitted President Trump of the two impeachment charges against him on Wednesday, February 5. 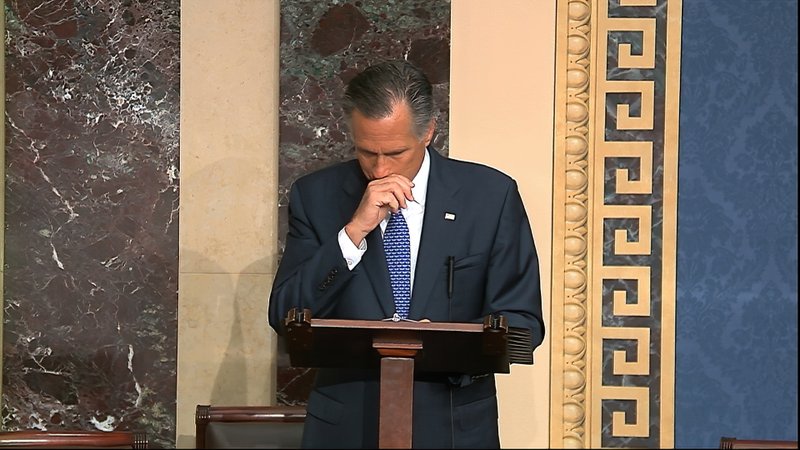 The Senate acquitted President Donald J. Trump of the two impeachment charges against him on Wednesday, February 5, 2020.

The first article, abuse of power, was rejected 48 to 52. The second article, obstruction of justice, was rejected 47 to 53. This Senate decision allows Trump to remain in office. Republican senator Mitt Romney of Utah was the only senator to break from his party and vote to convict Trump of abuse of power.

In a speech two hours after Trump was absolved, Romney explained his religious commitment to his oath as an impartial senator.

“I am profoundly religious. My faith is at the heart of who I am,” stated Romney.

Romney has already begun to face some backlash from his historical vote. Trump’s White House Secretary, Stephanie Grisham, released a statement after the Senate decision, stating that “only the President’s political opponents – all Democrats, and one failed Republican presidential candidate – voted for the manufactured impeachment articles.”

“I have great respect for the courage he showed,” said Representative Adam Schiff of California, who ran the House impeachment investigation.

Woodside senior Stephanie Gerson voiced support for senators like Romney who occasionally break from their parties on significant issues.

“I think it’s very brave for senators to go against their parties, especially for issues that are as important as impeachment,” said Gerson. “They face a lot of peer pressure from the other members of their party, but on some issues, I think it’s okay to go against your party if you really believe in something.”

“I think that [senators] should vote however they see fit, and they should base those votes on how they view what’s going on and staying true to their oath of office, honoring the Constitution,” said Shypertt. “So even if [a vote] goes against the party, as long as [Romney] is staying true to his core values and the ideals of America, [he should] go for it.”

Woodside senior and BOSA president Adrienne Evans felt that Romney’s decision reflects a more bipartisan side to our government.

“I think it’s indicative of the fact that there are some people out there, or at least some people in Washington, who have morals and are willing to make the decision that is fundamentally right instead of just going along with their party members because it’s easier,” said Evans.

Evans disagreed with the Senate’s decision to acquit Trump, particularly due to her concerns about election security.

“The whole point of an election is to try to capture the will of the people,” said Evans. “If that didn’t matter, if the will of the people wasn’t involved, we wouldn’t have elected officials, to begin with; there would just be dictators or monarchs. As BOSA president, I have some exposure to the process, and I think it’s important that elections are run fairly.”

Woodside senior Rebecca Rodriguez also felt Trump should have been convicted and was concerned about the fairness of the trials.

“I think part of why I see the whole process as unfair in his case was that it was very glossed over,” said Rodriguez. “It was rushed through, there were no witnesses called, and because of the elections coming up so soon in 2020, I think the Republicans just pushed for waiting it out … which led to an unfair trial that worked in Trump’s way.”

This decision concludes the third presidential impeachment trial in history. Andrew Johnson and Bill Clinton have also been formally impeached by Congress; both were acquitted. Richard Nixon resigned before he could be impeached. When asked if impeachment trials are still significant in modern times, Gerson agreed that they are but also questioned the fairness of such trials.

Shypertt also felt that the impeachment trials are still necessary in modern times.

“I think [the impeachment process] still is important because you have to be able to put a check on power, and nobody is above power, including the president,” said Shypertt. “And without it, I feel like there’s a lot more opportunity for corruption, abuse of power, and things that we take very seriously as a nation, [which] was built upon the idea of democracy, and impeachment symbolizes what it represents.”

Shypertt taught her American Government class, made up entirely of Woodside seniors, about the impeachment process in order to help them form their own opinions and prepare to vote in the upcoming election.

Shypertt believes that the true impeachment decision is now left to American citizens.

“I think it’s important that the American public and the people… be the judges for themselves,” said Shypertt. “You can cast your vote in the election in 2020, and you are the ultimate [one] in favor or against impeachment.”