An Introduction to the Woodside High School Student Body Constitution 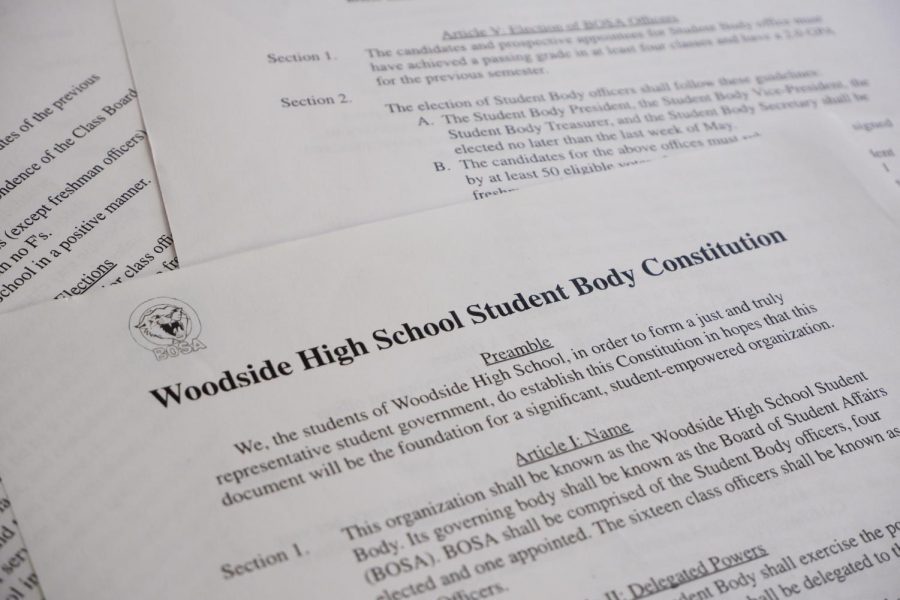 Similar to the United States Constitution, Woodside's Student Body Constitution begins with a preamble and is divided into articles.

Woodside’s Student Body Constitution governs a number of school proceedings, yet outside of the leadership classroom, some students remain unaware it exists.

Although the original author of the Student Body Constitution is unknown, current Instructional Vice Principal and former Student Activities Director Diane Mazzei estimates that it was first drafted in the 1970s. She inherited the Student Body Constitution when she assumed the role of Student Activities Director and established the first leadership class in the late 1990s.

“[The Student Body Constitution outlines] how to run fair and democratic elections, what the… expectations of the officers are, [and] what their job duties are,” Mazzei explained. “It really was a primary textbook for the officers.”

The Student Body Constitution, whose structure is modeled off of the actual United States Constitution, begins with a statement of purpose.

“We, the students of Woodside High School, in order to form a just and truly representative student government, do establish this Constitution in hopes that this document will be the foundation for a significant, student-empowered organization,” states the Student Body Constitution’s preamble.

Leslie With, who became Student Activities Director in 2006, still serves in the same role today. She finds that the constitution is applicable to a number of routine leadership tasks.

The constitution is split into a number of articles, each of which contains sections. Woodside’s five student body officials constitute the Board of Student Affairs (BOSA), which works alongside With to uphold the constitution.

“When it comes to actually enforcing the constitution… BOSA and Ms. With do it together as a group, with the chief justice being the one to lead the proceedings,” described Adrienne Evans, a Woodside senior and the BOSA president. “Leadership holds its members to a very high standard.”

In one recent incident involving a leadership student, With and BOSA needed to refer to Article IX of the constitution, which details the removal of officers. Leadership members note that some criteria for removal, including “behavior unbecoming and injurious to the school welfare,” is ambiguous.

“Just like the U.S. constitution, Woodside’s constitution is a document of interpretation,” Evans explained.

“In one case, the student resigned, and in the other case, they were impeached,” Mazzei stated.

However, in the recent incident, With and BOSA determined that the offending student would not be removed.

“If you’re suspended, you get taken off of leadership,” explained the student. “Because this wasn’t a suspension issue, I wasn’t taken off.”

“The constitution is reviewed every year by the BOSA team, and every year I have them do a State of the School report,” With commented. “Part of that is reviewing the constitution… There are little things like grammar and ‘he’ to ‘she’ that we change.”

Past additions include Section Nine of Article XI, which allows leadership to form committees, and Article X, which contains information about filling vacancies among elected positions. In 2001, the constitution was amended to add SuperBOSA, a monthly meeting in which one representative from each classroom meets with BOSA to discuss current school affairs.

“We knew we wanted to get representation of the student body, so SuperBOSA was born,” Mazzei described. “Lilli Milton was the BOSA president at that time. It was her initiative, and it is still in existence today.”

As the constitution primarily focuses on leadership functions, Colby Peck, a Woodside senior and the BOSA vice president, believes that those outside of the leadership class are not very knowledgeable about the document.

Mazzei agrees, noting that while a number of students are aware of the constitution’s outlined procedures, they do not know much about the document itself.

“Most people know we have elections [and] they vote… but I’m not sure if they really know that the students are guided by a constitution,” Mazzei remarked.

Within the leadership class, an anonymous leadership student also admitted they were not very familiar with the constitution either.

“We were given a little syllabus that we signed, which was our binding agreement to it,” the student said. “I highly doubt anyone read it; it’s like a terms and conditions type thing.”

Both Mazzei and Peck agree that increased knowledge of the Student Body Constitution will help students better understand the workings of the leadership class.

“People might assume that [leadership] is just a lot of fun or that it’s just for college, but they don’t know how [officers] have to fulfill their duties, bound by the constitution,” Mazzei stated.