Nobody likes trying to find parking in the Bay Area, but Woodside’s parking lot is another story. 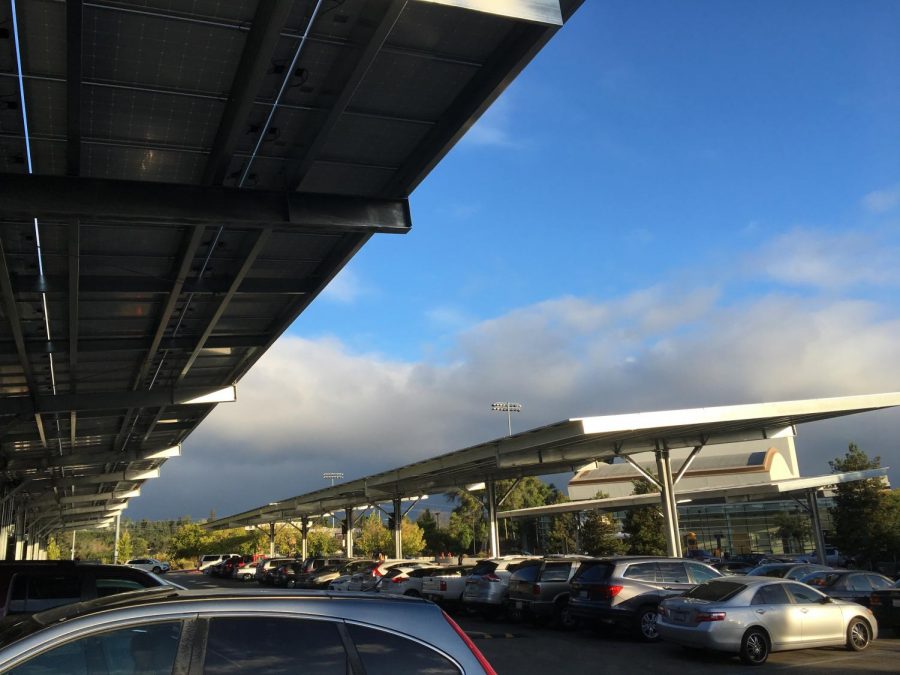 The ongoing construction in the Woodside parking lot requires the sectioning off of several parking spaces at a time.

To address the lack of parking spaces in student and staff lots, Woodside High School’s administration has revised the process for obtaining a parking permit for the new school year.

Over the past few years, attempting to park in the Woodside parking lot has evolved from a frustrating inconvenience to a more costly issue. Though students are required to purchase a parking pass to park in the student lot, many students park without passes, resulting in a lack of parking spots.

Woodside’s Director of Student Activities Leslie With explained how selling parking passes at arena check-in significantly contributed to the parking issue in prior years. Before school starts in August every year, all Woodside students are required to attend arena check-in to manage their finances, take their school photo, purchase a yearbook, and report to the health office.

“Students at arena check-in would pay for a parking pass… but they never followed up with their paperwork,” With explained. “And vice versa. Kids would turn in their paperwork, but then they actually never paid for it.”

Assistant Vice Principal Wendy Porter revealed how, due to the lack of completion of either the paperwork or payment, it was difficult for the Woodside administration to keep track of how many parking passes were being sold.

“I know it was an issue at the end of last year,” Porter said. “We want to make sure that [this year] we don’t sell more permits than spaces. [So now] we’ve changed the process so that everything happens at once.”

Towards the end of the last school year, the Woodside administration decided to stop selling parking passes at arena check-in and to sell to only juniors and seniors with current driver’s licenses.

“[We needed to] make the process clear to everybody,” With said. “For example, at arena check-in, we [didn’t sell passes but still] had the permit forms available. We put [the passes] online. We promoted it… on social media to help the students out.”

Along with limited spaces, another common student complaint was the lack of ticketing in the lots. Students who park without a pass are supposed to be fined $30, but some student drivers, such as senior Lauren Palermo, believe that parking passes are rarely checked.

“Last year… even though [sophomores] weren’t supposed to be able to park, they started parking [in the student lot],” Palermo explained. “I would come and have to circle the parking lot and sometimes park on the side or on Woodside Road if it was really bad.”

On the other hand, senior Ivria Crane explained that she can usually find a spot in the morning because she arrives early to attend her first period class.

With explained that most of the inspections are random as opposed to routine.

“In the past, we have done things [where we] pick a random day, [and] campus aides will go and look at the parking lot and check for a visible parking pass,” With said. “We’ve had random days where campus aides would actually be at the gate and check passes.”

Porter emphasized that random checks are preferred, especially due to “the resources it takes to [check] everyday,” but the Woodside administration will be “thoughtful” about how frequently tickets are distributed.

“It has to be randomized for effectiveness,” Porter said. “We’ve given people time to process and get everything in order… When campus aides… are on rotation rounds, or when Mr. Velschow and I go out, we [check and see if] there are cars without permits.”

“There’s no way for someone to be constantly looking at who’s coming into the parking lot, but I think [routine checks] would help solve the problem,” Palermo said. “[The administration should] actually enforce those policies.”

However, an unforeseen issue arose this fall. Along with the permanent loss of 20 spaces due to solar panel installation over the summer, the construction that was supposed to end before the start of school is now projected to end in October, resulting in the temporary loss of about 10 parking spaces at a time.

“There’s a lot of construction, and a lot of spots get closed,” stated Parker Macedo, a Woodside senior who drives to school. “I don’t like how [the lot] is smaller than [it was during my] sophomore year.”

With explained that the construction has restricted the number of available parking passes.

“We have stopped [issuing parking passes] at this time because of the number of spaces that are currently available,” With stated. “Once [parking] spaces are released from the construction, then we will [re]evaluate.”

“We… have to allow for guests on campus,” Velschow stated. “We get guest speakers, substitute teachers, [or] students who sometimes have a disability temporarily [and need] different parking accommodations.”

Porter predicted that both the student and staff lots will “lose a small number of spaces” once construction is complete, estimating about 10 or 12 spaces, but the exact number is still unknown.

“We can… potentially restripe some places, particularly in the student lot, to add some additional spots back,” Porter said. “We can’t put the work order in yet because the construction isn’t done.”

Though parking in the school’s lots is preferred, Velschow also mentioned that there are nearby alternatives.

“[Students] are allowed to park on Woodside Road as long as they don’t block the bike lane,” Velschow said. “Most of the kids who don’t have a spot tend to park out in the neighborhood.”

Tristan Ludvig, a senior who drives to school, offered a potential solution.

Palermo agreed with Ludvig, mentioning a “number system” where students who pay for passes would be assigned specific spots, but she admitted that parking at Woodside is a “difficult problem” to fix.

As for now, the Woodside administration will continue their randomized parking pass checks and adjust their process as needed.

“We decided to clean [the process] up on our end,” With explained, “and create a clear process that would be equitable to all.”