JUULs, Suorins, and Novos, Oh My 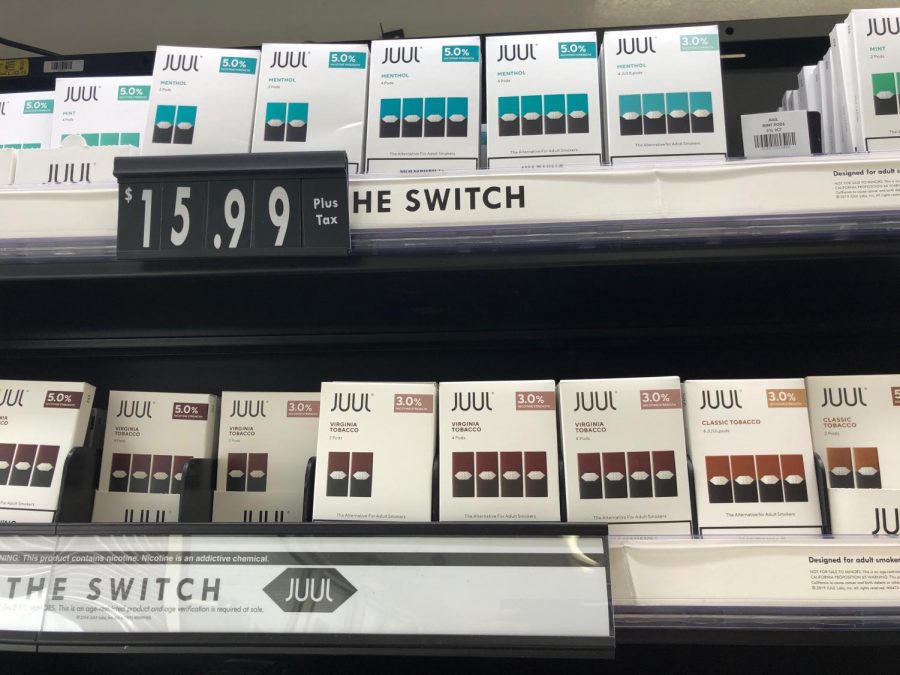 On September 11, Trump proposed a flavored e-cigarette ban in light of recent vaping-related deaths and illnesses as well as the increasing number of teens who use vaping products such as JUUL. However, many students doubt the ban will work if implemented.

“If people want to do something like vaping, they will continue to do it,” an anonymous Woodside junior explained. “Especially when you think about how people under the vaping age were still able to get vape products and still vaped.”

The National Institute on Drug Abuse found that more than one in four students in 12th grade vaped in the past month alone.

“Trump’s plan would just keep the black market thriving,” Ryan Margolis, a senior at Saint Ignatius College Preparatory, declared. “It is also ridiculous to have vapes be illegal and cigarettes be legal.”

While some students acknowledge that banning e-cigarette flavors would help discourage underage use, they uphold that the ban would be futile.

“It’s good, since those flavors are definitely targeting younger age groups,” Woodside senior Chase Eavis reflected. “I think it won’t be as effective because vaping is still not for our age. You can’t buy pods, but it’s still such a big trend.”

“All of my friends that vape just joke about [the vaping-related deaths],” Margolis reflected.

Many students are not worried about the health effects of vaping.

“No, I’m not worried because of the recent vape related deaths,” the anonymous student revealed. “I made a choice to vape and can make a choice to stop, and I haven’t.”

“You’re going to be an anxious mess,” Prodromo predicted. “We talk about this all the time. Their prefrontal cortex, their brain, is dying. Their brains are literally dying… They don’t always think deeply about what they do.”

Students start vaping in various ways, from seeing others using their devices in public to watching videos of vape tricks on YouTube. However, stopping vaping is not always easy.

“I started vaping by choice; I was never pressured or influenced by my peers,” the anonymous student remembered. “In reality it was something I turned to after a breakup, and I became completely dependent on it.”

Constant e-cigarette use results in problems beyond simple dependence.

“I’ve seen people turn to cigarettes after vaping; I’ve seen people have strong reliance on it, with people literally shaking if they don’t have it for a certain amount of time and with their whole lives being around it,” Eavis stated. “It’s pretty much become their survival, just because they need it to get by throughout the day.”

In addition, vaping is easy for students to hide, leaving teachers with a problem.

“My experience with it is that it is very hard to catch,” Prodromo described. “I had a student who, on his birthday last year in my fifth-period class, chose to vape. I didn’t see it because it’s hard. They’re trying to vape, and they know when you aren’t looking.”

The frequent use of vaping devices, including JUUL, Novo, and more, create conflict in the classroom.

“I wish there were better consequences to doing that,” Prodromo admitted. “It becomes a battle. I don’t want to be in a battle with my students all the time. I just think, ‘do you have that little self-control?’”

Despite the recent vaping-related health issues, many students continue to use their devices.

“I could die today or tomorrow for any reason, and it may be for vaping, but it may not be,” the anonymous student stated. “Death and health issues are daily things that have to be considered. Just getting into a car every morning, you risk getting into an accident, or walking onto a school campus. We risk our lives every day; slowly killing myself by vaping is not a big deal.”