In the 2020 elections, former vice president Joe Biden is the front-runner of the Democratic Party. 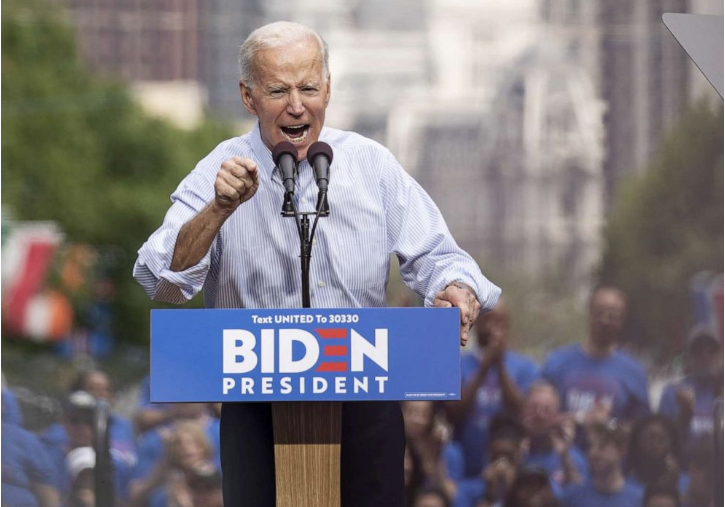 Joe Biden talking at a presidential rally kickoff in Philadelphia.

In the 2020 elections, candidate Joe Biden, Barack Obama’s former vice president, is a frontrunner for the Democratic nomination. Biden’s vision is to go back to the founding principle of the United States: that all men are created equal.

Biden has three previous unsuccessful runs for president: in 1984, 1988, and 2008. According to a Fox News poll, 33 percent of white Democratic voters and 38 percent of non-white ones currently support him.

Some students at Woodside are excited for Joe Biden running for president. Elise Arana is one of those students; she believes it is a good idea for him to continue in the race.

“I actually felt pretty excited about [Biden] running,” Arana, a freshman at Woodside, said. “I believe he did a good job [as vice president], and I can’t wait to see what he does as a president.”

Biden faces many tough competitors from his own party. The Democratic race is already extremely convoluted, with other highly recognizable candidates running against him.

“There is Elizabeth Warren, and I think Bernie Sanders is running again,” Arana said when describing the other candidates. “There was one that was a vegan [Booker], and one that was gay [Buttigieg].”

Analysts believe Biden is such a popular candidate due to his previous political experience, as well as his demographic chance against incumbent President Donald Trump.

The diversity in the Democratic Party has been touted as a benefit by some, but the high multitude of candidates has brought down campaign numbers and forced smaller candidates to the sidelines. And, although Biden is currently leading, the Democratic nominee will not be selected until July.