The Class of 2019 will be the first to wear a single robe color at graduation. 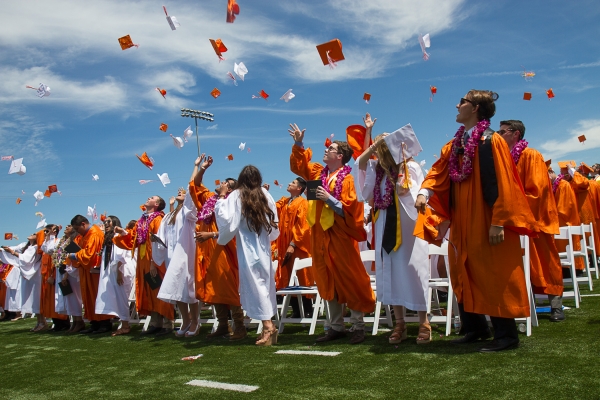 For the first time in recent history, all Woodside High School seniors will don the same color robes at graduation.

Previously, students could pick between white or orange robes, with white being the traditionally female choice and orange being traditionally male. This year, however, Woodside joins the majority of schools in its gown provider’s district by having all its students wear the same color—in this case, Wildcat orange.

Leslie With, Woodside’s Director of Student Activities, explained that the change was inevitable. “After looking at the information and deciding to make a change, it’s going to occur… so why wait?”

The Woodside Administration, along with its student government, had made the decision to change Woodside’s robes to a uniform orange for the Class of 2020 earlier in the year. However, the choice to give current seniors all one color robe was up for debate until early this week.

The movement to change the robes for the graduating Class of 2019 was spearheaded by Woodside’s Gender and Sexuality Alliance (GSA). Zeejai Leonard, the president of GSA and a graduating senior, told the Paw Print earlier this year that “Our current issue is while we still technically have the choice, and anyone can choose orange or white [the tradition] still sets up gender expectations and stereotypes.” The GSA further explained that non-binary or genderqueer students might feel pressured or stigmatized by the robe choices.

While the idea might have first gained traction within the GSA, With hopes that one color for robes can appeal to the larger Woodside community.

“It did start with the GSA,” With said. “But I see the change as being more than that. I like the idea that we are a class, a school. As we graduate together, why not be together [in color]?”

A recent survey sent to Woodside seniors questioned them about their gown preference, asking if they wanted to keep the traditional orange and white or transfer to one color. Though some students misinterpreted the survey as a vote or took part despite not being a senior, With saw it as an opportunity for student government to “get an idea of where people stand.”

The results of the survey were mixed, although the “majority of people wanted to stick to the traditional.” According to With, the results didn’t show unanimous preference for one side or the other.

Many female students who voted to keep traditional colors explained that their problems with the one-color robes didn’t stem from a wish to uphold the gender stereotypes of two colors, but instead because they didn’t want to wear orange.

Kathryn Williams, a senior, explains her thoughts: “One color robe is fine, but orange ain’t it.” Williams also expressed concern for her senior pictures, which had been taken in a white robe.

Other students believe that gender stereotypes can be removed from the robes without removing the two-color system.

“I think we should be able to choose the color of our graduation gowns based on the color we want,” explained Woodside senior Claudia Kister. Devon Sheehan agrees, stating that, “I love how we are taking trans and nonbinary people into account… but I think instead, we should remove the connotations assigned to the colors and let everybody pick whatever.”

When asked about the possibility of the entire school wearing white at graduation, With stood firm.

The controversy surrounding Woodside’s graduation gowns has allowed students to voice many differing opinions. While some believe one color gown will help genderqueer or non-binary students feel more comfortable, others think gown color should reflect the individual preferences of the student.

Junior class president Adrienne Evans further explained the decision. “I would hope that the atmosphere at graduation is one where all students feel comfortable, in addition to the main focus being a celebration of their accomplishments over the past four years,” she stated.

Seniors were informed of the decision at class boards today at lunch, to mostly negative reactions.

“Many seniors felt their voice and feedback was ignored, but I think both sides are valid,” said Daniela Sanchez-Sevilla, the senior class president. However, turnout at senior class boards was low, and has been low all year. With so few students attending, student officers say it can be difficult to gauge student opinion.

To students who are upset about the all-orange graduation robes, With has a message: “Graduation is not about your color; it’s about representing your time as a Woodside Wildcat.”