A Conservative Majority on the Supreme Court May Affect Civil Rights 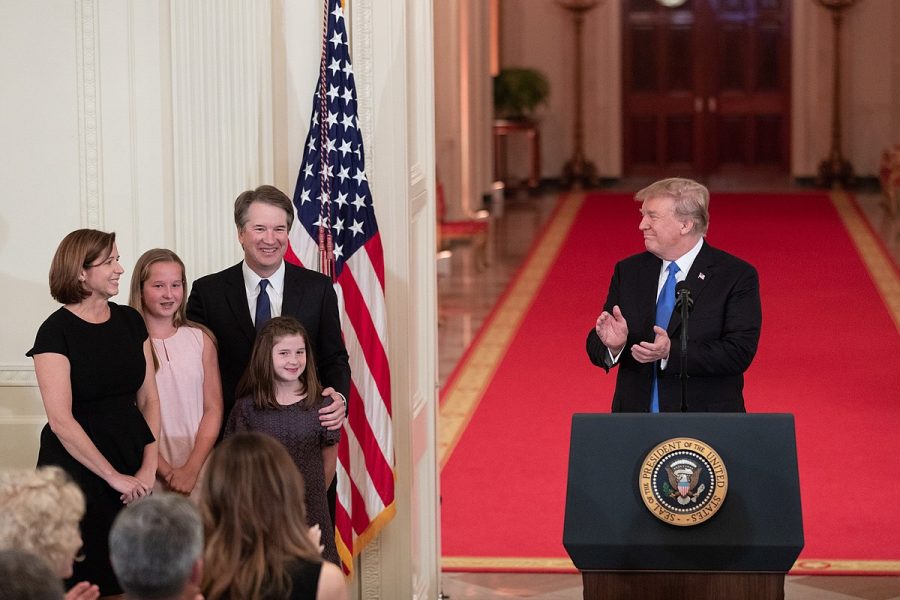 Abortion, gun control, and LGBTQ+ rights, among other controversial topics, may come under debate if the Senate appoints Judge Brett Kavanaugh to the Supreme Court and solidifies a five to four conservative majority.

President Trump nominated Judge Brett Kavanaugh to the United States Supreme Court following the retirement of Justice Anthony Kennedy in July. Last Friday, Kavanaugh completed a week of confirmation hearings in front of the Senate Judiciary Committee, a subgroup of the Senate comprising 21 senators. During these hearings, the committee members―led by Chairman Chuck Grassley―investigated Judge Kavanaugh’s courtroom experience, past cases, and political ideologies.

After the confirmation hearings, the Senate Judiciary Committee would then take Kavanaugh’s nomination to the Senate to vote on. Although the committee could refuse to report the nomination if a majority of its members opposed, the 11 to 10 Republican majority and tendency to vote along party lines makes such a decision unlikely.

“[Judge Kavanaugh] is in a super tough spot,” Buckowski decided. “From a human being point of view… [these are] going to be some of the worst couple weeks of his whole life… Once he finishes his committee hearing―and he will make it through committee, just by the numbers―the poor man has to do it all over again in front of the whole Senate.”

Buckowski believes that Judge Kavanaugh will eventually be confirmed as a Justice of the Supreme Court but anticipates that the official confirmation will not take place until October due to the variety of questions asked. One of the major talking points is the more than 100,000 pages of Judge Kavanaugh’s records that remain confidential; the committee obtained thousands of those documents from a lawyer for former President George W. Bush, many of which have since been leaked to the public.

“So many documents are being released,” an anonymous Woodside junior commented. “I think it will take some time before we see the extent of these documents, and I think the documents could absolutely make or break Kavanaugh’s chances, although I think it’s likely they won’t have any information that is that incriminating.”

Buckowski similarly believes that the released documents will have little impact on Judge Kavanaugh’s chances of acceptance to the court. Still, she is sure that, if released, many of the pages could turn the hearing on its head.

“You don’t hide what you don’t feel like you need to hide,” Buckowski stated. “Everyone who’s babysat a toddler knows that. It’s not in our instinct to hide something, unless you think something you’re hiding is going to get you in trouble or get you shamed… Technically, [the documents] don’t belong to [the government], they belong to us: we the people. Everything should be a matter of public record unless it’s National Security.”

The revealed documents included an email in which Judge Kavanaugh questioned the Supreme Court’s landmark Roe vs. Wade decision, which ruled restrictions on abortion unconstitutional. This reignited talk about Judge Kavanaugh’s political views and even prompted pro-choice and pro-life websites to feature unconventional advertisements either endorsing or opposing the judicial appointment.

“[Judge Kavanaugh] is a right-leaning judge,” Buckowski claimed. “His arguments are the most extreme-right judgements that there have ever been, and I have not agreed with them… It feels as if [Kavanaugh’s] going to be a straight-down-the-line right [judge].”

While Justice Kennedy was formerly the Supreme Court’s “swing vote,” sometimes siding with the liberal half of the court and sometimes siding with the conservatives, Judge Kavanaugh’s views seem to fall more strictly upon Republican party lines. His appointment would allow the conservatives a majority rule to potentially overturn heavily debated rulings or enforce new ones.

“I personally believe that Brett Kavanaugh’s political standpoints are a bit preposterous,” declared Daniela Thorne, a former Woodside student now living in Carrboro, North Carolina. “I would be most worried about the overturning of Roe vs. Wade, for the sake of women’s health, and how his opinions on the Second Amendment, as well as gay rights, could swing the Supreme Court to make unjust decisions.”

Still, some doubt that Judge Kavanaugh’s appointment could lead the Supreme Court to overturn Roe vs. Wade, especially while public support for the case is at an all-time high of 71 percent.

“Purely in terms of his legal skills, [Judge Kavanaugh] seems qualified and somewhat trusted,” the anonymous Woodside student evaluated. “From the people I know, there’s some concern that [the Supreme Court] could overrule Roe vs. Wade… I doubt they will reverse many social-related decisions. I think their impact might have more impact with economic policy, which I have mixed feelings about… they might side with deregulation since the Republicans often paint themselves as against ‘bureaucratic regulations.’”

According to a poll by the Washington Post, Judge Kavanaugh’s nomination has sparked a lot of controversy; approximately 38 percent of Americans believe he should be confirmed while 39 percent believe he should not be.

“His stance… [is] so opposing to my beliefs that it scares me that he could be on the Supreme Court for life,” Thorne expressed. “However, if I drive out just a half hour or less into more rural parts of the red state I live in, it is clear that these people who support Trump, and will therefore support Kavanaugh, exist.”

Meanwhile, Buckowski notes that many Democrats, including Californians, oppose Judge Kavanaugh simply for his connections to President Trump.

In perspective, though, past nominations have been arguably more controversial.

“Neil Gorsuch, the [justice] who just got appointed, has some of those, ‘but you’re associated with this president?’ conflicts from the Democratic Party,” recalled Buckowski. “Back up two years to when Antonin Scalia died and then the full-on blocking of ‘we can’t hear you, la la la’ near Merrick Garland? I would say that’s actually more controversial.”

“You can’t necessarily guess how a judge is going to rule based on which president put them in,” Buckowski added. “The strongest example of that is Dwight D. Eisenhower, a Republican, who appointed Justice Earl Warren, and then the Warren Court was… actually the most liberal era of the court.”

However, if Judge Kavanaugh proves to follow party lines, many worry about how unbiased the court would be. The anonymous student believes that the court may have been intended to be bipartisan but does not think it ever truly was.

“I hope Kavanaugh is more impartial if he receives the seat, but I won’t be surprised at all if he isn’t whatsoever,” the student explained. “For Democrats, [his appointment] will confirm general popular distrust for the Supreme Court and the federal government… For Republicans, [trust] will improve.”

Increasingly strong partisan divisions within the Supreme Court may pose a threat to the future of the justice system.

“Ultimately, you can’t trust someone to be an impartial judge if you know how they’re going to judge already,” Buckowski reasoned. “If… four of [your teachers] always give you A’s, and three of them always give you F’s, it’s really hard to care about A or F work… We know that judges don’t have political parties… Officially they’re not part of a team, but it’s as if they’re players wearing jerseys right now, like ‘this is the red, and this is the blue,’ and that really compromises trust in the whole institution of checks and balances.”