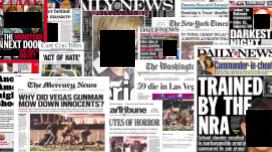 Yesterday, videos created by the Parkland shooter describing his motive and plan were released by prosecutors. Not long after, headlines popped up, quoting the killer’s words and splashing his image across news sites.

Hover over each news outlet to see examples of headlines.yle=”font-weight: 400;”>

America was new to the idea of a school shooting; it hadn’t yet learned its lesson. But year after year, the cycle continues and the link between media and mass shootings becomes harder to ignore. The Virginia Tech shooter infamously named the two Columbine murderers in his own manifesto, calling them martyrs and expressing his desire to be like them. According to research done by Mother Jones, the Columbine attack inspired at least 74 other plots (21 of which were carried out and 53 that were stopped by police).

That brings us to the most recent attacks in the news ‒ Parkland and Santa Fe. The released videos show the Parkland shooter gleeful at the thought of nationwide recognition and his desire to be ‘the next school shooter’. The Santa Fe attacker had nearly identical attire and weapons to the Columbine shooters, sporting what seems to be the uniform of the modern-day domestic terrorist.

‘School shooter’ has, in the minds of these individuals, become a sort of badge of honor. They grow up seeing the fame shooters achieve and follow in the footsteps of those before them – fame brought on by constant news coverage. Mass shootings have infinite causes and infinite solutions; clearly, the media has a role and this needs to be addressed.

There is no denying that the news heavily influences how some people live, and eventually end, their lives – there is evidence that suicide rates increase if they receive lots of coverage, and decrease if reporting practices are changed (i.e. not using them as top headlines, not reporting on specific details, etc). It’s not too far-fetched to assume that similar results would occur in the context of mass shootings.

I tortured myself & watched videos of the shooter talking about his attack on my school.

A great way to stop school shootings is to NEVER MENTION the shooter’s name or give them notoriety. He discussed how the world will know who he is. He wanted this

But what can we do? The public has the right to know, and it’s only human nature to try to understand what goes on in the minds of a killer. The problem is that the media takes advantage of that curiosity.

News outlets are chasing the headline that will get the most views and disregard the long-term consequences of their coverage. If we want this cycle to end, we have to stop clicking on their faces and on their quotes; we have to stop caring about what these monsters have to say because it isn’t worth our time. We shouldn’t care, because no amount of troubled backstory or bigotry or twisted revenge story will explain or excuse what they did.

“We need to stop giving him a face,” a parent one of the Parkland victims said about the released videos. “Because this evil will just continue to happen if our society keeps glorifying school shooters.”

Groups like No Notoriety call for changes in reporting practices. No one is suggesting that the shooter’s name, face, and manifesto shouldn’t be available to the public; they simply don’t want these details to be front page news, to be glorified, to create martyrs for future killers.

Anderson Cooper became a part of the campaign last October; when reporting on the Oregon shooting, he made a point of not saying the perpetrator’s name or showing their face (although CNN still does). Other reporters and outlets should follow suit.

Giving these people a name, face, and gives them the opportunity to be worshipped and revered by others on their path; these outlets are rewarding mass murderers, giving them just what they wanted. If they really cared about public safety they would refrain from sensationalistic journalism practices.

“Stop showing his face and name,” a Stoneman Douglas survivor tweeted. “Remember my friends. Remember my teachers and coaches.”