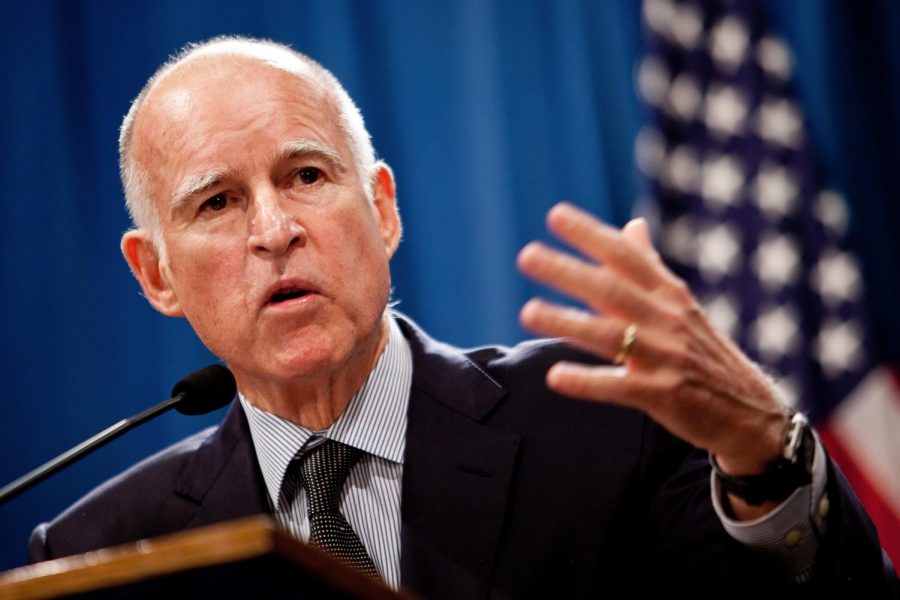 From puppeteers to actors, transhumanists to retired truck drivers, California’s gubernatorial candidates prove that you no longer require political experience to be a politician, an argument that divides the Woodside community.

Similar to the president, the governor of California can only serve two consecutive four-year terms. California’s current governor, Jerry Brown, nears the end of his second term; the elections office sent out a voter information guide with statements from candidates hoping to succeed him. The primary elections will take place on June 5, and the two candidates with the most votes will advance to the general elections in November.

“An interesting thing about the vote this year is that five counties, including San Mateo County, are going all towards mail-in ballots,” commented Kelsey Theriault, a Woodside history teacher. “Everyone will get their ballot mailed to them, so they can either vote and mail it back or drop it off at a polling place.”

Theriault believes that the convenience of this voting system will prompt more Californians to vote. She has not voted for California governor in the past since she previously lived in New Jersey, but does plan to vote in this election and will take the candidates’ political backgrounds into account.

“I am considering voting for Gavin Newsom, just because he was lieutenant governor,” Theriault explained. “I think things that Jerry Brown has done have been good for California, and I think that Gavin Newsom will follow in a lot of those policies; he certainly has the experience to do well at the job. John Chiang is a lesser-known candidate… he’s the treasurer of the state right now, so he really cares about providing affordable housing and homelessness, some of the major issues. [Newsom and Chiang] are my top two choices right now, but I think I’d need to do a little more research to know for sure.”

Democrat Gavin Newsom is the current front runner of the race. Theriault can not be sure that he will win, but predicts that the next governor will be a Democrat.

“California is unique in that we’re probably going to elect a Democratic governor, but I hope that all the candidates have really positive debates about things that people care about so that people can make an informed decision,” Theriault reasoned.

Isaac Reynolds, a tenth grader at Woodside who is too young to vote but has an interest in politics, agrees with Theriault that a Democrat is likely to win. Still, if he could vote, he would have supported the Republican candidate Yvonne Girard.

“She is a veteran,” Reynolds pointed out. “A veteran is someone who could understand what some of the problems are, and they’d have the resolve to see things through… She also wanted to change tax laws and try to reform taxes in the state, and I think she might be able to do that.”

Conversely, senior Mollie Kraus, who recently turned eighteen, will vote for the first time in the primaries and expects to support a Democrat.

“I’m super excited to be able to vote!” Kraus expressed. “I’m choosing to vote because we’re given this right that many people in other countries don’t have, and it’s important to me that my voice is heard. Women worked so hard to get the right to vote, and I want to honor their sacrifices.”

The Paw Print reached out to all twenty-seven of the gubernatorial candidates and received exclusive statements from eleven of them— including Republican candidate and psychologist Robert C. Newman II, who believes that being a religious role model to the people is more important than having political experience.

“God has a Divine Plan for all humans,” Newman insisted. “Our State must return to a reverence of God, Jehovah. We must respect life from the unborn through natural death. The fruits of one’s labors must not be taken to excess as is the case in California… The U.S. Constitution is the Supreme Law of the Land.”

Klement Tinaj, an actor, educator, and Democratic candidate, similarly hopes to inspire citizens and focuses on putting the wellbeing of the people before personal profit.

“I am only 28 years old and I want young people just like yourself to look up to me and say, ‘if he can do it, I can do it,’” Tinaj remarked. “I want to give hope to the working class, and a voice to the voiceless… I will invest in the education system… I will complete the state water project and… pass health care for all. Everyone deserves a place to call home.”

Democratic candidate Delaine Eastin, the only candidate to be elected to local government, was first in her family to attend college; as a result, she aims to reform education and provide citizens with equal opportunities.

“[California has] the highest number and percentage of poor people, including children, in the nation,” Eastin emphasized. “We also have the highest number and percentage of homeless individuals. We rank 41st in per pupil spending, but first in per prisoner. This is a disgrace… I was able to get a job, buy a house, and live the California dream because I had a great education. We can do that for our students again.”

Peter Y. Liu, a veteran and former army journalist, is running as a Republican candidate. He hopes to help citizens prosper through his Community Empowered Safety Plan and produced his own campaign song, titled “I am Running for Governor.”

“[If I am elected], people will learn to be rich the legal way, without depriving the property and the lives of others,” Liu predicted. “I will pardon almost all victimless crimes, like prostitutes and johns, because sex is a freedom of expression and should be protected by the First Amendment of the U.S. Constitution… If the government is in the enforcement of morals, then we’re not a free people.”

Along with his controversial goal of banning social media for youth, nonpartisan Shubham Goel aims to create renewable energy and make political decisions more transparent to the public.

“I’m running for Governor of California to show young people and the everyday person that you don’t need money or fame to make a difference,” Goel stated. “Being the youngest candidate in the race at 22, I can relate a lot to young people and the struggles they face with education and workplace configurations.”

Christopher N. Carlson, a part of the Green Party, approaches the gubernatorial elections from an unconventional angle.

“I am running for governor because I wrote a puppet musical, and I really want people to hear the message in the songs,” Carlson explained. “[If elected], I would start work on a space exploration budget and create a state department of astrophysics. I would develop an infrastructure that could withstand mass migrations of people and all kinds of power and water failures. I would talk with world leaders and be the West Coast’s critic of the sitting president.”

Meanwhile, Libertarian Zoltan Istvan is an ardent supporter of transhumanism, which uses technology to improve the limited human condition.

“The first thing I’d do is lower taxes,” Istvan declared. “California has a lot of unnecessary taxes. I’d also introduce innovative ways to use science and technology to help run the government. Finally, I’d introduce my Federal Land Dividend, which is a Libertarian version of a basic income.”

“Wasteful spending of taxpayers’ money has worsened the living conditions in California,” Wildstar argued. “Once elected I will eliminate the income tax entirely… I’d also be able to show voters, as well as people throughout the world, that libertarianism works and is the solution to bad politics, since I would be the first Libertarian in history to ever be elected governor of a state.”

Desmond Silveira, a member of the American Solidarity Party, wants to bridge the gap between Democrats and Republicans.

“I feel that the two party duopoly can not adequately represent the interests of the majority of Californians,” Silveira noted. “I recognize that… my chances of becoming governor are slim, but a third party candidate can ‘win’ in other ways. I can run a successful campaign by shifting the major parties to the left or right… I am pro-life, pro-family, [and] pro-marriage, and support freedom of religion from needless government intrusion.”

Retired truck driver Johnny Wattenburg has no party preference and boasts a simple campaign slogan: “why not.”

“I am running for governor because I feel I can make a huge difference with the state of California,” Wattenburg asserted. “I do not look at things from my perspective of a politician… I don’t claim to have all the answers but I am willing to work hard with others to obtain the answers and make improvements. [One] of the main changes I would like to create is reforming the gas tax… We would also no longer be a sanctuary state.”

Finally, at age 93, veteran Albert Caesar Mezzetti is the oldest gubernatorial candidate and has no party preference.

“I served my country as a wounded marine corps machine gunner in three wars,” Mezzetti recalled. “If I am voted your Governor of California, the first thing I will do is set aside the unfair law making us good people lock up our guns and [instead] allow everyone who is accepted by the F.B.I. to carry a loaded gun on his/her person… When I was in the wars and an enemy soldier shot at me, I shot back.”

“I’m okay with it as long as I agree with their platform, because sometimes new is a good thing,” Kraus reasoned.

Reynolds agreed with Kraus, but Theriault would not feel comfortable with such a candidate in office.

“I think a candidate that is responsible for representing 39 million people should have some type of experience being an elected official,” Theriault argues.

Overall, regardless of political views, Kraus concluded, “I definitely encourage others to vote, because if we don’t tell our legislators what’s important to us, nothing will ever change.”