Not Talking About “Hella” or “Lit” 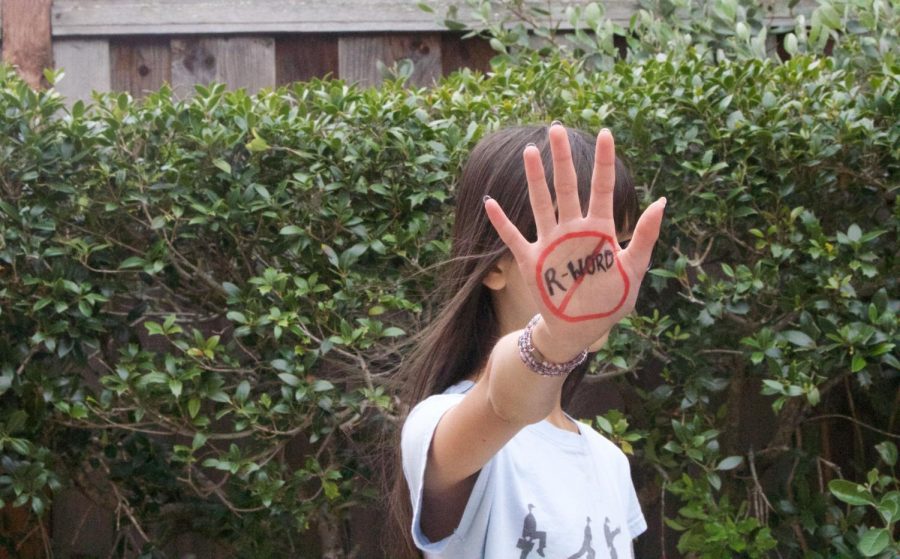 Sixth grader Keira Lee hopes to end use of the R-word at her school.

The sole purpose of this article is to spread awareness for how, even when normalized, derogatory slang remains hurtful to others.  The Woodside Paw Print does not in any way promote the use of the slang words described in this article.

You know what I’m talking about.

I overhear these phrases used every single day in common conversations, but I never interrupt these people because I can already anticipate excuses.  I didn’t mean it like that.  It’s just a joke. Everyone says it.  It doesn’t mean anything.

“I don’t hear slang [around campus] or in the classroom very often… [but] I sometimes hear common terms like, ‘he’s so gay,’ or ‘stop being gay,’” Woodside teacher Callie Reed remarked.  “For the most part, I would say, at least from the teacher’s perspective, it’s probably very different than [the students’].”

And it is.  According to an Instagram poll where 143 high school students answered, 78% of high schoolers hear words like “retarded” or “gay” everyday used in a conversational manner.

“I hear people use inappropriate slang all the time,” Woodside sophomore Caroline Daniher commented, who often hears the n-word, “retarded,” and “gay” at school.  “Most people just don’t realize that these words are actually offensive and hurtful to some people.”

Among students, words like “fa****” or “retarded” are commonly used around Woodside campus, acting as crude synonyms for “idiot” or “stupid.”  Even if the people using this language mean no ill intent, these words remain highly disrespectful and reinforce stereotypes and hatred towards certain communities.

“I hear a lot of the n-word,” sophomore Omar Bravo added, “and sometimes fa*.  A lot of people don’t care though.”

Why don’t people care?  In 2018, keeping up with the latest trends, music, and new slang is essential to teenage culture.  Groups of friends say it. Mainstream artists sing it.

Even though these words are commonly used in friend groups on campus, schools are places where everyone needs to feel comfortable and safe, and the persistent use of derogatory slang on campus strongly affects students and their ability to focus.  Such slang distracts from a safe learning environment and encourages discrimination.

Seventh grader Clara Chiu, who attends a third grade to eighth grade school in Redwood City, admits that her classmates use inappropriate slang everyday, and she has experienced ethnic discrimination in school as young as the age of eight.

“One of the words we learned [in history class] was ‘coolie,’ an offensive term for Asian laborers,” Chiu explained.  “Some of my classmates would just look at all the Asian kids in the class, including me, and call us coolies.”

A year later, one of Chiu’s teachers used an offensive slang term during a class meeting.

“My friend and I got told on for using sign language in class, because some kid interpreted it as rude gestures,” she described.  “My teacher was like, ‘Wow, they must be retarded or something.’”

Chiu elaborated that some students seemed confused or disapproved of the teacher’s use of the term, but the teacher failed to notice these subtle reactions and proceeded with the discussion.

“[Slang] fuels the stereotypes of misconceptions, and it paints a group of people with one characteristic or idea of who they are without even getting to know them,” Reed explained.  “If you keep using terms like that… you could truly start to believe that about the majority of a certain group of people.”

Even if a slang term is not directed specifically at one particular person, it is still directed at a group of people.  Using this crude slang as a synonym for a negative word implies and enforces stereotypes.

Reed believes that people who use such slang are “misinformed, or uneducated on the history of certain terms.  They think it’s cool or funny.”

When disrespectful language invades everyday slang, it’s difficult to prevent the use of words heard everyday.  Students often feel pressured to use certain slang terms to fit in with others, with heavier influence on those whose friends use such slang.

“If you just keeping using [slang], it becomes common and normal, so it’ll just get passed down,” Chiu agreed.

Educating people about the impacts of crude language is essential to suppress vulgar slang.  People need to become aware that these terms are more than words: they’re slurs, insults, assumptions.

Reed emphasizes the importance of “getting informed, talking about incidents when they do arrive, [and] realizing that your words do have consequences and can inflict pain on other people.”

Standing up to friends is never easy, but spreading awareness and confrontation in the moment is critical to help suppress the use of this slang.

“If you don’t know what a term means or you don’t think it’s kind,” Reed advised, “then you probably shouldn’t be saying it at all.”