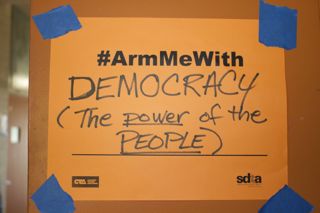 Many Woodside teachers wore orange beads and presented signs with the hashtag #ArmMeWith for last Friday’s National Day of Action Against Gun Violence in Schools.

Earlier in the week, Edith Salvatore, the president of the Sequoia District Teachers Association, sent an email encouraging SDTA members to participate in the event and provided information about gun violence in schools. She also encouraged teachers to explain the movement to students when asked, but to refrain from having political discussions during class.

“SDTA is encouraging our members to wear orange on Friday,” read the email from Salvatore,  “and to participate in the #ArmMeWith movement as well.”

Many teachers followed suit, with signs in classrooms and on doors reading everything from #ArmMeWith Music, to Democracy, to communist propaganda.

The hashtag is meant to be a retort to President Trump’s suggestion that arming teachers with firearms would prevent gun violence and future school shootings.

“I think it’s stupid,” Woodside math teacher Joshua Gelb said. “Like, I’m not gonna shoot anybody. I’m not paid for that kind of stuff.”

Other teachers cited concerns about an individual’s ability to handle a weapon and use it effectively.

“I think that in general teachers are great,” Brooke Darmanin, a Woodside science teacher said,  “but not every teacher in every mental state is trustworthy to make choices about who’s a threat and who’s not.”

It is also important to remember that a teacher’s main purpose is to educate children, and that they are humans with flaws.

“People snap all the time,” Gelb remarked. “My wife [an elementary school teacher] just told me one of her coworkers threw a book at a kid.”

That’s not the only thing Woodside teachers fear when presented with the notion of keeping a gun in the classroom.

“Students could steal the gun, students with bad intentions,” Darmanin pointed out. “I think that there will be accidental discharges of weapons…someone could hold up a classroom.”

Woodside teachers were also given an article with statistics about gun violence and active shooter situations. Among other things, the article explained that unarmed civilians have disarmed shooters more often than armed civilians, and that more people with guns makes identifying and taking out the target in an active shooter situation much more difficult for police.

Teachers also worry about how being armed could change the dynamic between them and their students.

“My goal in a classroom is to establish a safe place…a place where a student can come in and feel comfortable and tell me about what’s going on in their life, at home or at school,” Raphael Kauffmann, the Audio Production teacher, said. “[I can’t] pretend that that conversation could be had with someone that’s actually strapped with a gun on their waist…I can’t see that happening.”

Darmanin also believes that keeping an open conversation between students and adults is critical in minimizing school shootings, rather than arming teachers.

“There’s more important things to do like adding more teachers and more school psychologists,” Darmanin stated. “And more guidance counselors so that every guidance counselor actually has real contact with students.”

The issue of gun violence is prevalent throughout America, and there are infinite ways to approach the issue ‒ but for now, it does not seem like guns will be making their way to Woodside teachers any time soon.

“We should not arm teachers,” Darmanin said, “because more guns is not the answer.”