From elementary schoolers to millennials, young people have risen to the task of advocating for gun control. 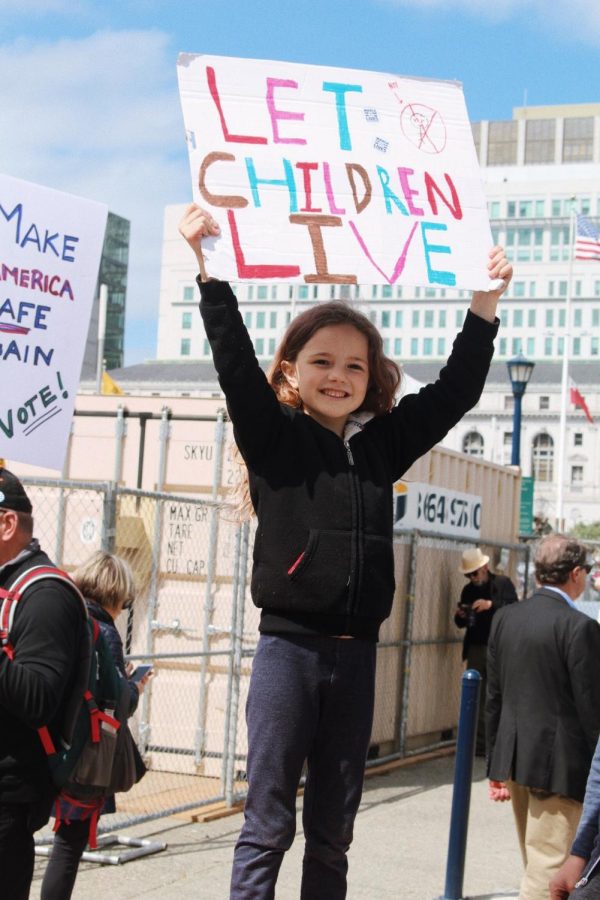 As Americans rally together to call for gun control in the wake of deadly mass shootings, a new voice has risen to the forefront: the youth.

On Saturday, March 24th, hundreds of thousands marched in over 800 different locations to advocate ‘common-sense’ gun law reform and honor the lives lost in shootings across the country. Teenage survivors of a recent school shooting in Parkland, Florida, have spearheaded the movement, dubbed ‘The March For Our Lives,’ and have been staunchly advocating for the voices of young people nationwide.

In San Francisco, march organizers themselves focused on the importance of youth activism, reminding patrons that the march is ‘student led’ on their website. And student activists -along with adults- took to the stage this weekend to advocate for universal background checks, bans on the sale of assault-style weapons, and most of all, for citizens to continue the fight.

Lia Jon, a student at San Ramon High School, was moved by the speakers’ sentiments, remarking that “we can’t just forget about the movement after today. Young people have a lot more time to do something about this…and we have long memories.”

Lia isn’t the only one who is determined to continue that battle. Families, teens, and older citizens alike marched from the Civic Center to the Ferry Building, with many children holding handmade signs with slogans like ‘arms are for hugging’ and ‘kindergarteners for gun control.’

Six-year-old Tiana and her brother Vinnie were among the many elementary schoolers at the march. Tiana, holding a sign that read ‘let children live,’ explained to the Woodside Pawprint that her sign was to remind people to “protect children.” After a pause, she elaborated: “I want every single child to live so we don’t lose all the fun in our lives.”

From these siblings to students from San Diego, the voice of young activists was everywhere at San Francisco’s march. Families with young children could be heard explaining what signs debunking the National Rifle Association meant, and groups of teens discussed their voting prospects for the 2018 midterms.

But Brenda Lara, who drove nearly eight hours to come to the march, had advice for young people who don’t feel as politically empowered, reminding them to “speak up and tell your friends how you feel and what you believe in…educate yourself and then educate others.”

Teenage activists have been gaining national attention lately for their work with gun control. And at marches like these, it can feel as though every young person is excited to participate in the democratic process. But according to Pew Research Center analysis, millennials continue to have the lowest voting turnout of any age group, and so the question remains: can the youth have a real political impact?

Laurie Garcia, a self-proclaimed baby boomer, thinks so. Holding a sign reading ‘oldsters for youngsters,’ Garcia was not shy about her excitement and faith in “teenagers and even little kids,” saying, “It’s time to give (the kids) a chance…our government could learn from this.”

Faith in young people was a common theme at marches across the country. For many families, the political engagement of teenage activists was a way to cultivate thought and excitement in their own, often younger children.

This was the case for Edward Castelanio, who attended the march with his two young children. Citing Parkland teen Emma Gonzalez as “a positive role model,” Castelanio looked down at his own daughter and smiled.

“I want to show my children that their voice matters. They can take action to change the world.”