The Future of the 49ers 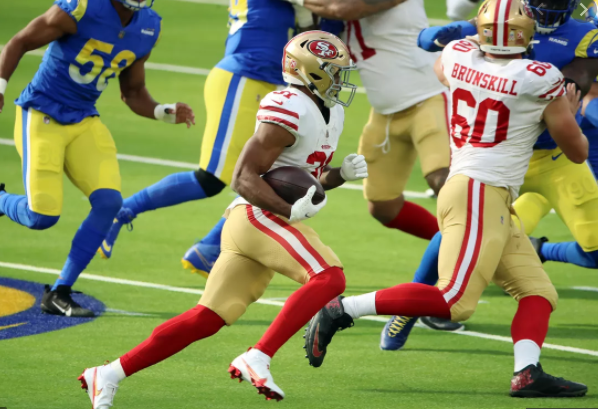 49er running back Raheem Mostert charges ahead against the L.A. Rams, a divisional rival.

The San Francisco 49ers have been riddled with injuries, and in a very crowded NFC West, the team has suffered and paid the price for their absent players.

At a record of four wins and six losses, the 49ers stand at the very bottom of their division. However, they continue to fight for a wildcard spot in the playoffs. Fans of the 49ers remain hopeful for the team’s future despite the injuries of their star players, including Nick Bosa, George Kittle, and Jimmy Garoppolo. Fans have had to put their faith in head coach Kyle Shanahan and the coaching staff due to the absence of these players.

Serra High School sophomore and lifelong 49ers fan Carson Baldi spoke on his current confidence in the team. “I am not worried because I believe we can overcome injuries, and although it will be a tough journey, I trust in Shanahan,” Baldi said.

Although the 49ers organization and coaching staff has proved to be one of the best in the league, it will be tough to make the playoffs this season. The Seahawks (7-3), Cardinals (6-5), and Rams (7-4) all above the Niners, who sit at a lowly 5-6. In almost any other division, the team would have a good chance at the playoffs being 5-6. Unfortunately, the NFC West is the toughest in the league.

Woodside sophomore Benny Bogyo voiced his concern. “It is going to be very hard to make the playoffs considering the strength of our division and the fact that we have to depend on second-string players at many positions,” he said.

As far as the long-term outcome goes, the Niners have many problems to address and deal with. They need to focus on resigning their players while targeting free agents to fill the team’s holes and relieve some pressure from the star players. Cornerback Richard Sherman, fullback Kyle Juszczyk, and tight-end George Kittle are just some of the players who will be free agents in 2021.

“I am worried about staying under the salary cap, because we have to balance our budget while extending a lot of our key players and leaders,” Jayden Webber, Serra High School sophomore, expressed.

Under the NFL’s salary cap, the organization can only spend a limited amount of their money on personnel.

“Staying under the salary cap may prove to be a struggle for our organization because our star-studded roster comes with a price,” Baldi explained.

Another essential piece to the future of every NFL team is the draft. The NFL draft is where teams select young players to start their professional careers and become a part of their organization. Football is a very physically demanding sport, so drafting hard-working, healthy players is very important in the outcome of the team. The youth is the future of the sport. Each team wishes to draft a player with potential and energy because each player affects the entire organization’s culture and reputation.

“We need to draft well in the 2021 draft because I… believe that those players can give our team a much-needed spark,” Baldi said.

It is evident that the 49ers are struggling, and a large part of it is due to injury, but what can the team improve on?

“I think we should target a young, preferably mobile quarterback in the upcoming draft,” Bogyo explained.

Jimmy Garoppolo has had his issues, and he has lacked accuracy and consistency. Garoppolo is hurt right now, and maybe we can attribute his on the field struggles to minor injuries and pain in his body.

According to head coach Shanahan, “I expect Jimmy to be our starter next year.”

Garoppolo’s six games played this season. He has a 67% completion percentage, just seven touchdowns, and five interceptions. Some fans have different thoughts on Garoppolo’s recent struggles and his future with the 49ers.

“I think it is time to move off of Jimmy G and look for a new quarterback,” Webber argued.

Although the 49ers are battling injuries and face many challenges in the foreseeable future, they are still the San Francisco 49ers. The organization has been at the top of the league for many years and will continue to be in head coach Shanahan’s and general manager John Lynch’s hands. Many fans will continue to be faithful to the 49ers through their struggles and always remain loyal to the Bay.

“I will always watch the [49ers] no matter what they are going through because they are my team, and I have great pride in being a Niners fan,” Bogyo stated.