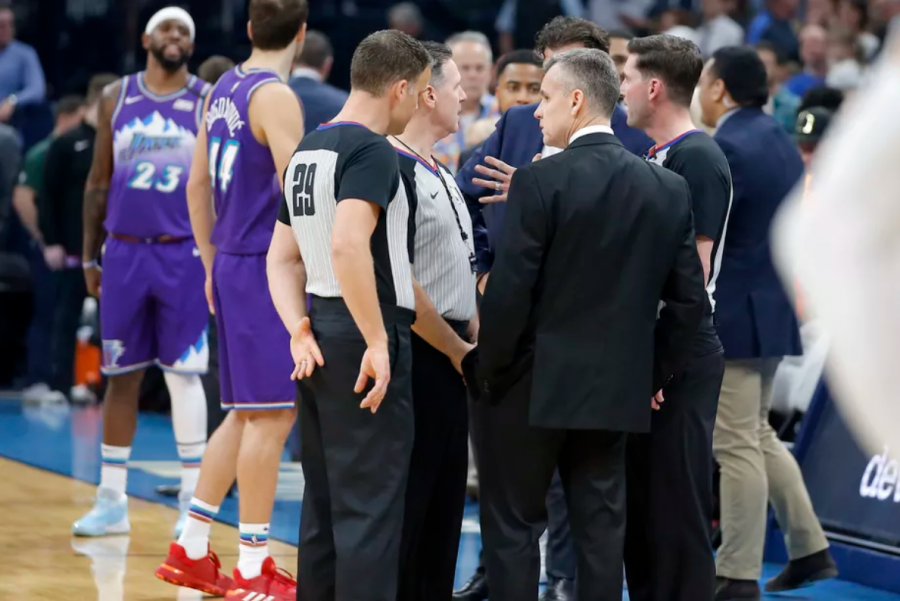 Oklahoma City coach Billy Donovan meets with officials before an NBA basketball game against the Utah Jazz was postponed.

It all started on Wednesday, March 11 in Oklahoma City. The Utah Jazz were about to tip-off versus the Oklahoma City Thunder, when, suddenly, National Basketball Association (NBA) officials ran onto the court and stopped the game.

For minutes, thousands inside the arena and millions at home were left clueless and confused. As more information came out, NBA insider Shams Charania announced a shocking revelation.

“The NBA has canceled its season,” Charania tweeted.

Millions stared at their screen in disbelief: the second-largest sporting league in America just canceled their season in seconds. It was only a short time later that it was revealed that Jazz center Rudy Gobert had the rare strain of coronavirus (COVID-19). As soon as this was discovered, the arena was evacuated, both teams were quarantined, and the season suspended.

Throughout a short period, what seemed to be some mundane Wednesday night in Oklahoma became a national crisis.

“That day was surreal,” podcaster Dan Katz said on his show, Pardon My Take. “We went from the president’s speech to the NBA season being canceled within ten minutes.”

While the sports world stood still in shock, time marched on.

Thursday, March 12 arrived, and the aftershocks of the NBA’s landmark decision were felt immediately: the Professional Golfers’ Association canceled the players’ championship and all other events, including The Masters. The National Hockey League was next, suspending its season until it is safe to continue. Then, Major League Baseball pushed their season-openers back a month to when they hope it will be safe to play.

The largest event in March followed the trend. The National Collegiate Athletic Association (NCAA) canceled March Madness, or the NCAA tournament, as well as all spring sports.

The XFL was the last domino to fall. They canceled their inaugural season, but they hope to return in 2021 for a second season.

“It was almost like living in a simulation,” Woodside junior John Buckley said. “Every sports league canceled their season, just domino after domino… it was insane.”