On February 2, 2020, the San Francisco 49ers faced the Kansas City Chiefs in a battle for NFL supremacy. 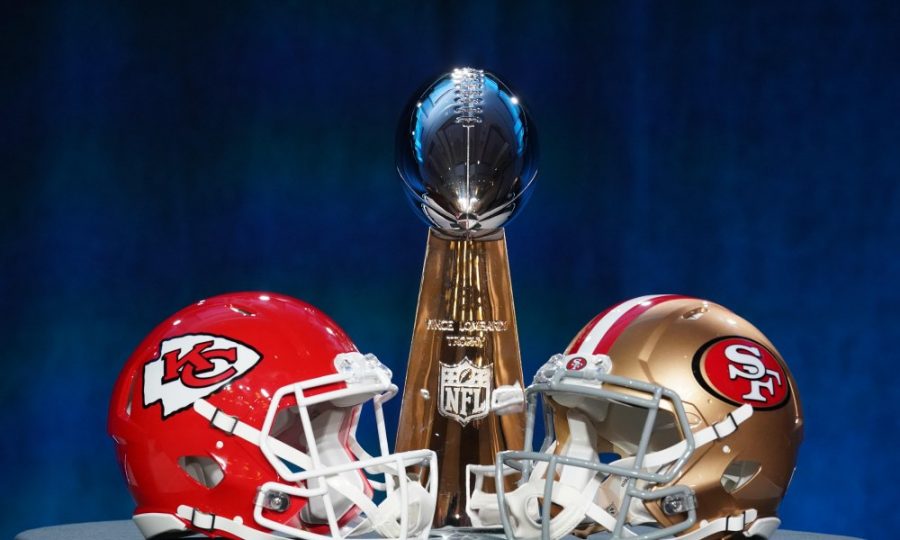 The two teams' helmets line up with the Lombardi Trophy in the background.

After two weeks of anticipation from fans, Super Bowl 54 was finally here. Two of the best teams in the National Football League squared off to determine who would be the world champions.

Sixty-two thousand fans packed into Miami’s Hard Rock Stadium, while a hundred million people turned on their televisions to watch the San Francisco 49ers versus the Kansas City Chiefs.

At 3:15 Pacific Standard Time, the team captains walked out to midfield for the coin toss. After San Francisco chose to defer, the game was finally ready for kick-off.

“I was really excited for kickoff,” Woodside junior and Chiefs fan Joshua Corrales said. “This was the farthest I’ve ever seen them go in the playoffs, so I couldn’t wait.”

The ball was kicked off by 49ers kicker Robbie Gould for a touchback. The Chiefs’ offense walked onto the field ready to face the fearsome 49ers defense. The Chiefs, whose offense is usually high-powered, struggled early. Star quarterback Patrick Mahomes missed some easy throws and just like that, they were punting.

A near-disaster punt return by Richie James set the 49ers up in bad field position, but the 49ers’ offense was off to a hot start. Thanks to a 32-yard run by Deebo Samuel, the 49ers were in the red zone but had to settle for a field goal. Gould’s field goal was good, putting the 49ers in the lead 3-0.

“I was feeling pretty good,” Woodside junior and 49er fan Alton Sands commented. “[The 49ers] came out fast, and I thought they could run away with the win.”

Another touchback would give the Chiefs the ball back. They would dink and dunk their way down the field. Setting them up for a 1-yard Mahomes touchdown run and after Harrison Butker’s extra point, the Chiefs took the lead 7-3.

49er quarterback Jimmy Garoppolo led his team back onto the field for their chance to continue their offensive success. After a quick strike to Emmanuel Sanders for 18 yards, the 49ers looked like they were going to continue moving the ball at will.

“Garoppolo is able to stay upright… And Breeland is there for Kansas City; it’s intercepted,” Fox commentator Joe Buck exclaimed.

The ball was back in Kansas City’s hands, and Mahomes would find Sammy Watkins for 28 yards, putting them back in scoring range. The 49ers played great bend but don’t break defense and held the Chiefs to a field goal attempt. The kick from 31 yards out was good, extending the Chiefs lead to 10-3.

After the Garoppolo interception, the offense would look to rebound— and rebound they did. The passing game picked up yards like they were flowers, and they were building a bouquet. This drive would end with a Kyle Juszczyk touchdown reception. A Gould point after would tie the game at 10-10.

Mahomes led his offense down the field as well, but after a bad run, the drive stalled. They gave the 49ers the ball with under a minute left until halftime.

It appeared at first the 49ers intended to run the clock out and send it to half time tied. Then, after a Kansas City timeout, Garoppolo threw for 20 yards over the middle. Now they needed more yards to be in scoring range and had wasted 40 seconds.

With 14 seconds left, Garoppolo floated a beautiful pass to George Kittle who caught it at the 13-yard line and got out of bounds with six seconds left, almost assuring points for the 49ers. But the play would not stand as the back judge referee called  Kittle for pass interference.

“I didn’t love that call,” Sands recalled. “I didn’t think it was pass interference at all, but that’s what they called.”

The 49ers, instead of taking a deep shot, just kneeled it out, taking the game into halftime with both teams tied at ten points apiece.

“That last drive of the first half was really bad,” Woodside’s football coach Justin Andrews said. “It was confusing from start to finish.”

The 49ers received the second-half kickoff and got back to work on offense. The team was finally starting to click; they moved the ball down the field with efficiency. The drive ended in a field goal, making the score 13-10, with the 49ers in the lead.

Kansas City now had their chance to respond, and they picked up right where they left off. Mahomes found Sammy Watkins for a couple of big plays, but after a Nick Bosa sack, the Chiefs faced a tough third down.

Now the 49ers were poised to extend their lead. All it took were some quick plays, and the 49ers were in the endzone one more time. Gould drilled the point after giving the 49ers a ten-point lead 20-10, with 15 minutes remaining.

Mahomes led his offense back onto the field, down ten points, looking to cut the 49ers’ lead down to only one score. Everything looked good for the Chiefs. They drove their way into 49ers’ territory primed to score, then with 12 minutes left, disaster struck.

“Mahomes’ pass behind, tipped… and picked off by the 49ers,” Buck called.

The 49ers were in prime position to win: they had the ball, the lead, and time to kill. The 49ers’ drive stalled, and they could not extend their lead. However, they killed three minutes off the clock. They punted the ball to the Chiefs with nine minutes remaining.

The Chiefs needed a score. If they were to be stopped and get no points, that would end the game. Things were not looking good: Mahomes threw several incompletions and because of that, they faced a long third down.

“[The Chiefs] are going to need some Mahomes magic,” Buck said. “Launches down the middle [Tyreek] Hill open and caught.”

Now with six minutes remaining the Chiefs were in scoring position. Then after a lob pass forced a defensive pass interference against the 49ers, and the Chiefs scored a touchdown from the one-yard line. Butker’s kick was good, and the Chiefs cut the lead to three points, 20-17.

After a very quick three and out for the 49ers, they had to punt the ball back to the Chiefs. It was do or die time for both teams.

“I had a good feeling about that drive,” Corrales said. “I was extremely nervous, but I had a gut feeling like this was our chance.”

A quick drive by the Chiefs then ensued, only taking up two minutes, and resulted in a Chiefs’ touchdown. Down ten points just 12 minutes ago, the Chiefs had come back and taken a four-point lead with two minutes and 45 seconds left, 24-20.

It was time for Garoppolo to earn his contract. It looked good to start, early-down completions for quite a few yards. After Garoppolo missed a wide-open Sanders for a potential game-winning touchdown, the 49ers needed ten yards to keep their Super Bowl hopes alive.

“Pressure coming, blitz send, Garoppolo steps up and he goes down,” Buck said.

That was it. With only one and a half minutes remaining, the 49ers gave the ball back to the Chiefs. With hopes of victory nearly squashed, the 49ers might have had a chance if they could stop them.

They could not. Damien Williams made one cut and ran 38 yards for a game-sealing touchdown. The Chiefs sealed the game 31-20, the final score.

“I was running and screaming through my house,” Corrales said. “I was literally jumping with joy.”

“That play was a gut punch,” Sands recalled. “I thought we might have had a chance, but that one killed my hopes and it hurt.”

Despite the painful loss, 49er fans are optimistic their team will make another run at a Super Bowl title.

Andrews shares the same view for both teams and thinks this may not be the last meeting these two teams have in the big game.

“These are two really good and young teams,” Andrews said. “I think it’s a high possibility that we could see a rematch next year.”