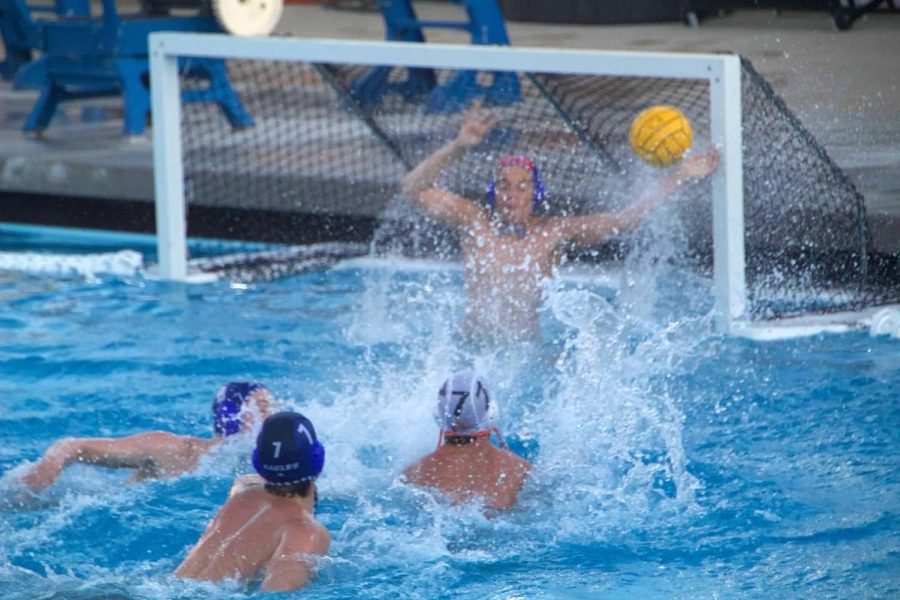 Woodside blocks their opposing team, Menlo-Atherton, from scoring a goal.

The team played MA on September 23, with Woodside winning eight to seven. This surprising win keeps the varsity team undefeated in league games so far this season.

“Winning against MA was amazing,” Duncan Vaughan, Woodside’s water polo captain, said. “There is not really any other way to describe it. MA has trash-talked Woodside water polo for all my four years, and I’m sure for longer. After we won, we were all cheering, and the entire MA team was silent.”

The Woodside team was not expecting this win as they prepared for the game.

“Initially the goal of the first game was not to beat them, but rather [to] close the gap a bit because, in past years, we have lost by a lot,” Dominic Constantz, Woodside’s second water polo captain, explained.

The team started the game with a strong lead against MA.

“In the first quarter, we had a three-zero lead,” Ryan Mills, a sophomore on the team, said. “We had a slight decline in the second half.”

One factor that helped Woodside players was how many of the Woodside students play on club teams with the MA players.

“Knowing them from club teams is pretty helpful,” Vaughan stated. “I know their attitudes, how they think, and how they play.”

The two teams will face each other again on Thursday, October 17.

“The next time we play against MA will be an away game, so they will have home advantage,” Constantz explained. “I anticipate it will be a close game, but hopefully we win.”