Woodside High School's track team is in their final stretch. 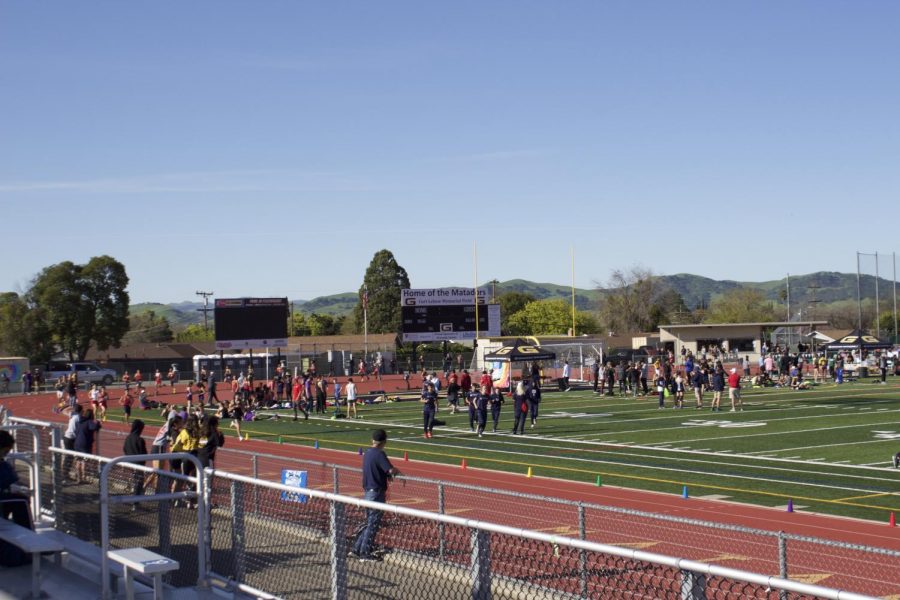 As the Woodside High School track season is coming to an end, the school celebrated its seniors’ last Wednesday with a night dedicated to them, while runners and jumpers are heading off to the Pacific Athletic League (PAL) championship and varsity trials.

The track team has a strong varsity team that will be competing in the PAL trials. With a whopping fifty-six kids on the track team, every event had strong athletes fighting to win a spot on the varsity team. If the were to team does well in the trials they will compete in PAL championships which could lead to Central Coast Sections (CCS) and others.

“For the first half of the season I was on junior varsity (JV) and then I was moved up to varsity,” Eloise Sampson, freshman varsity distance runner, shared. “I was happy that I was moved up but it came with a lot of added pressure.”

Many athletes hope to get onto the varsity team by trying their 100 percent hardest at practices. Practices contain athletes doing drills to help them prepare for the different field events by running distance to jumping and practicing the field events. All the student athletes push to bet their personal record (PR).

“Practice was really intense, especially for the distance runners,” Sampson said. “We ran a total of forty-six miles per week.”

With a total of six different groups and over 30 different events, practices got a little chaotic, but the coaches worked hard with all of the athletes and the team came out on top in a majority of the meets they attended.

“The coaches are really supportive and the coaches push me harder than I have ever worked before, which is hard to find in a coach,” Trinity Slack, freshman JV hurdler, explained.

There are many reasons as to why students sign up for track and field, and the coaches are one of them. The track and field coaches help Woodside’s student athletes learn and improve in all areas of the track. They also support the students by making the runners, jumpers, and throwers form a community where they can all come together and help each other perform the best they can be.

“I have been jumping for Woodside since I was a freshman,” Nino Montalbano, senior varsity jumper, explained, “Every year new jumpers sign up for track and they improve over the course of the season.”

Montalbano, like many of Woodside’s seniors, was honored on Wednesday, April 10, after the last home meet of the season. Although Woodside did not sweep in every event, the JV boys were victorious. The last event of the night, the 4X400 boys varsity relay, honored the seniors as well, showcasing the Woodside senior sprinters.

“As a freshman it was fun to see all of the seniors being honored,” Erika Rolfhes, freshman varsity jumper, stated. “[The seniors] work really hard and it is nice for them to be recognized during their final year.”

“I am proud [of] the track team as a whole, over this season the athletes all collaborated well with each other by improving their skills and communication as a team,” Coach Al Hernandez, head distance coach, shared. “I enjoy watching our students grow and that’s what they did over this season.