Colin Kaepernick signed with Nike after not getting re-signed to an NFL team, following the 2017 controversy beginning with him kneeling during the national anthem to protest the oppression of people of color. In the recent debut of the Nike campaign video showcasing athletes with obstacles, Kaepernick says, “Believe in something even if it means sacrificing everything.”

The kneeling protests have continued into the 2018 NFL season with two Miami Dolphins taking a knee during the first football Sunday of the season, keeping the protest in the spotlight. Nike is also keeping the protests alive with their selection of Kaepernick as their spokesperson of the campaign.

“Nike is making a statement. They could have picked anyone but they chose Colin Kaepernick,” Trevor Cook, senior football player, said. “Nike probably knew that they were going to get backlash for that, so I feel like there is a reason for picking Colin Kaepernick.”

Nike’s assumption was correct. Some football fans took offense to Nike’s decision because of their opposition to Kaepernick’s form of protest, which they deemed disrespectful.

Opponents of Nike’s controversial decision have gone so far to burn their Nike belongings and Kaepernick jerseys. Not only did Nike apparel literally go up in flames, but it seemed that the stock value was on the verge of burning up, as well.

The day after Kaepernick’s announcement via Twitter that he would be included in Nike’s new campaign, Nike initially took a 3.2 percent hit in their stock value. However, the day after the stock price fell, the campaign video was released, stunning all those who saw it with its emotional display of marginalized athletes, and Nike shares rebounded up 3.6 percent to erase all the initial losses, and then some.

“I’m proud to wear Nike considering that they took that stand, and I know they are losing a lot of money,” Scott Morimoto, senior football player, said. “I’m proud to wear a Nike jersey because they’re standing for something that’s right.”

The varsity Woodside football team switched back to to their original Nike jerseys instead of the new riddell jerseys, handing them off the the junior varsity team— not for political reasons,  but because they preferred the aesthetic. Still, politics has made its way to the Bradley Field. Last football season, Kaepernick’s single protest not only inspired kneeling during the anthem across NFL teams, college football teams, other sports teams, and high school football, but it transpired within Woodside’s football team. 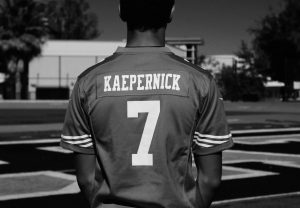 “I would first question what their main purpose of it is, and make sure that before they go out and do this protest that they have everything straight like facts,” Isaiah Henderson, senior football player, expressed. “If one of my teammates wanted to start a protest, I’m going to get behind them, and I’m going to make sure that he has people that he could rely on.”

The NFL denounced its new policy in July 2018 after its publication two months prior, leaving teammates with the same protocol as they had during the time of Kaepernick’s protests. For NFL players who want to continue kneeling, this is good news, as the new policy stated an option for protesting players to stay in the locker room for the national anthem— but all players on the field were required to stand. Individual teams would be fined under the policy currently on hold for any players who refused to meet the requirements.

As for Woodside, no current policy stands for athlete protests but a coach-by-coach decision process.

“We had some players doing that [kneeling] last year, and I fully supported it,” Woodside Varsity Head football coach, Justin Andrews, said. “A few of our players, during the national anthem, respectfully took a knee. It wasn’t in a way to draw attention to themselves, and I saw it as them just showing solidarity to the issue, to Kaepernick.”

Silent protests are just one form of how people can express their First Amendment rights, and with their high platforms to do so, many NFL players who kneeled with Kaepernick were angered by the outcome and new policy proposition. The First Amendment protects an individual’s right to freely speak, peacefully assemble, and petition the government for a redress.

“I think it’s really important for people to voice what they believe in,” Morimoto said, “even though it may not go with the social norm. But if you have an opinion and you have a belief, you should be able to voice that because that’s just basic human rights.”