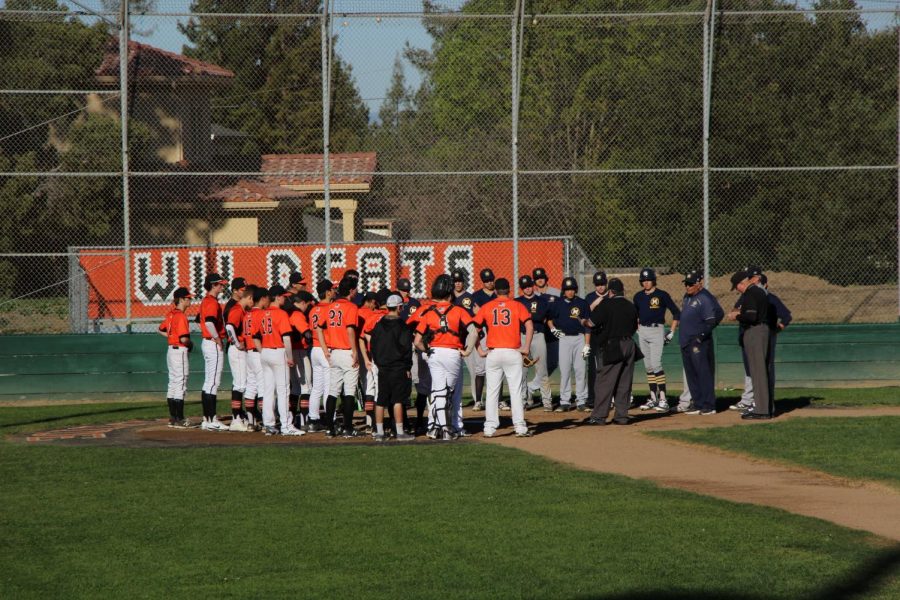 The Woodside High School baseball team has been successful so far this season with a winning record through fifteen games.

After winning five straight league and non league games in a row, the Wildcats dropped their latest matchup with Menlo-Atherton on April 3rd by a tight score of 5-4. So far this season the Wildcats post a record of ten wins and five losses, with key victories coming against Sequoia, Menlo, and Pioneer. Despite losing several seniors last season, this year’s team is once again dominated by upperclassmen with ten seniors and ten juniors making up the roster.

“Everyone is very close friends, so we have great chemistry,” Senior standout, Cole Gabrielson says. “It is nice having only juniors and seniors because everyone on the team has become better baseball players during their time playing for Woodside, and we all know what needs to be done in order to achieve our goal, championships.”

The ballplayers’ chemistry is proven through their goal of team success.

“We have been playing much better, with more unity. Our drive to win is a lot stronger and we’re playing all aspects of the game better,” commented Senior Captain, Cameron Vaughan.  “We’re motivated by the fact that we really do have a shot to go to CCS, and we really want to achieve that this year.”

In order to make the CCS playoffs, the Wildcats are forced to be successful in both non-league and league games by posting at least an even record in these games.

“Our coach definitely made our schedule one that will challenge us and force us to play baseball games that will prepare us for CCS playoffs, but we have been handling some of the tough non league games very well,” Gabrielson added.  “League games are the same, good teams but if we just play the way we’ve been playing all season we should have no problems in our league.”

Coach Tim Faulkner is head of the team, who the players enjoy playing for and attribute much of their success to.

“Our coaches really take a hands off approach and let us play. Obviously they coach us, but we all have a good idea of what we need to do and when we need to do it and the coaches are there to help us realize those opportunities,” Vaughan stated.

With the advisement of their coaches, the Wildcats are excited about their season’s success and are hoping to make a run into playoffs.

“Our goal since the beginning of the season is to make CCS and not go down without a fight. By the looks of it, if we keep playing the way we have been playing, we believe that we will have no problem doing that,” Gabrielson declared. “We want a championship this year to bring back to Woodside and put us back on the map, and we aren’t going to stop working until we reach that goal.”