Despite losses, JV fights on 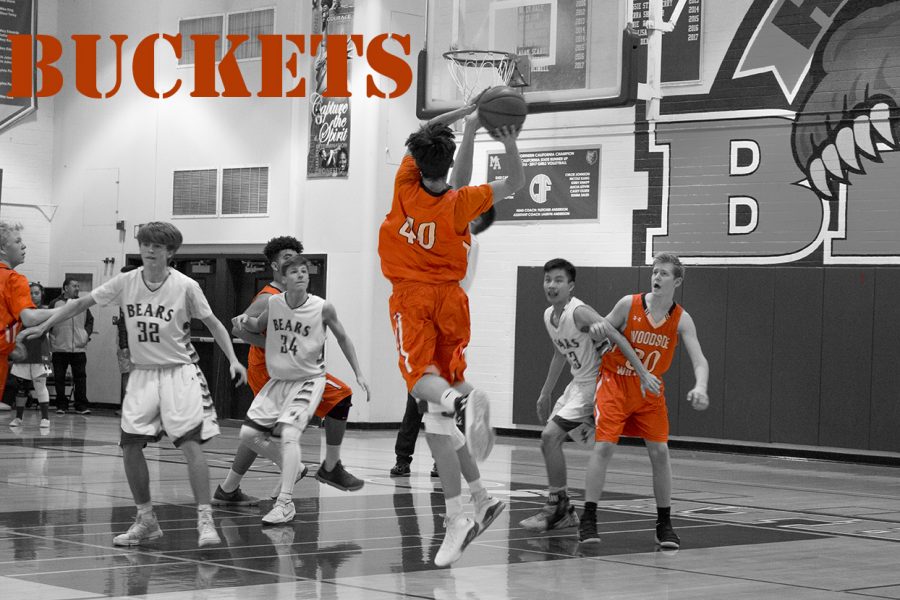 Small Forward Nolan Irion pulling up for a jump shot against the MA Bears.

The Woodside Boy’s JV team have been working hard this season in preparation for the quad away game versus the Sequoia Cherokees on Friday, February 2nd.

The JV team this year consists of only sophomores and freshmen, unlike the 2016-2017 team that saw a diversity of players ranging from freshman to junior year. Only one player this year is a returner on the team- sophomore point guard and team captain Gavin Carlson.

“Being a captain on JV is an honor,” shares Carlson. “Even though it is only JV high school basketball, something about being looked upon as a leader and main contributor is motivating. The responsibility reminds me to work hard every single day I can.”

Carlson asserts that the main contributors are “in terms of scoring, Dylan Barnwell and Julian Goldberg… Deandre Brown controls the paint grabbing rebounds, while Chris dodges and I control and manage the team while on the court.”

“We have a really good team chemistry,” says Luis Gonzalez, sophomore small forward on the team. “We are mostly sophomores and like 3 freshman so it’s very easy to relate with each other.”

The JV team is currently 6-7 overall and 0-4 in league. Their significant victories are against South San Francisco (66-42), Mountain View (32-30), and Harker (49-31). Carlson commented that it is “frustrating to see the team lose,” when asked about their record.

Carlson missed several games, including the Sequoia quad game with a hand injury. Also, he injured his left foot and was out for the MA quad away game.

When asked about his injury, he said, “injuries are tough. Almost every single guy on the team has struggled with some sort of injury at one point in the season. The hardest part about injuries for me has to be the fact that you can’t fight for your teammates. You work so hard, so not being able to contribute is really disappointing.”

The team has won none of the 3 quad games played so far against Carlmont, Menlo-Atherton, and Woodside’s biggest rival Sequoia.

Rovi Paule, sophomore point and shooting guard says he feels “very unhappy that we have lost all of our quad games…the JV team will catch on, because we are very talented that is a threat to everyone.”

During quad games, it is always a close game up until the 2nd half when the team begins to trail behind its opponent, falling almost 20 points behind at times.

”The main issue is the fact that the games haven’t been close,” Carlson says. “That being said, our team has a great opportunity to respond against Sequoia this Friday… Our effort will certainly improve, and some changes have already been made.”

Despite these defeats, the JV team continue to work hard for the remaining quad games against Carlmont (away), MA (Home), and Sequoia (away) for a rematch.

Rovi believes that the team’s “biggest grudge is communication and at the next quad game I feel like Woodside can take it, because Woodside is the most talented team in our league.”