Awards Given Out to Athletes 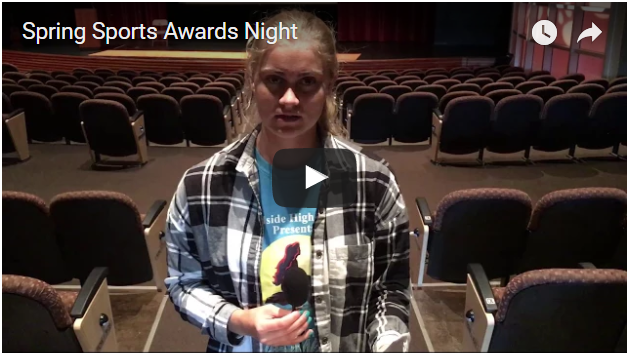 Hundreds of teens gathered in the PAC, sitting shoulder to shoulder with their teammates and classmates, in order to hear who got the many awards for each of the multiple spring sports.

On April 19th the annual spring awards ceremony was held in the Performing Arts Center. Athletes from baseball, softball, swimming, track and field, and many other sports were seated to hear who got the many awards from each of their sports, like MVP, coaches award, most improved, among others. Mckenna Shade and Nathan Cai both got MVP for JV swimming. Kaia Anderson and Trevor Collet were awarded MVP for varsity swimming. Brendan Butterworth was voted the MVP for JV boys lacrosse while James Lewis got it for varsity boys lacrosse. Kaitlin Raynor got MVP Attack and Kassandra Barrientos got MVP defender for girls lacrosse. Max Moreno won MVP for JV baseball while Joseph King was voted MVP of varsity baseball by his teammates. Devon Sheehan was voted MVP for JV softball and Paige Blackwell was voted MVP for varsity softball. Amanda Wong and Anthony Baldini were both named MVP for badminton. Claudia Kister won MVP for JV cheerleading. Danielle Daniels was voted the MVP of varsity cheerleading. Carson Katz got awarded the MVP of golf. Sarah Perry and Nathan Bowman were both awarded MVP for freshman/sophomore track and field while Christian Canellos and Whitney Elsie Suelflohn got MVP for varsity track and field. The recipients all were shocked and proud that they got awarded MVP for their sports.

The athletes know that they deserved their award based on their skill, talent, dedication, and hard work.

“I do think I deserved it, or else my team wouldn’t have voted for me,” JV softball MVP, sophomore Devon Sheehan said. “I worked very hard this season, as did everyone else. I put all the effort I had into each game, and I guess my performance reflected that. I am very proud of how I did this season. I never made a single error, I led the team in RBIs, and did a solid pitching job. While there’s always room for me to improve, I do feel like all the hard work I put in showed.”

The awarded athletes are not only proud of themselves, but their team as well, knowing that they wouldn’t be where they are without them.

“I am very proud of my team this year,” Blackwell reflected. “We grew up a lot and learned a lot about ourselves. Though we didn’t have the most successful season, we played with heart and that shows a lot about who we are.”

The hard work of the teams showed through in their records in some cases.

“Overall, I think our team did pretty good,” Sheehan said. “A 9-10 record isn’t amazing, but it’s nothing to be ashamed of. Our losses were all close: we never gave up and fought all the way to the end. We had a lot of really talented players on our team, and it showed.”

Despite how well their teams have performed throughout the season, the awarded athletes know that they deserved the title of MVP.

“While everyone on our team worked hard and it is a great team effort, I feel honored I was given this award,” Girls varsity swimming MVP, Kaia Anderson, said. “I am grateful to win MVP because I know how much hard work I put into my training to reach my goals.”

The many athletes were thrilled that they won and to know that their fellow teammates voted for them adds to their excitement.

“Winning MVP is such an honor and it means even more to me that my teammates voted for me,” Sheehan said. “Knowing all my hard work this season paid off and being recognized for my abilities means the world to me.”

Some players were shocked to know that they were awarded MVP of their team, others, however, weren’t shocked at all, knowing that they deserved it.

Due to their being so many players in every sport, it is very difficult for coaches to chose an MVP, and the athletes know this. Anderson was particularly proud of herself due to the immense amount of people on her team.

“I think it’s always difficult to determine an MVP when everyone on the team plays an important part,” Anderson said. “We have so many valuable swimmers on our team, but I was grateful to be acknowledged and to receive the award. It inspires me to continue to train and to work hard.”

While the season has come to a close, many of the athletes will continue to work on their skills throughout the rest of the year. The recipients and non recipients of, not just the MVP award, but many others, are proud of themselves, their teammates, and their team. It was a very successful season for the spring sports.

“I am very proud of how the team did this season,” Sheehan said. “We played well in every single game, sometimes winning and sometimes losing by only a run or two. All of the hours we put in during practice definitely showed. Not only did I get to play with all these talented girls, but I also made a new family.”