What To Expect From This Season: Girls Water Polo 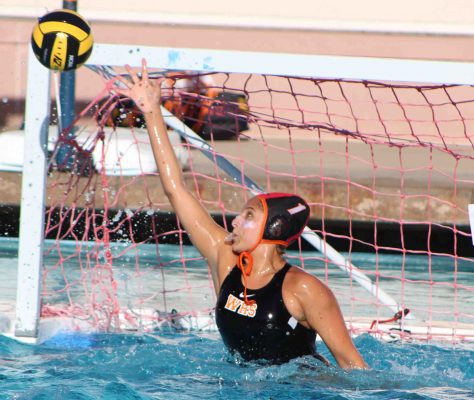 Head coach for the girls water polo team, Laura Reynolds and her players discussed  how they thinks this season will go.

“We lost some keys seniors, but we have a strong team,”  stated Reynolds “We take the season a game at a time, continuing to improve both individual and team skills throughout the season so that we are better at the end of the season than we were at the beginning.”

Reynolds also explained her cut process and what its takes to stay on the team. She believes that your main focus should be keeping your grades up and giving your all to the game.

“I usually don’t cut; however, I have removed players from the team for missing practices and for bad attitudes. Basically, you need to be able to make a commitment to being at every practice without excuse. I have no problem removing a player from the team even at the end of the season.”

Her advice regarding the sport was to ask questions if you feel like you need help with something, if she’s not available ask the team captains.

“..if you don’t understand something, asknot while I’m coaching the game, but afterwards.”

Team captain for Girls Varsity, Mina Sealund, has a positive outlook for this season and hopes varsity will make to CCS this year.

“After losing seniors last year we are rebuilding and every game and practice we are getting stronger and faster. I’m hoping we will make it to CCS for the third year in a row, I believe we can do it.”

The captains perspective for this years team compared to last years is that it’s going to be an amazing season this year with her new team.

“Last year we had some drama that affected play but this year everyone is very positive..it’s going to be a great season.”

The captain’s advice for her team is to play hard, do your best, and keep your eyes on the prize: a CCS Championship.

“Some advice for JV is, you have amazing coaches so absorb all the information they’re giving you and learn the rules of the game. Practice hard, play hard, and just have fun.”

Mina’s view on fans, supporters of the game, and Woodside’s team is something her coach would say to the rest of the team, “Players play, coaches coach, and fans cheer”.