The Growth of CryptoCurrency in America

What is leading to nationwide growth of Bitcoin? 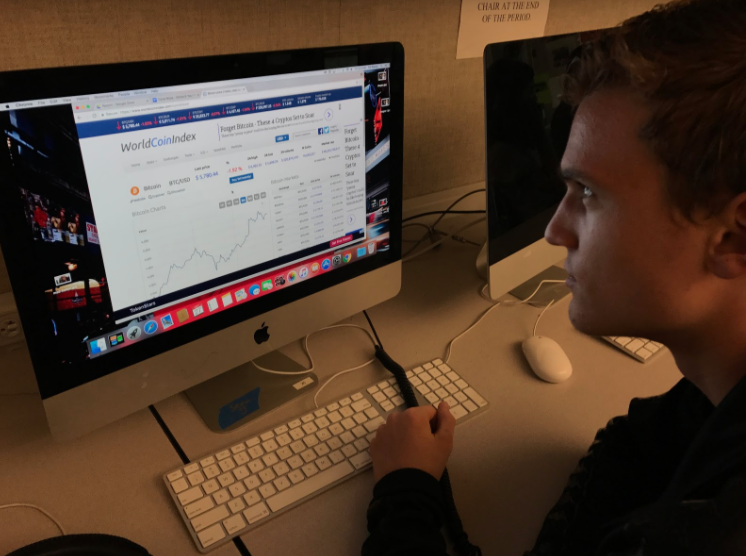 The swift rise of a digital currency known as Bitcoin and its 1000% price increase in the last year is grabbing the attention of Bay Area students and entrepreneurs alike.

Bitcoin is a form of cryptocurrency, the only decentralized currency in America.  This type of money is entirely virtual and created from code; so the prices come directly from speculation. C When a currency is decentralized, there is no bank or government interference, meaning unlimited economic freedom without question.

While the low-interference may seem like a commodity, all payments with Bitcoin remain anonymous and untraceable. There is no purchase protection, so risks of scams remain prevalent.

In 2009, Bitcoin started as an open source web project by a group of anonymous developers, where computer GPU systems could “mine” for bitcoin by solving advanced algorithms in return for the cryptocurrency as a reward if completed correctly. At the time, Bitcoin was a first generation currency so the value remained low for the first two years.  From 2009-2012, Bitcoin grew in popularity as people began exchanging them for tangible goods.There is a finite supply of 21 million Bitcoins in circulation; so scarcity remains a factor. Every year, the amount of Bitcoin that can be mined cuts in half.

To obtain a Bitcoin without “mining” they can be purchased online and added to a virtual “wallet”. The most respected and used wallet for holding Bitcoin is Coinbase, which began in the Bay Area  in 2012 shortly after the price of one coin broke $1000.

Throughout Silicon Valley, entrepreneurs are willing to take the risk on Bitcoin, which can be seen as a high risk high reward investment. Jason Allen, a self-storage owner from Palo Alto, began dumping profits into cryptocurrency two years ago. He believes that the price has potential to reach $10,000 by 2018.

“I think they’re comparable to many of the appreciating penny stocks on the Stock Exchange,” Allen said. “When it surpassed the value of gold, I realized how profitable this could be. But people shouldn’t invest anything with hope of a return. Investment money is the same as throw away money.”

The rapid appreciation of Bitcoin has caused many to question whether or not the currency is in a “bubble”, with chance of a swift downfall. Jamie Dimon, the C.E.O. of J.P. Morgan, has repeatedly called Bitcoin a “fraud created by greedy individuals.” However, Bill Gates has a different perception of the currency, and has referred to it as “the future in many ways.”

At Woodside High School, students remain eager about the idea of a new currency such as Bitcoin. Chet MacArthur is a senior who purchased Bitcoin months ago because it was a trending topic on social media platforms such as Twitter.

“I don’t see the price dropping soon because so many people use it everyday on the deep web and stuff like that,” MacArthur commented. “From what I’ve seen it’s high risk and reward; so I’m automatically interested. .”

Other countries have reacted more harshly to cryptocurrency. In September this year, China banned Bitcoin in response to the volatile price.  This country has also banned apps such as Facebook and Twitter.

Across the world, Bitcoin is a controversial topic both as an investment and a legality issue. The rise of Bitcoin has opened numerous doors for the future of how money is dealt and valued.

“Bitcoin is still in its infancy, even after a 1000% price increase,” Jason Allen commented. “It will remain in infancy for at least another decade.”