Should We Be Worried?

The Inside Scoop Behind Kim Jong Un and North Korea 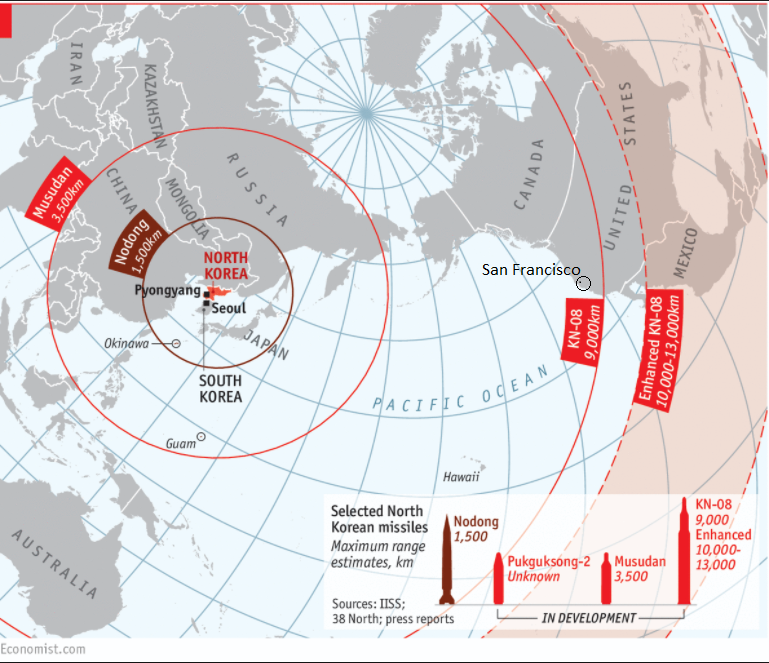 Rising tensions between the United States and North Korea have left many Bay Area citizens worried about a potential missile strike.

Although animosity has always been high, the standoff between the two nations began after North Korean leader Kim Jong Un conducted several missile tests in April of 2017. US President Donald Trump and the UN Security Council condemned North Korea’s actions after the missile test.

Kim then continued to conduct missile tests throughout the summer, leading to an aggressive war of words between Trump and Kim, culminating with the US President calling Kim “rocket man,” and Kim responding by labeling Trump as a “mentally deranged US dotard.”

Additionally, the fact that San Francisco is the closest major population center to North Korea (aside from Honolulu), and possibly the first American target for North Korea, makes many people nervous.

“I feel like, being the Silicon Valley and the center of technology… if [North Korea] wanted to strike somewhere on the West Coast, it would be us,” Woodside Sophomore Seth Reis states.

Woodside Junior Josh Rieber also believes that the Bay Area is in the firing range for North Korea.

“Their bombs can reach San Francisco according to them,” Rieber mentions.

Even though North Korea is significantly closer to California and the West Coast than New York and the Eastern Seaboard, some believe that Kim has other targets in mind rather than the Bay Area.

Kelsey Theriault, a Woodside government and economics teacher, does not believe that the US is in danger because North Korea has not said they will use nuclear weapons.

“What would actually make me concerned is if North Korea said, ‘That we plan to attack the United States with a nuclear weapon,’” Theriault states, “I would think, OK, maybe they’re serious.”

North Korea is a mere 650 miles away from Japan, compared to 5,450 miles away from the Bay Area, leaving Mark Reibstein, an AP English Language Teacher at Woodside and former resident of Japan worried for them.

Reibstein comments, “I worry for [the Japanese] as a people, as missiles get shot over… their waters and over Hokkaido.”

Despite tensions between North Korea and the US being at their highest in years, the odds of nuclear war actually happening does not seem very high.

“I would guess like a .01 percent chance [of there actually being fighting],” Theriault states.

Some think that nuclear war is likely to occur.

Reiber believes that there is “maybe a 30% chance [of a nuclear war].”

There also is no easy solution to lower the tension between the two nations.

“Every decision isn’t exactly a solution because… almost every way out is going to cause problems,”  Rieber muses. “If we attack first, then North Korea has the power to nuke South Korea and Japan… but if we don’t attack, then their program will just get stronger and we’ll be in higher risk.”

“I’d like to see… Trump impeached,” Reibstein comments. “I don’t think he’s fit for the job, and this is where the consequences are most dire.”

The North Korean Missile situation may seem precarious, but Theriault believes that Kim will not attack with a nuclear weapon.

“I think when somebody says we will use a nuclear weapon and we plan to,” Theriault states, “then that would make me concerned.”