How the school, district, and state government are approaching the issue 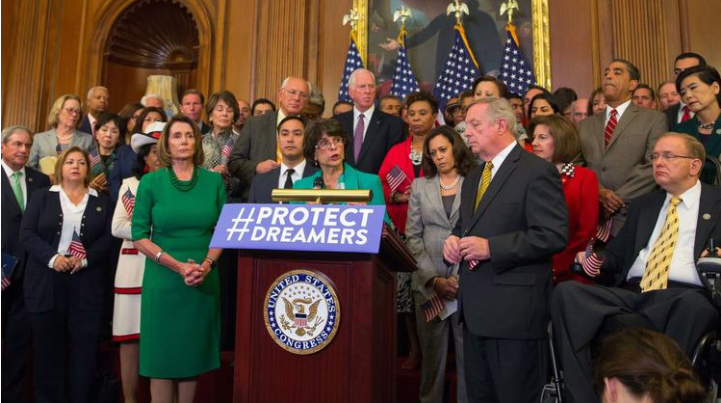 WOODSIDE, CA- President Donald Trump’s decision on September 5th to issue an end-date for the Deferred Action for Childhood Arrivals (DACA) program has caused an uproar in California, as officials in all levels of government race to condemn him.

Established by executive order under President Obama in 2012, DACA shielded undocumented immigrants who had been brought into the country as children from deportation and offered them work permits. Among those who took advantage of this opportunity were approximately 200,000 Californians, of which tens of thousands are estimated to live in the Bay Area.

Following the President’s unexpected announcement, giving congress six months to find a replacement for DACA, the California state legislature was quick to rebuke his decision, passing a resolution, HR-66, the following day. This resolution, which passed 57-1 on the Assembly Floor, explicitly condemned Trump’s order, citing DACA members’ contributions to society and the economy.

The measure “urges the President of the United States to stand by those who were brought as children to this country as the United States is the only country they know,” while voicing their support for a “comprehensive and workable approach to solving our nation’s historically broken immigration system.”

This strong opposition drew praise and support from both students and staff members at Woodside.

“The responses from the Californian government have been positive to keep [the DACA program],” Isabella Linez, junior and president of the Young Latino Leaders club told the Woodside World.

Just as at the state level, Trump’s actions have also drawn intense condemnation from the Sequoia Union High School District, which sent its families a letter on September 8th voicing its support for its DACA students.

In the letter, district superintendent Mary Streshly wrote, “I feel compelled to share with you my thoughts, and remind you that Sequoia district will remain a safe and inclusive place for all students, regardless of immigration status.”

Drawing parallels to California’s recent decision to become an official ‘sanctuary state,’ the district vowed noncompliance if the federal government were to ask them for any information.  To further comfort students who may be feeling less safe after the announcement, the superintendent went on to say that the district would use whatever legal means necessary to protect the identity of DACA students.

“In the case of personal information,” Streshly wrote, “we will not release records to the federal government unless forced to do so through a court order.”

The district’s actions have already had an effect, encouraging teachers at Woodside who had previously questioned whether the school system supported DACA students. Jenny Ortez, a history teacher at Woodside and an advisor to the newly-founded “Dreamers” club, shares students’ reactions to Trump’s decision.

“Some students are afraid,” she shares. “They don’t know if they [can] go back to their homes.”

Ortez is also a strong supporter of the actions the district has taken to show that it stands by all of its students.

“It was something that I had really not seen, not heard, from such a position of leadership,” Ortez admired. “That was special.”

But, as this issue looks set to put undocumented students in legal limbo for the next six months, some of their peers feel that more could be done.

Linez says, “[The Woodside High School administration] could definitely send out a letter or [offer] an outlet for undocumented students. [They need to] let it be known that they support us (Latino students).”