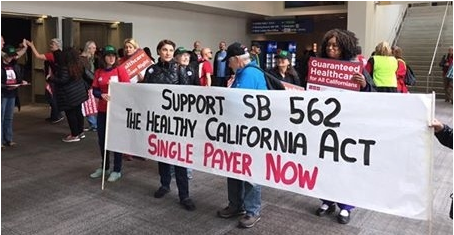 Healthcare is often a controversial issue, caught in the debate on the role of government in Americans’ day-to-day lives. Currently, the Trump Administration is occupied in the process of repealing the Affordable Care Act, which the previous Obama administration introduced. More recently, a healthcare bill was introduced in California, advocating for statewide single-payer Healthcare.

The Healthy California Bill, known as SB-562, has caused some controversy within the Golden State. First proposed in February 17, 2017, SB-562’s stated goal is to provide single-payer healthcare to all residents of California. A single-payer healthcare system is one in which, instead of using insurance companies as middlemen, citizens pay the government through increases in taxes, and the government in turn pays for their medical care.

Some have pointed out that the US already has a single-payer system in Medicare, which provides health insurance mainly to citizens who are age 65 and older. Medicare is free to all who have paid into the payroll tax once they reach the age of 65, and is widely considered a success.

“I enrolled in Medicare about a year ago,” said Gary Mulleneaux, 66, “and I haven’t regretted it since. It’s much less stressful – I’ve now got both hospital and medical insurance without having to worry.”

With the relative success of both Medicare and the Affordable Care Act, many people support the further expansion of healthcare to cover all.

“Medicare has provided guaranteed healthcare for millions of American seniors for more than 51 years,” The National Nurses United, the largest Union for registered nurses in the United States, states on their website. “It’s time we have a Medicare for all, single-payer healthcare system that would end health disparities, effectively control costs, and assure that everyone has equal access to an excellent standard of care.”

However, not all are in favor of expanding healthcare. A legislative analysis, released on May 22nd, suggests that the total cost of single-payer healthcare in the state could be as much as $400 billion – a price that many are not willing to pay.

According to a survey conducted by the Kaiser Family foundation in February 2016, while 50% of Americans would support single-payer health insurance, that number drops by nearly 20% when people are reminded that they may have to pay additional taxes and hand control to the government.

Unfortunately, SB-562 was pulled from the California Assembly by Speaker Rendon after a Senate vote on it passed.

Rendon said that the bill was “woefully incomplete,” in a statement issued on Friday, June 23rd. “Even senators who voted for SB 562 noted there are potentially fatal flaws in the bill…In light of this, I have decided SB 562 will remain in the Assembly Rules Committee until further notice.”

However, wider efforts are being introduced for comprehensive single-payer insurance on the national level. Senator Bernie Sanders is one such leader, spearheading the “Medicare for All” bill. He stated that “Healthcare must be recognized as a right, not a privilege… The only long-term solution to America’s healthcare crisis is a single-payer national health care program.”