In a time of turmoil for the recipients of DACA, Woodside makes its position known as a safe haven to all 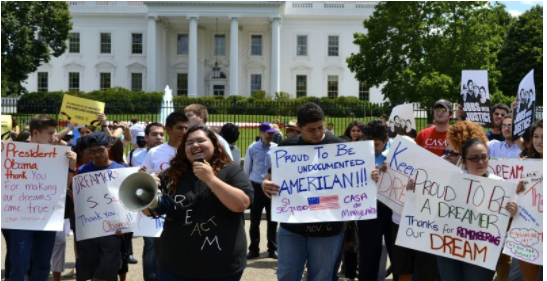 The country has been in a state of turmoil over the fate of the newly rescinded DACA (Deferred Action for Childhood Arrivals) program- and the decisions surrounding it will drastically and directly affect the students and staff of Woodside High School.

On September 5th, the Trump administration announced that they were repealing DACA, which serves roughly 800,000 residents of the United States. Children who were brought to the United States under the age of sixteen could previously apply for the program, which granted them legal rights to work and go to school in the United States.

The announcement has been followed by various inconsistent pronouncements: President Trump tweeted  “Does anybody really want to throw out good, educated and accomplished young people who have jobs, some serving in the military? Really!…..” only days after, drawing confusion from supporters and DACA recipients alike, who felt the tweet contradicted his administration’s decision.

The meeting has led to continued frustration across both sides of the aisle, especially for beneficiaries of the DACA program, who remain uncertain about their future as residents of the United States.

When asked if he thought anything would come of the meeting between Trump and Congressional Minority Leaders, Woodside teacher Greg Gruszynski said, “I’m more optimistic, although I think we should be pretty skeptical that anything will happen in Congress,” a tone most democrats have taken towards Trump’s recent actions.

Gruszynski is passionate about the fate of DACA. Although not a dreamer himself, the history teacher is active in politics and is one of the sponsors of a new Dreamers club on campus.

Yeni Jimenez, a Woodside High School librarian, is another sponsor of the club, which is meant for ‘allies and recipients’ of the DACA program.

When asked how the first meeting went, Jimenez responded: “The club [is] really opening up a space where students are being asked ‘what do you think?’” That space can be an opportunity for leadership- as well as uniting students who might have previously felt isolated in their situation.

The idea of a Dreamers club has come up before, but the club has never gotten past planning stages, due in part to a lack of communication between administration, students, and even among dreamers themselves.

“I think the problem is that this population really hasn’t had a club until now, haven’t had a way to discuss their ideas, meet with others…they really haven’t had a voice until now,” explained Gruszynski.

While clubs such as Young Latino Leaders and La Raza both target  Latinx students and problems they face, the clubs do not specifically address issues pertaining to Dreamers (while a majority of Dreamers are Mexican, it is not a prerequisite for the program). Nevertheless, there is club overlap- as Jimenez stated, “Members of La Raza and Young Latino leaders came, and I think they were like oh, this club could be relevant to our clubs.”

This is not Jimenez’s only tie to the Dreamers: her husband and his brother are both recipients of the program, and she explains that legal recourse is basically nonexistent, and the mood among dreamers is bleak.

“Now, dreamers are like, they know who I am and I know where I live, so what now? They want to do things the right way, but the process is terrifying,” Jimenez explains.

But despite the fear and uncertainty as to where the cancellation might lead, the Sequoia district  administration is doing everything they can to make the time of political unrest safe for Dreamer students.

In an email to the Sequoia Union High School District, superintendent Mary Streshly told the staff that “As educators, we have committed ourselves to a vocation that serves the purpose of safeguarding and positioning today’s students into tomorrow’s leaders…I want to take this opportunity to reassure our students that, despite the President’s position on DACA, we will continue being a district that welcomes all students, regardless of immigration status.”

The statement has also been reiterated by the majority of Woodside teachers, who feel strongly about keeping their Dreamer students safe amidst the unrest.

The WHS Dreamers’ club also seems to have been met with popular support from students, and the members hope that “more dedicated students – allies and dreamers – will come to meetings,” according to Mr. Gruszynski.

In a comment to the Woodside World, Superintendent Streshley said, “The student perspective has the benefit of being one that shapes policy both today, and in the future. For that reason, I am proud of the Dreamers Club, and the rest of our student led clubs.”

Policy-wise, the SUHSD passed a resolution in 2016 in support of undocumented immigrants, and is working with the San Mateo County Council to strengthen protections for these students within the district. But on a personal level, Jimenez has this piece of advice for the Dreamers: “Don’t stop dreaming. Things seem difficult now, but the bigger you dream, the more you can accomplish.”