The Battle Over the Student’s Body 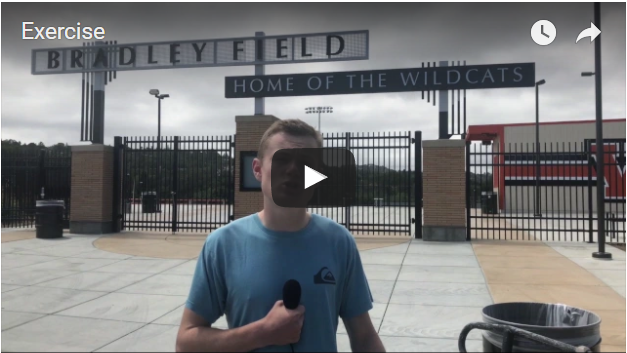 WOODSIDE, CA- An unorthodox theory about the practicality of exercise has emerged from the Oval Office, just as the Woodside spring sports season is drawing to a close.

On May 8th, the New Yorker released an article detailing an interview with President Trump, describing how he “considers exercise misguided” and sees the body as a “battery, with a finite amount of energy, which exercise only [depletes].”

These claims contradict modern scientific beliefs about physical activity and have stunned the scientific community and proponents of exercise throughout the United States and within the Woodside community.  Both students and school officials are voicing their concerns over the implications of the President’s statements.

Woodside sophomore, Ian Ramsey, a competitive figure skater who practices for over an hour every day, voiced his confusion about Trump’s claims and stood behind the scientific community’s consensus.

“I mean, in the short term I guess that’s accurate, but, realistically, you get stronger the more you exercise,” Ramsey reasoned.  “So it’s a dumb claim.”

Max Untrecht, a senior and member of the Woodside swim and water polo teams, practices for two hours three days a week.  He is saddened, but not surprised by the claims.

“It honestly doesn’t surprise me very much that he thinks something stupid like that because he thinks a lot of stupid things,” Untrecht revealed, indicating that the President had lost his trust long before.

In addition to students voicing their displeasure and opposition, the administration has also come out against the statements.

“The primary reason that we have athletics isn’t for the uniforms or for the competition, it’s so kids are getting some level of exercise, and this is an opportunity for them to do it after school,” Charles Velschow, the Woodside High School athletic director, told the Woodside World.  “There are so many studies that have shown that [exercise] helps you in terms of your brain development, it helps you in terms of your study habits and your health and well-being and how you see yourself.”

Both students and administrators worry about how the President’s scientifically false statements could affect Americans, especially at a time in which the National Institute of Health reports that 68.8 percent of Americans are obese.

“I think that this really impacts our ability to show kids that exercise is important for your health,” Untrecht said.

Some students, including Ian Ramsey, see Trump’s stance as a possible precursor to a more general attack on school athletic institutions.

“You could see something like [his statement], especially with the new secretary of education, [leading to the administration] removing physical education from schools,” Ramsay explained.  “For a lot of people it’s important to have physical education in schools.”

School administrators also believe that P.E. programs could be under threat.

Trump’s theories also run contrary to the beliefs of the school’s after-school athletic teams.  Each one of these teams’ popularity is partly based on the idea that long stretches of exercise are good for you.

“[His opinion] is very one-sided,” David Hartford, a cross country and track and field coach, told the Woodside World.  “It’s only looking at the negative aspects of some of these sports.”

Despite his Twitter account’s impressive 31 million followers, it seems like Trump’s opinion on this particular issue isn’t gaining traction at Woodside.  But, both students and school officials will continue to keep an eye on the possible political effects of his view.

Hartford admits: “There is such a problem with proper nutrition and proper exercise in the country today and I feel like this only supports the lack of activity that kind of gets pushed through.”