The effects of the Potential Cancellation of Obamacare on California 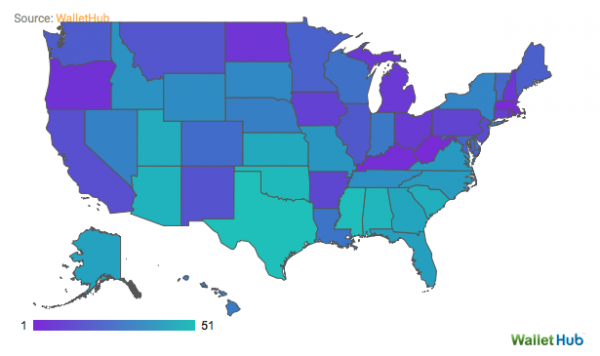 This map represents the amount of funding each state gets for its Medicaid program from the federal government. That funding would be eliminated with the repeal of the ACA. States most affected by the repeal have lower numbers and darker colors than states less affected.

The future of the Affordable Care Act is on thin ice due to pressure from President Trump and Congress to repeal and replace it.

The Republican-controlled congress recently released a bill backed by President Trump to replace the Affordable Care Act (also known as the ACA or Obamacare) with the American Health Care Act (also known as Trumpcare). Republicans have degraded the ACA, a signature achievement of the Obama administration, and they called for a repeal of the bill since its inception in 2010.

The American Health Care Act, or the AHCA, may not be a viable replacement to the ACA as the Congressional Budget Office (CBO) released a report on March 13th stating, “The increase in the number of uninsured people relative to the number under current law would rise to 21 million in 2020 and then to 24 million in 2026.”

While the direct effect of the new healthcare plan on California is currently unclear, World Studies and Economics/Government teacher, Pablo Aguilera weighed in on the potential impact of the Obamacare repeal.

“We’re still waiting on seeing how the state’s coverage will be affected,” Aguilera stated, “So maybe they’ll take away the ACA, but is Californiacare still going to be there; will that cover the people who are going to get off of [the ACA], I’m not sure,”

California is also in the unique situation that it is better off economically than many other states in the nation and could potentially cover for lost health insurance from the AHCA.

Aguilera stated, “We should have universal health care, and if there is a state that can provide that, it’s California.”

Although 24 million people will lose their coverage under the AHCA, even more could be left in the dust in terms of healthcare because of rising premiums. Premiums could rise 15 to 20 percent higher under the new plan, according to the CBO report.

History teacher, Jeffrey Juelsgaard stated regarding premiums, “The government needs to allocate a larger share of its budget to health care. If people’s policies could be subsidized more by federal and state funding, then their premiums would go down and more people would be insured.”

The direct effects of the repeal of Obamacare in California is currently unclear, but what is for certain is that millions will lose their health insurance and those that retain their health care under the AHCA could be subject to high premiums.

Aguilera said, “More people are going to lose their health insurance [under the AHCA] and then if they try to rebuy it, it’s going to be more expensive under this.”
This story was written before the AHCA was pulled from Congress on March 25, 2017.