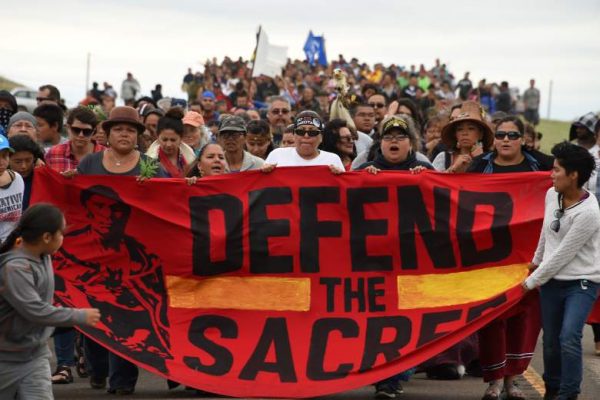 Construction of the Dakota Access Pipeline continues despite ongoing protests and environmental concerns.

The Dakota Access Pipeline, or DAPL, has been a controversial topic for over a year now, facing resistance from the Sioux tribe and other protestors that fear the health risk the pipeline creates. Its construction poses a threat to thousands of American’s clean drinking water.

“It threatens their drinking water supply,” Ann Akey, the Environmental Science teacher at Woodside, explains. “And we know that we’ve had spill after spill, and that their concern is real and valid, and that is a threat to them.”

The Obama administration intervened in December 2016 by halting the project, looking for alternate routes that wouldn’t pose such a hazard. However, the construction continued when President Donald Trump took office in January. The U.S. Army Corps of Engineers is in charge of whether or not the pipeline is safe, and they have faced different pressures from both administrations.

In addition to the immediate risk of a contaminated drinking supply, the DAPL enforces the United State’s continued reliance on fossil fuels, a nonrenewable energy source that will only harm the environment in the long term.

“We have the climate change aspect ‒ when you burn fossil fuels it creates climate change, we have the tremendous environmental destruction that’s taking place in Canada right now, where the tar sands are being mined, and finally we have the threat that the pipeline might break and get into the aquifers,” Akey explains.

Despite these pressing concerns regarding the pipeline and months of protests, President Trump signed an executive order in January to continue the construction of not only the Dakota Access Pipeline, but the Keystone XL Pipeline as well.

The DAPL is almost complete, with only the area under Lake Oahe, the water supply in question, to finish. The Sioux tribe has appealed to judges to retract permission for Energy Transfer Partners to lay pipeline in that area. With Trump’s decision to move the project forward, now the only thing still standing in the way of construction are the protesters’ persistence to camp out on the site.

The construction of DAPL represents the Native American’s continued struggle to have their rights respected and protected by the U.S. government.

“There’s this injustice that we’re treating,” Akey said, “With this history of such egregious behavior towards our Native American population, that we continue this.”