The Evident Rise Of Fake News

How sensationalistic stories are affecting the Election 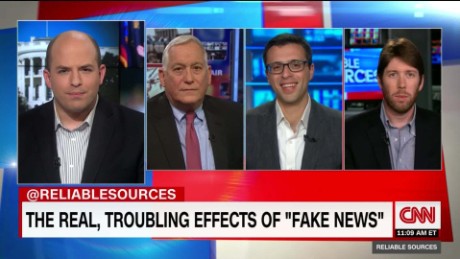 Throughout the history of journalism, sensationalism has been a trait noticeable by small-scale and large news outlets alike. This deceiving style still lingers in present day news.

Sensationalism, sometimes referred to as “yellow journalism,” grew in popularity during the 19th century, when sensationalized stories about the Spanish-American war increased America’s support. Around 1920, the invention of the tabloid led to constant front-page covers exaggerating crime and political rumors.

The primary reason why the hype for sensationalistic media has never died is because it has always sold well. From flashy headlines to magnified stories with little evidence, America’s society has always been attracted to what sounds interesting.

During this past election between Hillary Clinton and Donald Trump, numerous stories were released with little credibility or no evidence with intent to persuade readers towards one side. Darcy O’Brien-Holt, an English teacher at Woodside High School, believes it is important to do research on a news source before trusting their content.

“It is becoming increasingly easy to create media,” O’Brien-Holt commented. “Sometimes all it takes to check credibility is a google search of the website name, that can tell a lot.”

Shortly before the Inauguration of Donald Trump, Buzzfeed published a declassified report detailing a scandal with Trump, where he supposedly was part of “golden showers”.  To this day, no solid evidence has been supported with the claim.

Miles Reines, a junior at Woodside High School, says he was never convinced with the claim, primarily because it came from Buzzfeed.

“(Buzzfeed) has a weird reputation and they aren’t known for publishing news,” Gabe said. “They’re almost a satire website so I won’t be surprised if it is fake news.”

In response to the recent uproar of yellow journalism during the election, Facebook announced they will soon release filters where stories that have been flagged as not credible will be hidden. This is an attempt to educate users about important news without falling for deceiving headlines.

“I don’t think Facebook will stop all this fake news,” Gabe added. “In the end of the day, you have to use logic to determine what’s true.”