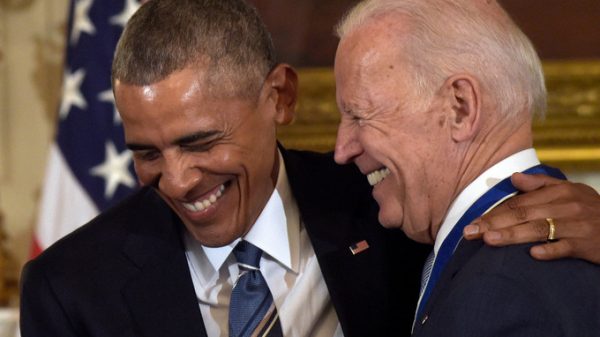 Tears of joy and sadness ran down Joe Biden’s face during a press conference on January 12th as he was awarded the Presidential Medal of Freedom with distinction.

As Obama prepares to depart from office, he took time to compliment Joe Biden on his progress and achievements in office referring to him as “the best vice president America’s ever had.” In return for his eight years of undivided attention to detail and service to the American people, President Obama presented Biden with the highest civilian honor plus distinction, an honor only previously given to Pope John Paul II, Ronald Reagan, and Lyndon B. Johnson.

The audience was just as surprised with the honor given to Biden as they applauded him with a standing ovation that lasted for minutes. Biden, shocked from the award had to turn away from the crowd and break out in tears.

“I had no inkling, I thought we were coming over for you, Barack, and I, and a couple of senior staff to toast one another and say what an incredible journey it’s been,” Biden claimed.

During his speech, the Vice President thanked those who supported him throughout his time in office.

“I get a lot of credit I don’t deserve, because I’ve always had somebody to lean on, from back in 1972, I learned from my sons Beau and Hunter, and I continue to lean on them, and in a bizarre kind of way, they raise me.”

Obama and Biden have been known for their close relationship throughout their eight years in office, and their “Bromance” was evident as Biden received the medal.

“This is the kind of family that built this country.” Obama stated. “That’s why my family is honored to call themselves Bidens.”