Obama’s Parting Words to the Nation 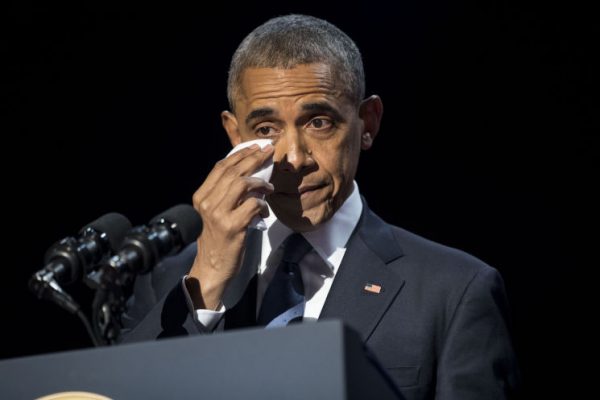 After eight years of presidency, 44th President Barack Obama delivered his farewell speech in Chicago. His goodbye speech elicited many reactions from the crowd and from his family who sat in the front row, supporting him during this emotional gathering.

“Superstition” by Stevie Wonder pumped through the speakers as people gathered to hear Obama speak about his accomplishments throughout his two terms. The music paused and BJ the Chicago Kid was introduced; the young man walked onto the stage and belted out the National Anthem. As he exited a loud voice announced, “Ladies and gentlemen, please welcome the 44th president of the United States, Barack Obama.”

People cheered and hollered from across the McCormick Place Hotel, clapping and whistling circle through the large crowd as Obama walked on to the stage. “Hello Chicago! It’s good to be home,” he stated.  Phones and camera’s rose into the air as he made his way towards the podium.

“One more year! One more year!” the crowd shouted as Obama struggled to finish his sentences over the roaring crowd. “I can’t do that,” was his reply, smiling at the enormous audience.

His speech began with saying, “Change only happens when ordinary people get involved and they get engaged and they come together to demand it.”

He continued by describing his accomplishments while in office. Taking down Bin Ladin, Health insurance and Marriage equality were just a few of his many achievements, all of which were followed by loud cheers from the crowd.

He discussed how he spent many years shining a light on the inequality in America and he made a point of acknowledging that the fight for liberties do not end because he is leaving office.

He told the audience, “The long sweep of America has been defined as forward motion. A constant widening of our founding creed to embrace all, not just some.”