A viral twitter campaign has bigger implications about just how common sexual assault really is in our society. 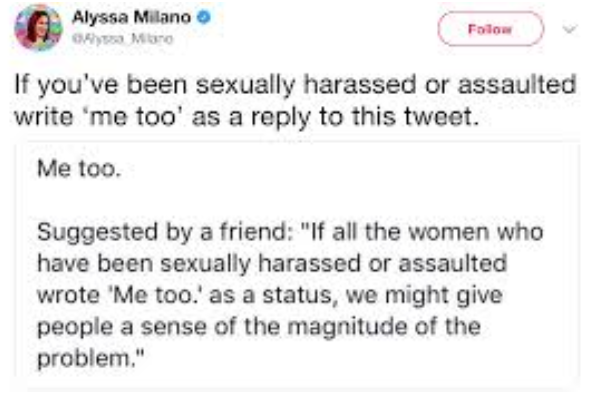 It’s been easy, in the past, to control the narrative of sexual assault by portraying assault as shocking, as isolated, as an accident. The viral social media campaign #MeToo is having none of it.

With over 1.7 million tweets, #MeToo gives a voice to victims of sexual assault and harassment. The hashtag, created by activist Tarana Burke, originally surfaced as a sign of solidarity with sexual assault victims of Hollywood producer Harvey Weinstein. However, it has quickly became a symbol of the fight against sexual harassment and assault women face across the country.

To half the population, the half who is taught to carry rape whistles and walk faster at night and are reminded that a man’s advances could cost them their job, #MeToo is hardly a shock.

Instead, #MeToo brings victims out of isolation and into the light, comforting them by reminding them that, tragically, their situation is far from abnormal. To remind women that they are not alone is to clear stigma around being the victim of assault and to remove the shame that comes along with it.

A student at Woodside who has declined to be named explains her experience with harassment on campus: “Whenever you walk past a group of guys and they look you up and down and maybe whistle, and you feel embarrassed.  I just walk faster. What else can be done?”

The embarrassment women feel from being harassed and assaulted stems from long-held cultural norms that social media campaigns like #MeToo can help draw attention to, but cannot fix.

As unfortunate as this reality is, it is necessary for those who wield the power to speak up and agree that not only is assault and harassment unfortunate, it is always the assaulter and harasser’s fault. But it is equally as important to admit that, a great majority of the time, it is men who are doing the assaulting.

Because the #MeToo campaign is predominately women speaking out, in order to change the way women are portrayed by men, men, too, must speak out and acknowledge the system that has given them the power.

For women at Woodside, #MeToo brings to light issues that resonate with all women, spanish teacher Amy Hanson explains.

“ [Sexual Harassment is] way more prevalent than people could even imagine…. A lot of things are ignored. It’s accepted that men can say certain things to women,” Hanson elaborates carefully.

With 1 in 6 women being the victims of assault, according to the National Sexual Assault Hotline, and over 65% having experienced street harassment, based on a Stop Street Harassment Now! Survey, sexual assault is an issue that deeply touches most women.

And that’s what makes #MeToo’s “shock factor” so disappointing. To those who grow up accepting harassment and fear as part of being a woman, the idea that men are so oblivious to the fear they incite, that they need a twitter hashtag to remind them of it, is deeply troubling.

A recent viral headline by online magazine Slate sums it up: “Do Women Like Being Harassed? Men in New Survey Say Yes.”

The headline drew contention from Twitter users: J.D. Altman responded to the headline with “Do Humans Like Being Eaten Alive? Sharks in New Survey Say Yes.” But all the more shocking were the results of the survey, which revealed that a majority of men do, in fact, think women enjoy street harassment.

Therein lies the problem. When sexual assault and harassment are not taken as seriously by men as by women, what can be done to fix a society that stands with the men?

It is extremely brave for victims of sexual assault to come forward, and their contribution should not be discounted. But at what point will our society realize that women cannot fix this problem by themselves?

#MeToo is an admirable cause, and it represents a step forward for victims of assault and harassment. But more needs to be done, and it’s not just women who need to do it.