Editorial: Good Morning, Bus. What School Do We Go To Today? 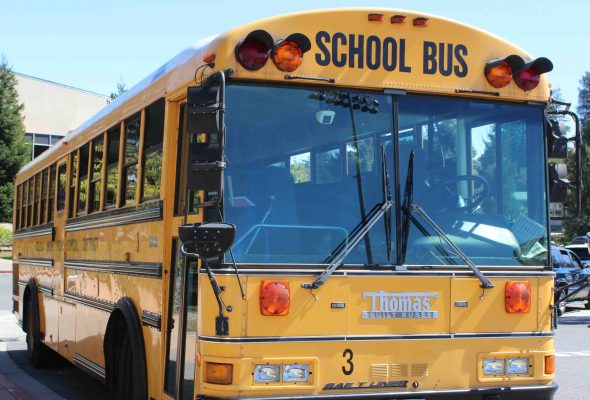 Among EPA’s population are high school students, many of whom attend a school in the Sequoia Union High School District. These students are predominantly Hispanic, Black, or Polynesian. However, the defining feature of East Palo Alto students is not necessarily ethnicity, skin color, or language, but rather income.

“If you from the G, the Mid, or the Vill… you grew up with a hard life–you just trying to make it out the ghetto,” Jay Johnson, a Woodside high school student-athlete from EPA, said.

EPA is home to many minority students who attend a school that is under the Sequoia Union High School District. Unfortunately these students are separated from their schools by highway 101 and city boundaries. There is a Charter school within EPA’s city limits, East Palo Alto Academy, that even offers financial aid to the financially-deprived EPA students–but this is done so through a lottery. As a result, most EPA high school students end up at an out-of-city public school.

The Sequoia Union transports students by a district bus. The problem with bussing the students from EPA is primarily traffic and distance. Roman, another Woodside High School student-athlete, and Jay describe the conditions they endure upon going to and from school.

“[Traffic] is from OTR [Over The Ramp] all the way down to the Dumbarton bridge” as Roman depicts. Jay told the same: “it has the most traffic everyday.”

As explained by two Woodside High School students that are residents of EPA, Roman Robertson and Jay Johnson, EPA is informally separated into various sectors that define an area in the city. Traffic differs around these areas of EPA but maintains its steady state of congestion.

“It depend on what part of EPA you from–you got the G, the Mid, the Vill, Flooda, and OTR [Over The Bridge]”

Upon re-zoning, district busses are rerouted to fit the school’s new boundaries and how they correspond to city limits. Redistricting occurs when a school is opened or, in this case, closed (Ravenswood High 1976). Its purpose is to shift populations around to better fit a school’s capabilities as well as offer “targeted populations”, primarily poor communities, a better alternative to miniscule education.

“The purpose [of redistricting] had to do with segregating. They tried to take the African-American kids and integrate them into a white school” explains Ms. Staves, a long-time, respected, and beloved teacher at Woodside. She said that the new zoning made the kids “happy to have a choice.”

Typical students living in EPA don’t have an abundance of resources–or choices and often take what they are given in terms of school and academics. Fortunately, however, the history of redistricting has always maintained an upbeat principle goal of exemplary education for all, according to the Sequoia Union District website.

“Providing quality education is a responsibility of our community. This has always been part of the vision we have in our district,” stated Dr. Jim Lianides, the Sequoia Union High School District’s Superintendent, in his newsletter.

In the same newsletter, Dr. Jim Lianides establishes that applications such as redistricting and pre-school year community outreach programs like Compass are meant to help “targeted populations.”

Ultimately, how does redistricting lead to better education for all students? Well, the answer is hard–it leads to a bigger questions which have to do with how these students are overarchingly benefitted–something that is still not translucent.

“I can’t see a way it benefits or harms me,” said Roman Robertson.

Districting helps with opportunities because it offers students, who live in EPA, a perspectively better environment–they otherwise wouldn’t have.

“Put it like this, if you grow up in EPA you see things at age you ain’t supposed to see” admitted Jay Johnson. Roman continued to say that districting “exposes you to a new environment.”

Life in EPA has changed tremendously since the 90’s when it had actually been declared the murder capitol of the United States in 1992.

“The small Bay Area city of East Palo Alto recorded the highest murder rate in the nation during 1992” wrote The Los Angeles Times in a coherent article written in 1993.

Gentrification began in the early 2000’s with arrival of the Ravenswood 101 Shopping Center–which brought less crime but did little to change a resident’s income.

A 2013 Census Bureau Report shows how  EPA houses 29,143 residents, a stable increase of approximately 1,000 people from 2010. The most recent recording is still a 4,756 resident decrease from 2009’s population according to the United States Census Bureau.

“It’s a very diverse city that’s coming up,” stated Roman. “If you from EPA, life is hard.”

EPA is a low-income, predominantly residential area, and, despite its name, is a city of itself–apart from the City of Palo Alto–within San Mateo County. The Sequoia Union High School District succeeded districting rights of EPA after the Ravenswood High school District was closed in 1976, and then demolished in 1995, to create the Gateway 101 Shopping Center, part of the EPA gentrification, located off of highway 101 inside East Palo Alto boundaries. The problem remains that all the schools these students are given entry to are across Highway 101 and outside the city boundaries of EPA.

“If you from Menlo [Park] you go to Menlo [Atherton],” said Roman and Jay.

Redistricting attempts to change this, as mentioned by Ms. Staves, Roman, Jay, and the Sequoia Union District newsletters.

The school boundaries determine a lot for a student–especially one from East Palo Alto. These kids don’t receive the same opportunities as children from neighboring cities do, so, the solution is to be more motivated. School provides an environment in which motivation is encouraged.

What the students coming from East Palo Alto have to understand is districting, zoning–the boundaries that keep changing are meant to be changing in their benefit; this is explained by the Superintendent on the Sequoia Union District’s newsletters. The most recent rezoning has stayed true to this principle but has fallen short in solving the various obstacles that accompany this objective.

“You’re not responsible for where you come from, but where you will go–what you’ll become.” -Ms. Staves