What's happening at Woodside this week? 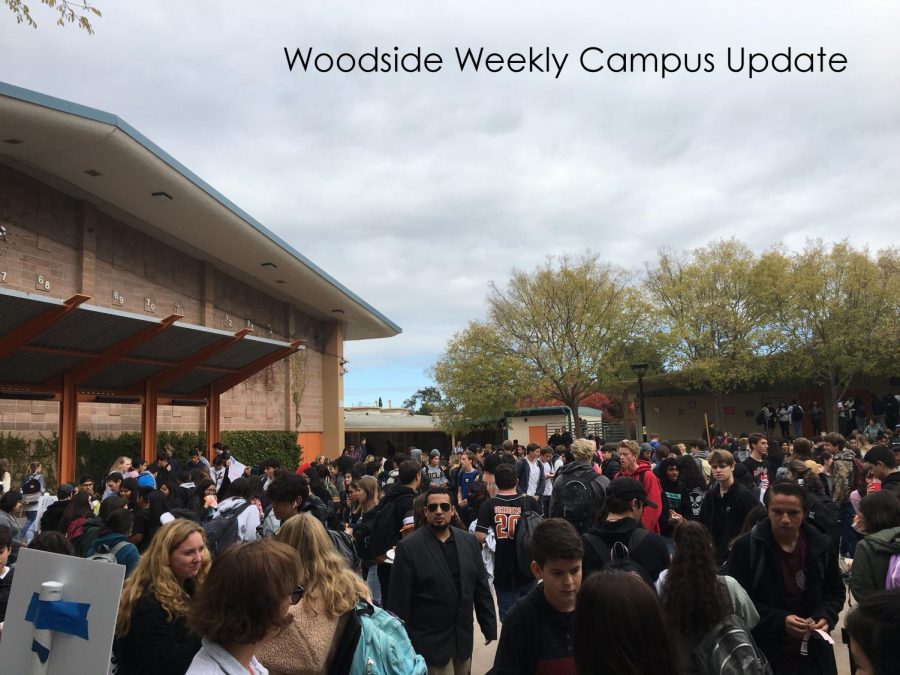 Leadership and Class Boards:
Currently, the seventh period leadership class is working on promoting the lunchtime staff and student four square game. This Friday the 24, anyone is welcome to come play four square in the New Gym. Fifth period leadership is planning a food fundraiser on Thursday after school in front of the admin building. They are also working on promoting themes for home basketball games and decorating the student section.

The sophomore class is working on fundraising. The junior and senior classes are currently trying to raise as much money as possible to bring the ticket prices for prom down. This year, the junior-senior prom will be held at the California Academy of Sciences on Friday, April 17; it is costing the school $50,000. If the junior and senior classes are unable to raise any more money, each ticket will cost about $90, but there will be fundraisers every Friday for the next month to help lower the cost of the tickets. The goal of the leadership directors and BOSA is to try to get the ticket prices down to $75 per person. On top of that, all of the money raised from Formal will go towards lowering the ticket prices for prom, so students are encouraged to attend Formal.

This year’s Formal theme is City of Stars. The dance will be held on February 8, and tickets will be sold starting on January 27 at $10.
Girls Soccer:
Woodside’s girls soccer teams are off to a great start this season. The Varsity team is currently placed first in their league with a record of six wins and zero losses. The Junior Varsity team has a record of three wins and three losses. They have a very strong defense but struggle when it comes to scoring goals. Varsity’s next game is Tuesday, January 21 at 4:30 against Half Moon Bay. Following that game, JV girls play at 6:30.
Boys Soccer:
The Boys Varsity Soccer team ended the week with an away game victory at Oceana High School in Pacifica last Friday, January 17. The game opened with an Oceana goal, followed by a second in the opening minutes of the second half. However, four quick goals from Woodside brought the score to 4:2, a much-needed win for the Wildcats.

The next boys soccer game will be played Wednesday, January 22 at home against Westmoor High School. Both games will at Bradley Field, with Varsity playing at 4:30pm and JV at 6pm.
Girls Basketball:
The girls basketball team has had a winning streak until their last game against Carlmont, during which they lost with a score of 23-42, but they won 21-19 against their major rival Sequoia (January 10).
Boys Basketball:
Boys Varsity Basketball dropped to 11-4 on the season last week after two rough losses to Carlmont and Palma High School. The week wasn’t all bad, however: the Wildcats did steal a win in Millbrae.

Woodside’s Junior Varsity (JV) team didn’t fare any better last week, as they continued their six-game losing streak. The JV team dropped both of their games, with one loss to Carlmont and another to Palma.

The freshman team lost to Menlo-Atherton, falling to 2-3 on the season. They will look to even up their record against Burlingame at Woodside on January 23.

Both Varsity and JV will play the San Mateo Bearcats on January 22, with JV playing at 4 pm and Varsity tipping off at 5:30 pm.
Wrestling:
The next meet is at Oceana HS against Aragon at 3:30 pm. The CCS Championships will be February 20 and 21.
Music Department:
The Woodside band’s first performance of 2020 was during the rally at lunch on January 10, where they played songs for the Woodside cheer and dance team. Later that day, they played at the boys’ and girls varsity basketball games.
Monday Clubs:
Last Monday, International Club students discussed some upcoming events for the second semester and shared ideas about having new programs and activities together with other clubs. The club will host a Valentine’s Day party in the beginning of February.

Octagon Club ended last semester; in total, the club completed 415 hours of service. One of Octagon’s upcoming events is volunteering at the Second Harvest Food Bank on January 25, where the volunteers will help set up, package, and organize food at Second Harvest Food Bank in Palo Alto. Octagon volunteers also tutor middle schoolers once a week for 45 minutes at Healthy Cities Tutoring.
Tuesday Clubs:
The Black Student Union (BSU) Club spent last Tuesday (1/14)’s meeting celebrating MLK’s birthday and planned a celebration for him in the quad for lunch on the following day. This Tuesday (1/21) they plan to recap MLK day celebrations in San Francisco that some of the club members attended. The club is planning fundraisers and events which will be shown in announcements to celebrate black history month.

Bring Change to Mind Club will continue to plan for their Flower Grams event, which will be held on Tuesday, February 4. Members plan to hand out free flowers in the quad with cards that have to/from messages, and students can write a message or compliment to someone and give them a flower. Their goal is to spread positivity on campus. The next two Tuesday club meetings will be planning for the event by printing cards, ordering the flowers. The following Tuesday will be the event.

The Tree Huggers Club is planning for an upcoming fundraiser (the club is still picking a suitable date for this event). Members are also planning for another clean-up project to be held on Saturday, February 1 in the Sakura 2 parking lot.

French Club is doing a club fundraiser selling T-shirts for 5 dollars each; however, stock is limited. French Club has recently been bringing in a new exotic french food for their meetings every week with this current week being a french cheese.

Toast Club was not held over the past couple weeks because of the advisor coming down with a sickness. However, the club is back to meeting every Tuesday with intentions to try new toppings. Recently, the club tried Vegemite.

Young Latino Leaders Club is planning to participate in club day. They hope to be able to collaborate with the other clubs during the event.

Debate and Jew Club have no new announcements other than meeting every Tuesday to continue current debates and discussions of recent Jewish holidays, respectively.