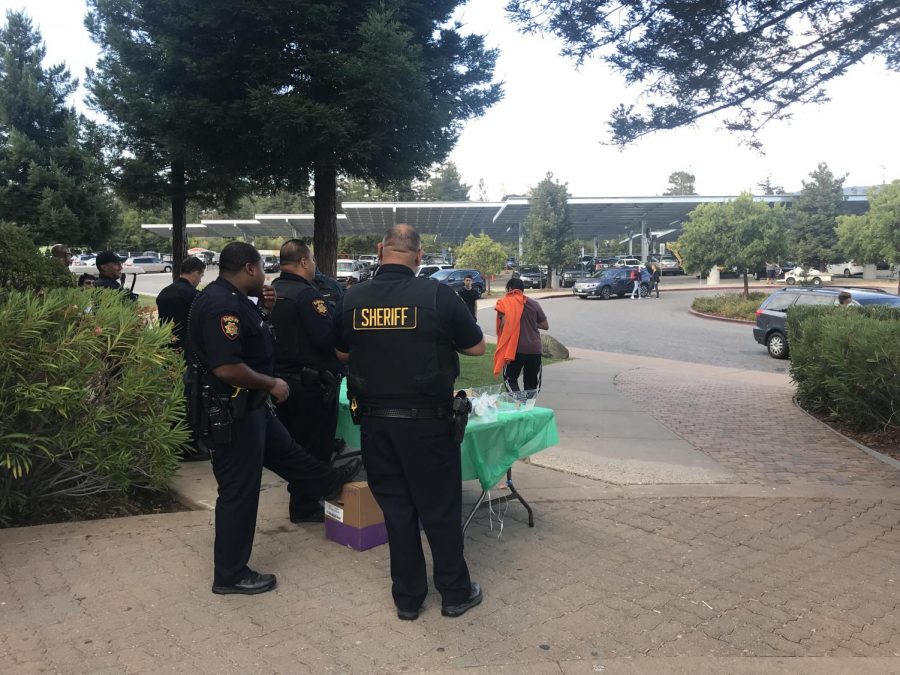 Sheriffs from San Mateo County stand behind a table with hot chocolate, cookies, and donuts for Woodside Students.

Four San Mateo County sheriffs came to visit Woodside High School with cookies and donuts for students arriving to their first and second period classes; however, the interaction has left some students with unsure feelings about having police officers on campus.

Two or more of the police cars were parked next to the Performing Arts Center from the time before first period though the start of second period on September 4. The officers handed out cookies and donut holes while students walked into school, but some assumed something was wrong when they saw the multiple police cars parked at school.

“They’re here to get me,” said one unnamed student to his friend on their way to class.

This event has taken place for several years at Woodside, but it is not the only instance in which multiple police cars have pulled up to campus.

“At first I thought ‘oh my God, they’re here for trouble,’ and then I noticed [what it was for], and it was very, very nice that they had this,” said Maricela Lopez-Prado, Site Parent Coordinator.

The sight, clear of trouble, was relieving for some, but others were still confused about the meaning of this event.

“It makes me feel as if there had been a problem or something like that because a police officer will not just show up,” Woodside senior Pedro Cervantes Coronal stated. “Arriving at school and seeing that there are a bunch of police officers here giving out coffee and donuts and talking to all the students makes me wonder why.”

Law enforcement officials have a bad connotation for many Woodside families because of the current immigration policies. Lopez-Prado explains that for the Latinx community the sight of a police officer can cause discomfort.

“Every time [the Latinx community] see[s] police, they think it’s because [there’s] a problem.” Lopez-Prado said. “Even me!”

Some of this discomfort comes from the current status of undocumented Latinx and the increase of border control along with the building of President Trump’s infamous wall. These federal actions increase fear in Latinx, who make up 49% of Woodside’s student population.

“I believe that a lot of those students feel scared,” Cervantes Coronal said. “Not very many feel comfortable because they know they are in the country illegally and well being at school studying and the fact they are outside of the classrooms it doesn’t feel very safe.”

Cervantes Coronal attributes the proximity and lack of announcement of the visit as main factors resulting in students feeling unsafe. Some parents were also surprised because of an email they received about the event.

“Yesterday one parent called me because they received an email saying that the police wanted to meet [students] from seven to nine,” Lopez-Prado said, explaining that the parent said, “‘Do you know that I work at that time, and I received that email this morning? I think I need to know in advance in order to ask for permission to arriving late.’”

Lopez-Prado expressed how there may have been a misunderstanding by the parent if the email was only written in English, but once she explained the reality of the invitation to just stop by and grab a treat, the parent was very relieved.

“When I explained that, she was happy, saying, ‘oh it’s a good thing and I would like to do that,’” Lopez-Prado said.

The police officers were very talkative with the students, but this behavior may have not come off as friendly to all students.

“I believe the way they behave is good,” Cervantes Coronal said in regard to the police officers on campus. “They’re doing a good job, but I just don’t know what they are trying to accomplish or gain.”

With growing tensions at the Mexico-United States border, some immigrants are skeptical of their local law enforcement.

“I believe that they want the students that do not have permission to be in this country to feel like a little better about being around the police, and be like ‘oh we’re going to give you breakfast,’” Cervantes Coronal stated, “but I still feel like they will never truly know how it feels [to be an immigrant].”